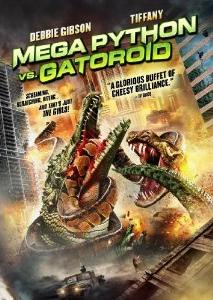 I miss Bill Hicks. Who doesn’t? Inarguably one of the greatest comedians of all time, one of the most astute political commentators, one of the sharpest satirists, one of the most uncompromisingly honest performers ever. Taken from us far too soon by, if I recall correctly, pancreatic cancer.

I saw Hicks twice. Once in Nottingham and a year or so later in Stoke-on-Trent. On that second occasion, I actually got to interview him. I was at uni, there were plans for a student magazine, it never came to anything but while it was a possibility I used it as an excuse to contact the promoter and arrange a pre-show interview with hot US comedian Bill Hicks. The student mag didn’t appear but I later sold the interview to a short-lived comedy mag called Squib (co-edited by Douglas Adams’ Footlights comedy-writing partner).

Let me just clarify this because it’s something deeply cool of which I’m actually quite proud. I met Bill Hicks. I didn’t just meet him, I spent about 30-40 minutes alone in his company asking him questions about himself, his life and his work, I recorded all the answers and he autographed a cassette for me. (Shows how long ago this was: Hicks’ first comedy album was only released on cassette. Wow.) 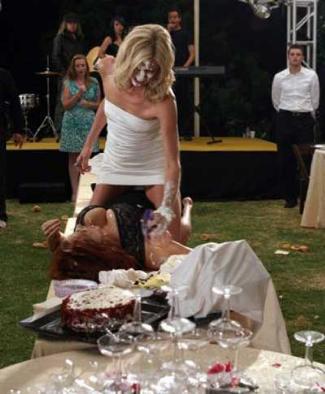 Hicks was a fascinating man. He was warm and open and honest and really not tremendously different from his stage persona. Bill Hicks on stage was Bill Hicks. By this stage, just a year or so before his sudden passing, he was talking in his act about how he had given up smoking - but he had puffed on one while we were talking.

Oh, I do miss Bill Hicks. So much unfulfilled promise. Don’t you ever wonder what he would have made of the Iraq War. He would have absolutely skewered that sucker.

So what has all this got to do with Mega Python vs Gatoroid? Well, this film seems like an homage to Bill Hicks. Remember that bit about the “two little peach fishes”?: “Oh Debbie,” “Oh Tiffany. “Oh honey, why have we never tried this before?” Well, here they are Bill, here they are. Debbie Gibson and Tiffany, rolling around together at last. They fight, they throw food at each other, they end up in the water. I am certain (and not because I paused the disc) that at one point Debbie Gibson forcefully and deliberately pushes a handful of whipped cream into Tiffany’s cleavage. It may quite possibly be the single most erotic thing I have ever seen.

‘Deborah’ Gibson of course resurfaced from years of relative obscurity in 2009 in The Asylum’s genre-defining monster face-off Mega-Shark vs Giant Octopus. The following year, always ones to trade on a successful formula, The Asylum made Mega-Piranha - starring that other teen songstress of the late 1980s Tiffany. It was obvious what would happen next. I wanted it, you wanted it, the ghost of Bill Hicks wanted it. As sure as Freddy would eventually meet Jason, as sure as the Alien would one day square up against the Predator, it was obvious that these two cult icons would meet on screen.

Sure, the film may be called Mega Python vs Gatoroid but its raison d’etre, its high concept, is not the meeting of a giant alligator and a giant snake, it’s Tiffany and Debbie having a cat-fight at a party and ending up in a lake. That’s what we’ve paid to see and what the film quite happily delivers in a way that only The Asylum would have the balls, the chutzpah, to do. Roger Corman wouldn’t have bothered, that’s for sure. Still, just like the man famously said about Freddy vs Jason when the umpteenth script of that failed to get made: “What do they do for the other 85 minutes?” 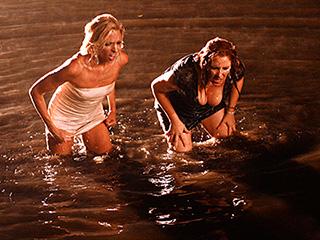 In a stock footage Everglades, Tiffany (39) is Terry O’Hara, some sort of wildlife ranger, and Gibson (40) is Dr Nikki Riley, some sort of animal activist. With her two acolytes (Arden Cho and Carl Ciarfalio), Riley is in the habit of stealing people’s pet snakes and releasing them into the wild, despite the effect this has on the local ecosystem. Just a week or so before I watched this, someone in Florida caught a 15-foot Burmese python. They are decimating the local wildlife. Not that the film is bothered about that.

Ranger Terry is bothered about the local wildlife, or at least trying to preserve a dwindling gator population, and she withholds hunting permits from a load of redneck yahoos who are this close to having the words ‘gator bait’ tattooed on their foreheads. The problem starts when the local snakes start growing to extraordinary size. Not Mega Snake size (not yet) but certainly King Cobra size. Various people get killed by the snakes including Terry’s fiancé Justin (Carey Van Dyke, also in The Asylum’s Titanic II and A Haunting in Salem) so she decides that the only way to deal with these big snakes is to create even bigger gators. To this end, she illegally acquires some steroids, puts them inside shop-bought, oven-ready chickens and feeds them to the alligators.

Over the next six months, not only do the gators grow into leviathan, oddly-muscled monsters but the steroids get into the snakes when they devour gator eggs. And before you know it, there’s evidence everywhere of giant monsters, although apparently no-one has yet spotted the actual giant monsters themselves. A Martinez is Dr Diego Ortiz, a supposedly Native American(!) herpetologist called in to assess the situation, which predictably kicks off on the night that O’Hara is organising a fund-raising soirée for her wildlife charity, or something. This is where we get the Tiff-vs-Debs food fight. (Soap actor Martinez was in The Asylum’s The Terminators, the 1991 version of Not of This World and millions of TV episodes including Mission: Impossible and The Incredible Hulk.)

By the next morning, the two ladies, Dr Ortiz and elderly ranger Angie (Kathryn Joosten: The West Wing’s Mrs Landingham, also in episodes of Buffy and Charmed plus a Hellraiser sequel) are driving through assorted city blocks that are supposed to be Miami but obviously aren’t. They eventually solve the problem by, I think, luring the animals with pheromones and blowing up some eggs. Actually, I have no idea how they solve the problem and neither did the film-makers. Some stuff happens and then it’s the end. 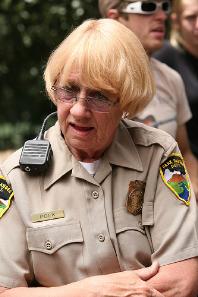 This is one of those films where the journey is more important than the destination and the journey is surprisingly fun. Scriptwriter Naomi Selfman, whose other Asylum gigs include 2012 Doomsday, Grimm’s Snow White and non-Debbie sequel Mega Shark vs Crocosaurus, has great fun showing how silly this is. “We’re feeding steroids to alligators. Nothing stupid about that,” says Tiffany as she thrusts a bottle of pills inside a chicken. There’s even a bit where Tiffany says “I think we’re alone now - there doesn’t seem to be anyone around”! (There may well be a Debbie Gibson lyric reference in here too but at no point does Dr Riley offer to shake someone’s love and I don’t know any of her other songs.)

The story is bollocks, of course. The CGI critter effects are embarrassingly poor, of course. The whole thing was made for about a dollar fifty and looks it. And the title doesn’t even make sense because it implies a single monstro-a-monstro face off à la Mega Shark vs Giant Octopus but actually there are dozens of both things. But none of this matters when there are two former teen idols MILFs having a food fight.

Also in the surprisingly good cast are Kevin M Horton as the other ranger, Sarah Belger (Titanic II, Claws and Fred Olen Ray’s Super Shark), Jay Beyers (an Asylum regular who was in Dragonquest, The Terminators, Mega Shark vs Giant Octopus, Transmorphers 2, Princess of Mars, Mega Piranha and 2010: Moby Dick plus, bizarrely a feature-length Harry Potter spoof), Harmony Blossom (Titanic II, Mega Shark 2 and, hmm, Super Shark - is Corman stealing The Asylum’s casts?), the wonderfully named Clint Brink as a waiter, Timothy E Goodwin (Bubba Hotep), Kaiwi Lyman (Mega Shark 2, Frankenstein vs the Creature from Blood Cove), Chris Neville (Komodo vs Cobra), Robert R Shafer (Mega Shark 2, Psycho Cop 2 and, yet again, poached by Corman for Super Shark), Vanessa Claire Stewart (who was in a Ron Ford movie!) and Kristen Wilson (all three latter-day Dr Dolittle movies and the pilot of TV series Shark - which disappointingly turns out to be about a lawyer). Plus Mickey Dolenz as himself in one of the great comedy cameos of our time.

Cinematographer Troy Smith worked as a Steadicam operator in the 1990s before making the move to DP with canine sequel Shiloh 2. But the biggest surprise is the director. Yes, it’s that Mary Lambert, the one who made Pet Sematary (and Urban Legends 3 and Halloweentown 2). 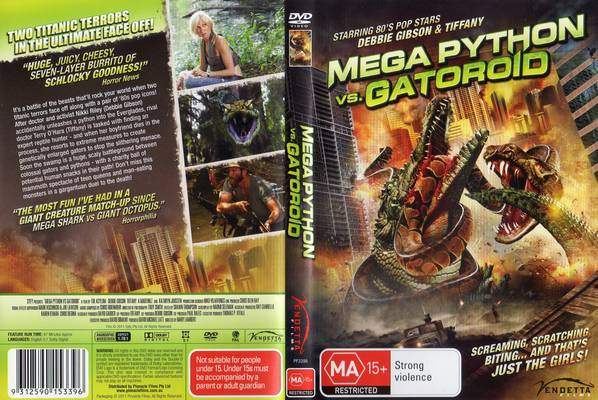 I enjoyed Mega Python vs Gatoroid, for all the wrong reasons, but The Asylum have my money so I doubt they care. Actually, no they don’t: I bought this in a charity shop. Well, they have someone’s money. Although rated 15, I was able to watch this with an enthusiastic eight-year-old: there’s no swearing, no drugs and, sadly, no nudity. I imagine the rating is for the handful of very fake-looking prosthetic heads that the gators and snakes cough up.