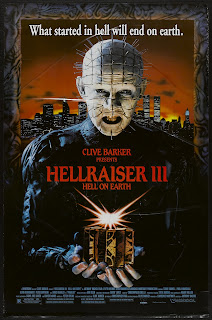 Many, many years ago I saw Hellraiser, probably on its first TV screening. I recall it being very good. I don’t think I ever saw Hellraiser II and I know I have never seen any of the subsequent six sequels - although I have read about them in Doug Bradley’s book.

Before I could review RN Millward’s fan film The Hellraiser Chronicles: A Question of Faith, I thought that I had better reacquaint myself with the franchise proper, so I wasted an hour and a half of my life watching Hellraiser III: Hell on Earth, a movie which, while it’s not quite as bad as Hellgate, is nevertheless utterly awful in almost every respect and something that no right-thinking person would want to include on their CV.

Terry Farrell from Deep Space Nine stars as the most monumentally miscast female lead in a horror film ever (apart from Julia Roberts in Mary Reilly, obviously). She is dreadful but even a good actress would struggle with this terrible dialogue, wafer-thin characterisation and nonsensical plotting. Poor old Doug Bradley spends the first half of the film in a large box with his face stuck through a hole in the front, which is supposed to be some sort of ‘pillar’ in which he has been trapped. Whereas Pinhead was an enigmatic and unnerving manifestation of evil in the first film (when he didn’t even have a name), by Part III he has been transformed into a stock monster spouting lame sub-Freddy jokes as he blasts people to pieces with his magical powers.

Much of the film takes place in a night club which, in the manner of these things, is brightly lit and plays music at a reasonable volume. There are a few weird statues on the walls as a token nod towards the fetishism which made the first film sexually powerful as well as horrific but for the most part all the absolutely integral S&M elements of the franchise have been stripped away from the story: there’s no M and virtually no S and all that leaves is an ampersand. Which, you know, just doesn’t do it for me on any level. 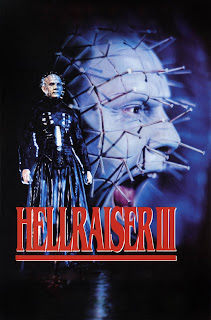 Farrell (whose non-Trek genre credits consist of Legion, Deep Core, Psychic Murders, an episode of the 1980s Twilight Zone, a Quantum Leap and the American Red Dwarf pilot) is Joey Summerskill, a bottom-of-the-rung TV reporter who doesn’t seem to work for any actual network or company but who nevertheless manages to live in a huge split-level apartment with gorgeous views of Manhattan. In a deeply stupid prologue she is hanging around in a hospital emergency room when a young man is wheeled in with chains and hooks stuck into his flesh. He is plonked onto the operated table and promptly explodes. Apparently, Joey has no story because there was no cameraman to capture it, although there are numerous witnesses among the medical staff.

Kevin Bernhardt (who was ‘Dr Byron Shelley’ in two Dracula-themed episodes of Superboy and also wrote the screenplay for Jill the Ripper) plays JP Monroe, narcissistic owner of the aforementioned night club, which is called The Boiler Room. He lives directly above the club, the sound of which can be completely muted by simply closing his front door (I told you the music was quiet) and his hobby is picking up girls downstairs, screwing them upstairs them throwing them out. He buys the Pinhead-in-a-box pillar from a weird art dealer and installs it in the club then moves it to his bedroom when it gets chipped (well, duh).

Paula Marshall (The Flash, Full Eclipse, Warlock: The Armageddon, WEIRD World) is Terri, gum-chewing wannabe gothette of no fixed abode who is a former ‘girlfriend’ of JP and who is Joey’s only clue to what happened (she finds her by asking if anyone in the club has seen “a pretty girl”, a description which one might think would need narrowing down a bit more). Eventually the pillar has consumed enough souls for Pinhead to break free and he goes on a rampage, killing everyone at the club in a sequence that is completely mishandled: everyone panics when they see him, but it’s just a bloke in a leather dress. Most goth nightclubs are full of them. Apparently The Boiler Room is in a part of the city so isolated that absolutely no-one is aware of this carnage and all the various explosions involved in it, although Pinhead causes a fake news report to magically appear on Joey’s unplugged TV, sending her down there to investigate. 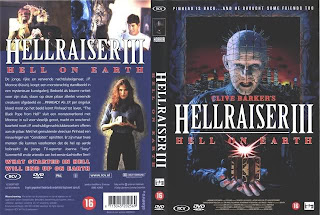 We then get to see one of the most awful and dumb chase scenes ever as Joey is pursued through empty streets (actually: almost empty, which is even dumber) by Pinhead, a few other Cenobites and lots of carefully controlled explosions. A couple of police cars turn up but the cops are killed and of course there’s no sort of back-up. The new Cenobites, by the way, are made from people who were at the club: the DJ (Brent Bolthouse pre-transformation; Eric Willhelm afterwards) has CDs stuck in his head and can shoot razor-sharp CDs from his flat, wide mouth; Joey’s cameraman (Ken Carpenter: Tammy and the T Rex - apparently dubbed) who got there before her has his camera melded with his head and can knock out people’s skulls with his telephoto lens if they get close enough; and the barman (played by scriptwriter Pete Atkins, who also wrote Hellraiser II and IV and the first Wishmaster) has some sort of deadly cocktail shaker.

Key to all this of course is the Lamont Configuration box which is stuck in the pillar and then comes into Joey’s possession and which enables her to beat Pinhead at the climax through a completely arbitrary bit of deus ex machina. She then buries the box in some wet cement, although why a deserted building site would have cement so freshly laid that you can plunge your hand easily into it up to the elbow is yet another unexplained piece of bad storytelling. The film’s one good idea is an epilogue set a few years later in the completed office building when we see that the designs from the box have been used to decorate the walls, turning the whole place into one gigantic Lamont Configuration - although whether that’s a good or bad thing I couldn’t say.

As well as playing Pinhead, Bradley gets to appear out of make-up as a First World War British officer who is apparently the character’s origin. Walking Joey through a corpse-filled Flanders trench and then 1920s Cairo, he unloads pages of infodump exposition on her; these scenes are related somehow to very badly staged dreams that Joey has about her father being killed in Vietnam. It seems that ‘Captain Elliot Spencer’ sought out weird S&M practices and demonic rituals as some sort of closure to the horrors of the trenches and frankly this is where the whole sorry mess of a film tips over from being just badly made and risibly scripted to actually being naive and offensive. To compare sadomasochistic sexual practices with the horrors of the Belgian front is in incredibly bad taste, detracts from what little enjoyment the film may give and is appallingly disrespectful to the millions who died there. 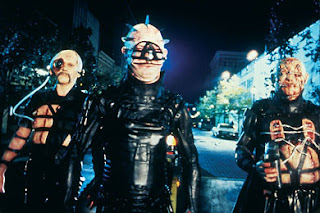 Astoundingly, Hellraiser III is not a stravisnut but actually played theatrically. I can’t imagine how pissed off I would be if I had paid good money to see this at the cinema (my copy was one of 20 films that I picked up for £9.99 so I just about got my 50p’s worth). This version includes a couple of shots which were apparently cut from earlier releases. Whoop-de-doo.

Ashley Laurence from the first two films makes a brief appearance in a video recording of a police interview, and most of the rest of the cast are stuntmen and stuntwomen. Producer Lawrence Mortorff (Children of the Corn II, Tarzan and the Lost City, The Omega Code), director Anthony Hickox (Waxwork I and II, Sundown: The Vampire in Retreat, Full Eclipse, Prince Valiant) and his brother James (editor on this film; director of Children of the Corn III, Blood Surf and The Gardener) all make cameo appearances and Clayton Hill (Dawn of the Dead) turns up as a priest in a scene where Joey tries unsuccessfully to find sanctuary in a church. Embarrassing beyond belief, Pinhead’s mockery of religion neither shocks nor impresses and is a half hearted attempt to ape the charred-black Catholic guilt which underpins Clive Barker’s work. The whole scene comes across as merely childish, like a thirteen-year-old trying to shock their parents by wearing a sweatshirt with a swearword on the back. 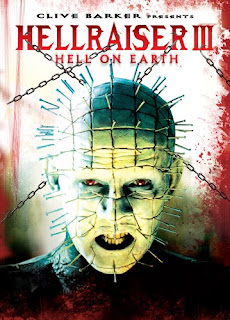 Clive Barker is credited as executive producer but I can’t believe his contribution went beyond cashing a cheque. To be honest, I suspect most of those involved did this for the money. I’ve met Messrs Hickox J, Lively, Bradley and Keen and all are much better at their jobs than this by-the-numbers film suggests.

The oddest thing in the credits is the fact that Carol Sue Baker gets her name in letters three times as big as anyone else - including the stars and the director - for being, um, ‘music supervisor’. Her other credits include Sex and the City and Monster’s Ball and she must have one hell of an agent.

Hellraiser III is a pathetically lame film which does almost everything wrong, the epitome of the crap sequel. I don’t normally quote other reviews but my mate Kevin Lyons summed it up perfectly over at the Encyclopaedia of Fantastic Film and Television: “The film itself is full of unlikeable people doing obscure things for no discernible reason.”