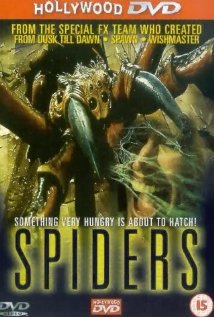 Spiders holds a special meaning for me, as it was seeing this Nu Image movie at Cannes 2000 that led to my two interviews on British breakfast TV that week. It’s a very enjoyable giant bug romp and let’s face it, you simply cannot go wrong with giant bug movies. Even the bad ones are good and Spiders is actually a pretty decent movie.

Intriguingly, the publicity fliers distributed at Cannes carried a synopsis for a story entirely unrelated to the finished film, all about an Incan mummy and a ‘proton interferometer’. What actually happens is that a space shuttle crashes near a military base, releasing a spider which was being used in orbital experiments but has become mutated. The title Spiders is, incidentally, a bit of a misnomer as there’s only ever one spider - well, one at a time.

Lana Parrilla (Spin City) and Josh Green (Curse of the Puppet Master) are the young people investigating what’s going on, while Mark Phelan (who has a healthy career playing cops, doctors and security guards in the likes of MANTIS, Doctor Mordrid and 12:01) is the government agent opposing them. Some of the spider effects are, frankly, embarrassing, as hapless actors struggle with largely inanimate puppets like a 1950s Tarzan wrestling a rubber alligator. But stick with the movie, because once the spider becomes large enough to render in CGI it’s absolutely awesome! The giant arachnid rampages through the town, crushing cars and knocking down lamp-posts - that’s what we want to see! 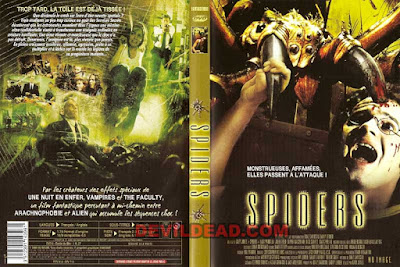 Spiders has a decent script by Stephen Brooks (a former Visual Effects Supervisor who also wrote the otherwise unconnected Spiders 2) and is smoothly directed by Gary Jones, helmer of Mosquito (another giant bug romp), Crocodile 2 (another Nu Image nature-amok flick) and various Hercules and Xena episodes. Cinematographer Jack Cooperman was responsible for the underwater footage in Star Trek IV and also worked on Hill Street Blues. Also in the cast are Billy Maddox (Deep Freeze), Jack Ott (Night Wars) and Jonathan Breck who played the title role in Jeepers Creepers and its sequel.

The US DVD sleeve image has no discernible connection with what happens in this film.