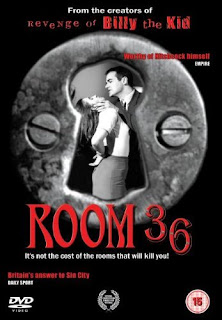 What a national treasure Brian Murphy is. Although he only ever seems to play variants on his George Roper character, frankly that’s good enough for me. He can make (almost) anything worth watching and his performance as the long-suffering manager off a seedy London hotel is the icing on the cake in this enormously enjoyable movie.

Room 36 (not to be confused with Mike Hurst’s Room 6) is black - dark black. It’s a black and white, blackly comic film noir which is as funny as it is grim, as stylish as it is intriguing. I loved it.

The Midlothian Hotel is the sort of paint-peeling, run-down establishment that survives by catering for travelling salesmen, one-night stands and DSS dossers. It is therefore just the right place for a secret switch of a roll of film for a briefcase full of cash. It is, unfortunately, also the sort of place which is in such need of repair that the door numbers can easily be chipped, resulting in not one but two Room 36s, one of which is actually Room 38.

Connor (Paul Herzberg: Charly Cantor’s Blood, The Dirty Dozen: The Next Mission) is the man with the cash in Room 38, a professional (in both senses of the word) hitman whose instructions are to hand over the briefcase then use the suspicious bulge under his jacket to get it straight back. His contact is Helen Woods (Portia Booroff, whose stage work has been supplemented by roles in The Bill, Minder and Crimewatch), a junior MP who is working for Sir Desmond Mitchell, tipped to become PM in the imminent election.

Mitchell is played by the great Norman Mitchell, who died during this film’s lengthy post-production phase and to whom the movie is rightly dedicated. He gives a terrific performance as a character whose complexity and untrustworthiness sums up every politician in Westminster without descending into parody or satire. In a career which lasted more than half a century, Norman Mitchell amassed credits that included Frankenstein and the Monster from Hell, And Now the Screaming Starts, five Carry Ons, Beat Girl, Oliver!, Simon Hunter’s Lighthouse and Legend of the Werewolf plus recurring roles in Crossroads, Emmerdale Farm and On the Buses and episodes of The Adventures of Robin Hood, The Prisoner, Dad’s Army, The Goodies, The Tomorrow People, Ripping Yarns, Come Back Mrs Noah (as Mollie Sugden’s husband), Hammer House of Mystery and Suspense and Doctor Who.

Sir Desmond gives Woods a roll of film. We never find out what this McGuffin shows but we have to assume that if the right (or wrong) person owns it, the outcome of the election will go the other way. 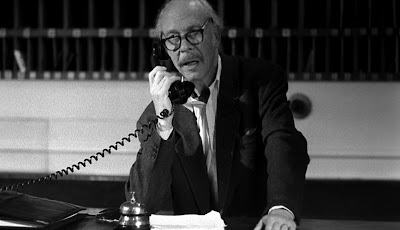 Next door, in the real Room 36, is Dick Armstrong, oleaginous travelling salesman in ladies underwear, played just this side of over-the-top by the great Frank Scantori (Witchcraft X), who is not only obese but also sports a Michael Bolton-style (‘sure got a lot of hair for a bald guy’) haircut. Armstrong is expecting a visit from a call girl provided by his regular source, Madame Desiree. What is more, he is on for another romp later on with the chambermaid (Darby Hawker, who was in Ken Campbell’s The Warp). Scantori, incidentally, is the writer and director of another British film that seems trapped in limbo, Warrior Sisters, with Booroff in the cast.

The broken room number is the trigger for the confusion and misunderstanding which drives the plot, but what could have been a broad, Carry On-style knockabout farce becomes instead a wonderfully sly Hitchcock-ian thriller with a lightness of tone that never overpowers the action and the intrigue.

Call girl Kate (Nicola Branson: Darklands - just credited as ‘prostitute’ on screen) calls at the wrong Room 36. Connor is surprised to see his contact acting so flirtatious, but of course they are both talking about money. When it becomes clear that a mistake has been made, Kate is understandably terrified. Connor casually shoots her and stuffs her under the bed before Woods enters. There is a wonderfully tense scene as Woods sits on the bed and a hand flops out, unseen, between her feet. It’s a measure of the script quality that this is not just an arbitrary movement but ties in perfectly with the setting: Connor whacks a cockroach on the other side of the room and the vibration dislodges Kate’s arm.

A violent struggle is inevitable, during which the make-up container in which the film is hidden becomes lost. Woods escapes to the next room - Room 36 - where Armstrong assumes that she is the long-overdue classy prostitute which he ordered. His rambunctious gropings of the panicked (and understandably revolted) Woods form an extraordinarily well-directed and well-acted scene, culminating in his death by champagne bottle. This is violent without being sick, bloody without being gory and comic without being silly. The two actors tread a fine balancing act to bring off a scene which could very easily have toppled into either outright horror or unabashed comedy.

So now Woods and Connor are in adjoining rooms, each with a dead body. She knows she has been set up, he knows that his usual meticulous planning has gone awry. Mitchell learns, by phone, that everything has gone wrong and walks away to let them sort it out themselves. 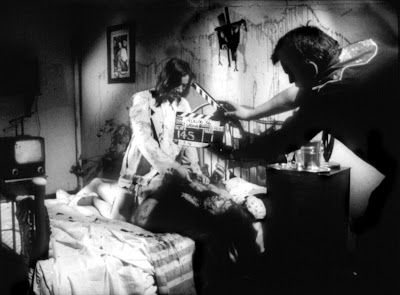 The story takes a slight detour while Woods directs Connor to a nearby bar to do the swap so that she can blag her way into his room and search for the film (which he assumes she still has). Picking a fight by accident, Connor loses his locked briefcase, which is picked up by Bert (John Cater: Captain Kronos - Vampire Hunter, The Tenth Kingdom, both Dr Phibes movies, Alien Autopsy and forty years of cult TV from Out of This World to Chucklevision), an old guy from the hotel who spots an opportunity. With Bert disposed of and the case returned to its owner, Connor returns to the hotel and negotiates with Woods through the door of his room. They both have something which the other one desperately wants, but she needs to escape with her life and he needs to rescue his pride and reputation. Who has the upper hand?

Weaving through this story are the staff and guests of the Midlothian, including exasperated manager George (Murphy, whose previous film work includes The Devils and of course Man About the House, arguably the funniest sitcom spin-off feature of the 1970s), bubbly receptionist Trisha (Jackie D Broad) and bone idle porter Bob (Paul Garner, sporting hair even longer and more lifeless than Scantori’s; he also gets a production designer credit and worked in the art departments of Gormenghast and Beyond Bedlam). Room 36 is constructed in the manner of a Shakespearian play, following at the same time the interweaving and complex machinations of the court (Connor, Woods, Mitchell) and the down-to-earth honesty/dishonesty of the kitchen (George, Trisha, Bob et al).

The large cast also includes Sara Dee (Witchcraft X, Warrior Sisters), Paul Cotgrove (writer/director of Green Fingers), John Gugolka (A Challenge for Robin Hood), John Forbes-Robertson (The Vampire Lovers, Vault of Horror, Venom and Vegend, I mean Legend, of the Seven Golden Vampires) and Crispin Harris (Friar Tuck in Blackadder: Back and Forth) as a police inspector. The film is billed as ‘from the creators of Revenge of Billy the Kid’ and this is very true indeed. Among those who worked on both films are writer/director/producer Jim Groom, writer/producer Tim Dennison, writer/cinematographer David Read and actors Broad, Mitchell, Gugolka and Scantori. 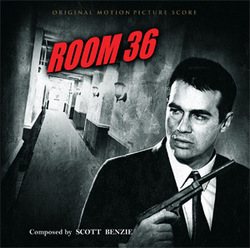 Room 36 is Jim Groom’s second feature, more than ten years after Revenge...; his directorial debut, however, was actually the UK trailer for Day of the Dead which had to be created specially when the BBFC banned the American trailer. Tim Dennison, who shared line producer duties on Beyond Bedlam with Groom, has a track record remarkably in tune with this website. After AD-ing on productions such as the Little Shop of Horrors remake and the Max Headroom pilot, he produced Lighthouse, Silent Cry and Evil Aliens. Richard Mathews, who co-wrote Revenge... (and The Mumbo Jumbo and the remake of Greyfriars Bobby!), receives a 'story consultant' credit.

DP David Read, whose background is in news and industrial films, contributes a great deal to Room 36’s success with magnificently evocative monochrome 35mm cinematography that gives the film an otherworldly feel, an ambience out of time - rather handy considering the huge lag between filming and release! There is one sequence in colour, some sepia-tone flashbacks and a handful of computer-generated colour inserts in black and white shots - and this use of occasional colour is expertly judged. An effective orchestral score by Scott Benzie (Soul Searcher) adds to the atmosphere.

The film’s website is definitely worth checking out [Seems to now be defunct; here's a version on archive.org - MJS], especially the PDF download which includes a summary of all the things that went wrong during production: labs catching fire, the film stock being discontinued and so on. When Room 36 comes to DVD, I hope there will be a lengthy and detailed Making Of [Indeed there is - and I'm in it! - MJS], detailing all these trials and tribulations. In fact, there’s probably a film to be made about the making of Room 36 but I suspect that Groom and Dennison don’t want to make that because, extrapolating from their first two features, we probably wouldn’t see it until about 2025.

Room 36 had a limited theatrical release at a couple of cinemas in London in late 2005 and a broader release is planned for 2006. I urge you to do yourselves a favour and go see what is undoubtedly one of the best British movies of recent years. It is almost impossible to find fault with this - and if I didn’t have so many other films in my To Be Watched pile, I would stick it back in the DVD player and watch it all over again.

Email ThisBlogThis!Share to TwitterShare to FacebookShare to Pinterest
Labels: 2005, UK