Special effects on short-lied TV series Strange were the responsibility of Neill Gorton (whom I had first met on the set of Breeders). I spoke with Neill during my set visit in October 2002. This was another joint interview with David Richardson of Starburst.

What’s your brief for the show?
"Not a lot of money and make it look spectacular. It’s been a bit crash-bang-wallop because we only started the first week of September building anything. And as you can see, on the stage over there we’ve got a 14-foot high tree demon with 30-foot armspan, all moving. It’s dangerous stuff. But ‘get it done’ was mainly the brief. We did some sketches, sorted out the different things. It was trying to find a design ethic for the whole show. Because everyone’s seen Buffy and those kind of things - people are always going to make those sort of comparisons - so it was trying to do something a bit different.

“So with the tree, we started out with human-sized things and slowly built our way up and in the end said, ‘Let’s do something impressively huge that will take up a good chunk of the room.’ That’s when you go, ‘Okay, it’s got to be twelve feet tall...’ Then we just did some sketches, some models, got a quick approval and just crashed into building it. We just sculpted about half of it, fabricated the other half. It’s on the stage, on a platform there. All the arms are on big bungee cords coming down, the head’s on one big pole. There’s some mechanical stuff. The more you can just drive directly with rods and poles and things, the safer you are. The more cables and pulleys you’ve got, the more chance they’re going to snap."

Are the guys in green suits operating it?
"Yes, they’re operating all the arms. But the whole point is: what’s great about this show is we’re working with a company called No Strings Attached, which is Alan Marques. Alan and I have known each other about twelve years and we’ve worked on loads of shows together. When I came on to this, they were talking digital and I suggested they go to Alan. The good things is I know that I can build something and do it a certain way and I can just call Alan and he’ll go, ‘Yes, do this and I can get rid of those rods and poles.’ Between us, we can make this work. It’s very much a marriage of what we’re building and what Alan’s going to do to get rid of all the people and the rods and make it work. It’s good to have someone like that as back-up. There’s several things on the show where we’re just working hand in hand and it really helps."

What other things have you built?
"We’ve done a Frankenstein monster kind of thing which is an amalgam of various characters who have been chopped up and put together. That was a full body prosthetic on an amputee. His left arm at the shoulder is missing, so the idea is that the creature is unfinished. We did full-body prosthetics, but the head had to be the head of a specific character so we did a likeness prosthetic of the actor to put on the amputee, and then on the actor we did a shoulder prosthetic, so we could cut between the two. That took us five hours to glue on all the prosthetics. 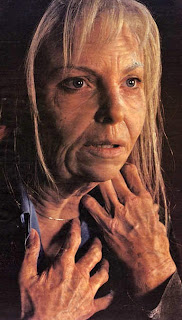 “We did an animatronic hand. There’s a character with a samurai sword which grows out of his arm, so we did a mechanical hand which splits open and this samurai sword shoots out. Next week we’ve got lots of ageing make-ups on Sam Janus. She goes from her regular age to fifty-something up to eighty-something. That’s all been a challenge with the prosthetics. This is film quality, not TV, because that’s what I do, mostly film. So hopefully we’re bringing a film quality and a film look to the show. The whole production has a film mentality and a film look, so hopefully we can give it that movie quality.

"This thing, the big tree demon, it was a hell of a challenge to get that up and going in the time. We’re about halfway through our list of things and so far, touch wood, we’re doing well. I’m looking forward to the ageing make-up next week - it’s something I specialise in so it’s going to be a nice thing to do. The whole thing’s been great fun. Great scripts, great team - fingers crossed, it could be a really good show."

Or even where you’ve said, ‘We can do this and do it better than you want’?
"Oh yes, we do that all the time. I never say to people, ‘we can’t do that’ because there’s always a way, but there are times when we go ‘well, you want just this but look...’ I mean, this tree demon was not defined and was thought to be a little thing and we went, ‘Look, we can make it as big as the room’ and everyone’s going, ‘Can you do that?’ ‘Yeah.’ What would be nice if the show carried on to more series, now that Andrew Marshall has seen what’s possible, he could let his imagination run wild and we could have even more stuff to do.”

How do you plan the effects for each episode, in terms of what will be real and what will be done digitally?
"What’s nice about this project, working with Alan, is that we’ve known each other for 12 years, we’ve worked together loads. He knows what I can do and I’ve got a good idea what he can do. So you sit in a room, in a meeting, and it’s sort of: ‘If you can do this, I can build this.’ We know how to augment each other’s work and you just find a line. If I run into a particular problem - like if I’ve got this giant creature and I’ve got to make the arms move - either I get into mechanics and hydraulics and stuff you just don’t want to get near, especially on this schedule, or you go: well, the simplest way is a rod, and CGI can deal with that. There’s just lots of little areas where we can help each other out - and that’s the way it should be.

“Unfortunately too many CGI people go, ‘We can do everything.’ I don’t sit there claiming I can do everything - I’m not that stupid - but some people, because it’s a newer tool, will say, ‘Hey, let’s use this tool.’ No, you use it where it’s going to work. Everyone got all excited about Jurassic Park and the CGI dinosaurs; yes, but they still had Stan Winston build lots of animatronic ones - and they used them. They wouldn’t have bothered if they didn’t think it was the best way. Even by the third one they were still doing it."

It must be easier for the director and actors to actually have the tree demon there.
"Well, imagine. We had a situation when we first got it on the stage. Sam Janus came in and they’d shot a scene the day before where she walks through the door and reacts: ‘Oh my God!’ And she walked in and looked at it and went, ‘Oh my God! I’ve shot the scene before this and I just didn’t react anywhere near big enough. Wow!’ That’s the thing. If you don’t see it, you just don’t know exactly how to react. You can interact with it, it’s physically there, there’s slime dripping off it. It gives the actors something to play off against. If it was all computer-generated the actors would just be staring into space or looking the wrong way."

What happens when you’re done with something that big?
"We were hoping to burn the bloody thing! The whole thing is meant to go up in flames but because it’s all polyurethane foam and the size of it, you couldn’t actually burn it on the set. We’re going to have a lot of flame pods around it. Neil Champion is doing all the flame work and will do all that safely so we don’t burn it. Then the suggestion was: we’re going to drag it into a field somewhere and set fire to it, and film that. Then the digital guys can take elements off that, because it will burn in the right shape, and they can overlay that in. But I think they’re just having trouble finding a field to do it in. I was quite up for it. People were saying, ‘Do you really want to burn it?’ Well, I’m not going to put it in my living room!"

Until they need it again for series three.
"Oh, we’ve got the moulds. I keep some things but you just can’t do anything with something that size. These kind of things are always the favourite things to have at the end of the shoot. I did From Hell and all the directors and people had the body parts. Marilyn Manson did some of the music - he’s got one of the dead bodies in his living room, under the coffee table. People want them, but if I kept everything I wouldn’t have any room to move in my workshop. I’m quite happy to see the back of most of it." 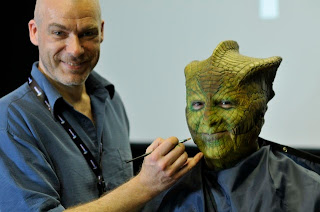 What else have you done recently or have you got coming up?
"Currently we’re also working on Tomb Raider II, The League of Extraordinary Gentlemen out in Prague with Steve Norrington, bits of TV stuff, just prosthetics here and there. Some bits and pieces for Jonathan Creek. Earlier on this year we did a movie called The Sin Eater with Brian Helgeland out in Rome. I do a lot with Steve Coogan as well. We just shot a thing of his called Cruise of the Gods, which is a thing about science fiction fans on a convention cruise; we just did some prosthetics for him. We also did Steve as a fat Alan Partridge for the new series. Before then we did Steve as Dr Terrible, so I’ve seen a lot of Steve Coogan this year. 24 Hour Party People last year. Very, very, very busy and it’s just getting busier. It’s been a non-stop year.”