Stag Night of the Dead 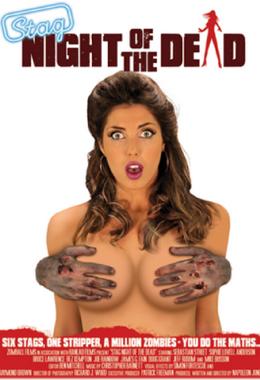 I try to like these things, I really do. Look, you know me. I’ve been championing dodgy low-budget independent B-movies for the best part of two decades. I do everything I can to promote pictures like Stag Night of the Dead, but when it comes to a review I have to be honest. I’ll cut a film some slack, I’ll give it the benefit of the doubt. But I can’t and won’t deceive you.

SNOTD has some original ideas and has been made with sincerity and enthusiasm. But I would be lying if I said I actually enjoyed watching it. In truth I was neither entertained nor engaged. Let me tell you what the film is about, and then what works and what doesn’t and, in the latter case, why - and maybe how it could have been fixed if picked up at an early stage.

Sebastian Street (Airborne, The Zombie King) stars as groom-to-be Deano, out on a stag do with his mates on the eve of his wedding. After ritual humiliation in a bar, a small group set off in a stretch limo (which doesn’t seem to come with a driver) for an activity session with a difference. On a disused army camp which is nevertheless full of military personnel, they engage in a bout of ‘zomball’, which is like paintball except that instead of shooting each other, you shoot zombies. 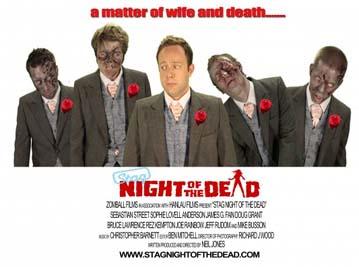 Dean, who arrives at the camp naked so togs up in his morning suit, is accompanied by stag-organiser Marky (Bruce Lawrence: Hardcore: A Poke into the Adult Film Orifice, Sisters Grimm, Back2Hell!) who is supposed to be a bit of a disreputable, shag-anything jack-the-lad but actually comes across as quite a decent bloke. In lieu of a Token Black Guy there’s a white TBG, DJ Ronny (Joe Rainbow: Night Junkies, Sisters Grimm, Zombie Resurrection) aka ‘DJ Hymen-Buster’ who is gleefully gangsta, very much in the manner of Lee Nelson (of Well Good Show fame - please note I only know of this show through trailers, I’ve never actually seen it).

There is also TC (James G Fain: Hardcore, Dark Rage), so-called because he has ‘Tourette’s Condition’ although he doesn’t act like he has Tourette’s, he just swears a lot. Plus Dean’s imminent father-in-law Gordon (Doug Grant) who is suitably dismissive of Ronny’s big man bluffery. There is a sixth bloke who seems to just be making up the numbers. Judging by the cast list this must be Sanjay (Rez Kempton, who was in Bollywood boy wizard parody Hari Puttar!) although I don’t remember him being Asian. That’s either a heartening vindication of our multicultural society or a demonstration of how bland the character is.

Finally there’s Candy (Sophie Anderson: Sinbad and the Minotaur) a statuesque stripper in a red PVC catsuit. It’s not really clear why she’s accompanying the boys to the zomball rather than just waiting at wherever she’s going to do the stripping, especially as we have already seen her stripped and whipping a naked Deano in the lengthy bar prologue. 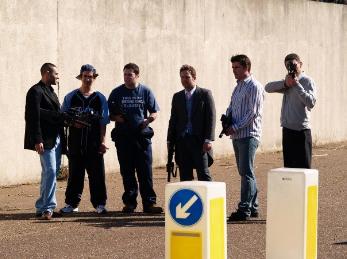 SNOTD takes a long time to get going. Once the gang arrive at the base there’s a whole load of malarkey about a large, flamboyant American civilian who is in charge. Credited as ‘Mister Ree’ and played by Jeff Rudom (Beyond the Rave) - who died in 2011 and to whom the film is now dedicated - his exact role isn’t clear. After explaining flamboyantly at great length the simple premise, he spends most of the film flamboyantly watching events on some sort of computer/videoscreen, attended by his dwarf assistant Mr Big (former Ewok Brian Wheeler).

Eventually, after a dragged-out scene between Dean and Candy, the male sextette pass through a gate to the zomball playing area, equipped with large guns. And here is where the film scores its biggest bellyflop. What do we expect in a zombie film? Well, blood would be nice. A bit of gore, a dab of grue, a soupcon of carnage and a spot of the old ultra-violence.

The guns are, in fact, stun-guns. They fire an added-in-post jaggedy ray which knocks out any zombie it hits. For five minutes. And the guns need recharging at strategically located charging stations every so often. So despite TC’s constant exhortations to “blow their fucking heads off”, no heads get blown off in any way. Some shuffling zombies fall over when hit by a zigzag zap that looks very like something from Ghostbusters (I still can’t believe that six grown men would do something like this without one of them saying “Don’t cross the streams”...).

“What begins as a fun but gory game soon turns into a fight for their lives” says the publicity but the game is about as gory as Monopoly. Frankly it doesn’t look particularly fun either. Although one of the characters subsequently enthuses about how awesome the experience was, what we see on screen doesn’t warrant any such enthusiasm. All you did, dude, was stand still with your pals pointing a ray-gun at some slow-moving people who then fell gently to the floor and lay there for five minutes. Sheesh, talk about easily pleased.

Sorry, but temporarily stunning zombies is no more fun to watch than it would be to participate in. Where is the thrill? Where is the excitement? For them or for us. In fact, what is the relevance of the zombies in all of this? If all the guns do is knock people out, you might as well use students as targets. At least they’d be a bit more lively and more of a challenge to hit.

I have no doubt that the stun-ray-gun thing is a cost-saving measure. Special effects make-up costs money. But look, if you can’t afford to show zombies being blasted in the head - don’t make a zombie film. Or just make a short. God knows there’s nowhere near enough story here to justify 80 minutes of running time. This could have been a half-hour short and the money saved from not shooting those extra 50 minutes could have paid for a box of squibs and a couple of exploding heads.

Here’s the second problem: there is no sense that the zombies are a threat. These are traditional shuffle-shoes drool’n’lurch Romero zombies. They appear some way up the road, hobble forwards, get zapped and fall down. We don’t see them attack anyone or anything in this part of the film. In order to give the sense that this is a dangerous, exciting game played with live zombies, two things were needed, both conspicuous by their absence.

First, the participants should have been togged up in basic body armour. Nothing over-the-top, just sporting padding, goggles etc, something to give the impression that what they are about to do is at least marginally more dangerous than hopscotch. If they looked like they were ready for combat, we would perceive the zombies as much more of a threat.

My second suggestion is that we could, in fact should, have been shown the zombies beforehand, attacking something. Maybe ripping apart an animal carcass. A demonstration of what could happen if our players don’t stay alert. Like chucking a lump of meat into a seemingly placid pool to prove that it’s full of piranhas. Either, preferably both, of these things would have made the film more exciting. Or exciting. But not a handful of guys calmly zapping a bunch of slow-moving, large, placid targets at a considerable distance.

After this fast-paced, thrill-an-hour sequence, the gang relax but then somebody lets the zombies out of their cages. We’re not shown how they are rounded up after their five-minute naps and returned to captivity. But then we’re not shown who lets them out. I was losing interest by this point but as I recall there’s a close-up of a hand slipping open a bolt. I don’t know whose hand it is, I was more wondering at the staggeringly lax security. Haven’t these people heard of padlocks? 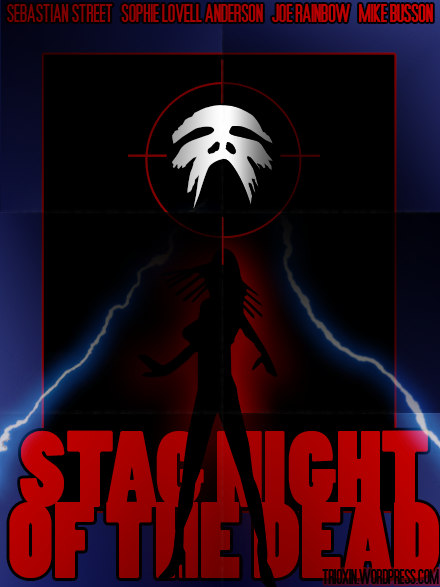 The plot, such as it is, surprisingly revolves around deliberately irritating and unfunny comic relief DJ Ronny. He falls in love with a zombie girl (who isn’t locked up or unconscious for some reason, nor is there any explanation of why she is not hungry for flesh). From there he decides to become king of the zombies or something and transforms into the film’s main antagonist. There is also an angry-looking military officer (1st AD Mike Busson, who was Randolph Gerbles in Hardcore) whose role isn’t clear. And quite what the large, flamboyant Yank is up to is anyone’s guess.

Stiff, old Gordon undergoes a transformation at what can roughly be considered the start of the third act but not enough is made of it. He’s not dull enough beforehand and not really dynamic enough afterwards. He seems calm and polite throughout whereas Gordon Mk.1 needed to be bored and irritated by the antics of the young men while Gordon Mk.2 should have been a testosterone-dripping, yelling action-machine.

But all of this is, to some extent, by the by, because after the zombies get loose - the geography of the base is never made clear - most of the film becomes a load of running and shooting (mostly still with those uninteresting stun-ray-guns) and it’s difficult to care about the characters inbetween all that padding. There is some sort of half-hearted explanation of where the zombies came from in a TV news report (delivered by ‘Georgina Romero’!) about bird flu. But you will learn far more from the film’s publicity than you can work out from what’s on screen. Also worth noting are commendably exploitative not-in-the-film promo images like the zombie hand-bra DVD sleeve and the rear-sleeve shot of Deano surrounded by morning-suit-clad living dead.

The acting is, on the whole, okay. None of the characters are particularly subtle or rounded so the cast aren’t called on to do a great deal. Jemma Lewis is Dean’s fiancée and Eva Gray (The 13th Sign, Dead Crazy) plays the future mother-in-law. Technically the film isn’t great, alas. The photography by Richard J Wood (Dark Rage, Blood + Roses) is grainy and at times looks like it was shot on 8mm and the sound is distinctly variable (almost certainly caused by the large number of credited ‘sound recordists’, which suggests a you-can-hold-the-boom-today approach). 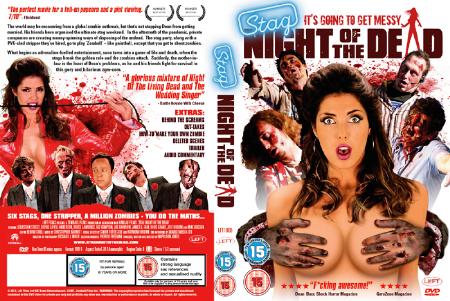 I was looking forward to Stag Night of the Dead, which premiered in 2009 and was released online in November 2010 before an eventual DVD release through Left Films in January 2012. But it doesn’t live up to its marketing campaign. I was expecting a mixture of sex, laffs and gore but all three boxes remain unticked. It may be that if your expectations are low, your blood alcohol level is high, your mates are jovial and your pizza has just been delivered - then the film could satisfy you. But in this house it counts as a good try but a miss.

Director Neil Jones is credited as ‘Napoleon Jones’ which might sound daft or pretentious but at least helps to differentiate him from the other 14 Neil Joneses on the IMDB, especially as one of those is also a British indie horror director. To be clear, this is not the same Neil Jones who directed The Reverend and Deranged.