Statica is bleak, chilling, disturbing and nightmare-ish - even the bits without me in them.

This is the latest film from Andrew John Rutter who just called himself Andrew John when he made 62 Pages. Among the cast is his brother Thomas Lee Rutter (Mr Blades) who just called himself Thomas Lee when he made Full Moon Massacre. The boys’ mum, Mandy Rutter is in the cast too as well as William Stafford, who played reporter Chester Marwood in Mr Blades, and regular Rutter collaborator DJ Nock. 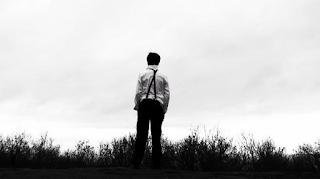 It was during the production of Tom Rutter’s slasher feature that Andrew asked me if I wouldn’t mind shooting a couple of scenes for his own short film and I was happy to oblige. Newspaper editor Raymond Burns’ office was actually the library of Stourbridge College and a different part of the room was used to represent ‘Statica’, a sort of ... well, I’m not really sure.

I never saw a script for this film, I was just given lines and told where to sit/stand/crawl. The idea (as it was explained to me) is that Statica is a drug which transports the user to a strange place - where I play the manager. One of my lines - “Statica offers.... absolute ... paradise!” - is repeated throughout the 38-minute film and in fact the first image on screen is my ugly mug.

There is some sort of Cronenberg-ian parasite slug that enters Statica at the same time as Andy Rutter’s character and my creepy, slightly bonkers manager character is trying to whack it with my shoe. I recall suggesting that in subsequent shots I should be hopping and then putting my shoe back on although that doesn’t come across terribly well because the picture is so tight on me (probably to disguise the fact that I’m in a library). 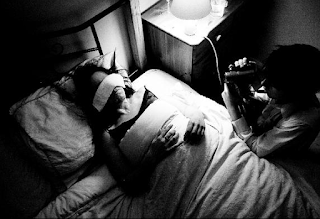 Frankly, and at the risk of blowing my own trumpet, I think this is my best screen performance so far and even I find my character creepy in places. It must be good because even Mrs S grudgingly admitted that one of my lines sounded quite good and not “just like you’re saying the words.”

You will notice that I have so far written about my own contribution to the movie rather than really exploring what it’s about. There’s a reason for that. Statica is decidedly non-narrative, an assembly of images and concepts that very effectively creates a druggy ambience on the border between coherence and randomness. Andy Rutter stars as a young man who is overwhelmed by the strain of caring for his bedridden (blind?) mother and by the imposition of his stern father who plays on the boy’s guilt to alleviate his own caring responsibilities. And so the son seeks relief in ever stronger narcotics...

There are some great images here including a stop-motion figure made from newspaper, a talking pile of vomit, a TV set chasing and killing a cat, a skeletal figure pulling its own face off - and the newspaper man recreated in real life. Throughout the nightmare, the young man is followed by, or follows, a mute, faceless, hooded character who seems to be working for me. 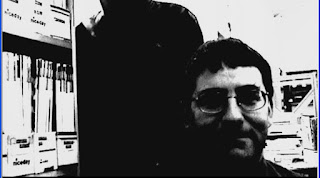 While it eschews narrative cohesion, I nevertheless found Statica more coherent and enjoyable than either the shorter Mr Friendly’s Pizza or the longer Frankensteins Bloody Nightmare, both of which are similarly chaotic in construction. The crisp black and white camerawork is excellent and the sound - so often the fly in the low-budget ointment - never falters.

I can see this one being a hit at festivals and deservedly so.