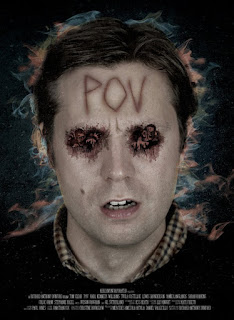 A few weeks ago I had the misfortune to watch Day of the Mummy, a cheapo monster movie which took ‘found footage’ to a new level by showing everything from the main character’s point of view. The conceit was that he was wearing some fake spectacles incorporating a small camera.

Well, P.O.V. takes that idea one stage further, dispensing with the camera and simply telling the story of the film solely through the central character’s eyes. By, presumably, requiring the actor to wear some fake spectacles incorporating a small camera. Actually I get the impression that Tom Clear may have had the camera atop his head, as his eyeline seems above that of his friends. Or maybe he’s just very tall.

Anyway, you can imagine how my heart sank at the thought of another ‘found footage’ style British horror film, after sitting through The Mirror and Dark Vision and Hungerford and oh so many others, right back to Vampire Diary and The Zombie Diaries and The Last Horror Movie. There’s nothing new or interesting to do with this idea. 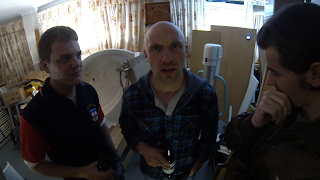 Or so I thought.

Clear (Eve’s Demons) plays Zack, a young man recently dumped by his girlfriend Ramona (Sophie Flack). His friends have decided to cheer him up with a big party, taking advantage of an empty building which is currently being done up by Zack’s mate, builder Mackenzie (Lewis Saunderson: Torn: A Shockyoumentary). The property was previously an old people’s home so it’s large with many rooms and corridors. Lots of identikit twentysomethings turn up to drink beer, dance and talk vacuous rubbish.

This first half of the film is admittedly very well done. It is, perforce, a series of very long takes with just a few invisible edits, harking back structurally all the way to Hitchcock’s Rope. The POV conceit is maintained throughout and never breaks or wavers. The cast acquit themselves very well. The lighting and sound are adroitly handled. But, ultimately, we’re spending 40 minutes hanging around at a party full of young people we don’t know. Maybe that’s interesting for twentysomething viewers but this old fart was just bored. I’ve got no time for young people, even ones like this who aren’t particularly obnoxious. 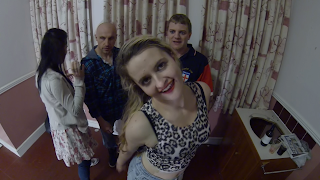 There is one exemption to the general lack of obnoxiousness, and that’s Zack’s brother Sam (Karl Kennedy-Williams), a belligerent, arrogant, misogynist dickhead who thinks he’s the life of the party, when actually it’s a relief for both characters and audience any time he’s in another part of the house. Still, at least Sam has a character; most of the others are just bodies and faces. Mackenzie is the other character who actually has a character, a nicely nuanced performance by Saunderson which paints the lad as a reasonable, sensible, supportive friend who nevertheless fits in as one of the lads. We also meet Sam’s lary, drunken sister Tash (Sarah Harkins) and unsubtle Lizzy (Tuula Costelloe having a whale of a time), a sparkly-eyed sex poppet who is determined to grab herself a slice of newly single Zack.

About half an hour in, Mackenzie recounts the spooky history of the building, which at least reaffirms that this is a horror film. Then around the halfway mark, Zack – and hence you and I – starts to see weird visions. As he dances with his friends, some of their faces start to become bloody or scary. 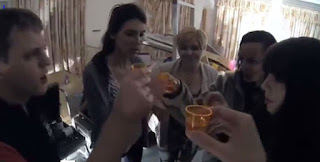 Shortly before this, we saw Zack persuaded to take some unspecified drug provided by his brother, so if there was meant to be any doubt or uncertainty about the reality of what he’s seeing… well, there’s none. He’s taken some drugs, and now he’s seeing scary things. Silly fucker.

This however is where the POV conceit actually works. In a regular film, we would repeatedly cut from the reality of what is happening – the reactions of Mackenzie, Sam, Lizzy and others as Zack starts tripping badly – to what the guy believes is happening. But here we’re firmly inside Zack’s head and all we see is what he sees. Or at least, thinks he’s seeing.

Writer-director Richard Anthony Dunford does a fine job of racking up the horrors, hinting at the reality behind them without ever departing from his central idea. Things take a turn for the worse after Lizzy gets Zack into bed, and then things just get more and more awful. Earlier in the film one of Zack’s mates showed him an automatic pistol in a box in an upstairs room, a foreshadowing so obvious that the box may as well have had ‘Property of A Chekhov’ written on the side. Once Zack has located this, the film becomes unavoidably influenced by first-person shoot’em-up games as he prowls through the corridors and hallways, scary folk jumping out in his path. 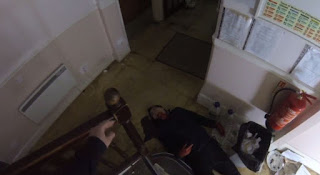 Essentially, the party-goers now fall into three camps. Some are scary demons, some are corpses (presumably victims of the demons) and those in the dance room are now in evening dress, swaying gently to old-fashioned music while blood drips from their empty eye sockets.

The third act takes us out of the house and into a series of skilfully edited scenes, including some flashbacks or fantasy sequences as Zack’s mind becomes increasingly fractured. It all leads up to a thoroughly satisfying conclusion and a final shock which completely justifies most of what has gone before.

As you can probably tell, the second half of the film is a lot more watchable than the first. All that happens up to the mid-point is that we meet (mostly very briefly) a large number of very similar young people – plus we hear the story of the building’s creepy past. All this could be justified as establishing character except that, as noted, only Sam, Lizzy, Mackenzie and Tash (and Zak of course) have any real depth to their character. P.O.V. runs 85 minutes and it could easily lose 10-15 minutes from the pre-visions part of the story, so that the nightmare kicks in at the end of act one rather than halfway through act two. 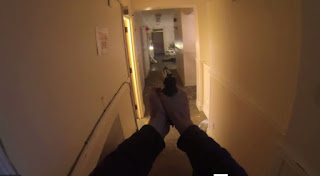 But that’s where Dunford has hobbled himself. The use of long, unedited takes, based around obviously very, very carefully managed direction of the actors, means that there’s nowhere he can make the required snips to get that part of the story down to a workable brevity. All that can be done is for reviewers like Yours Truly to assure potential watchers that yes, it is worth sitting through all this frankly rather dull scene setting to get to the good stuff.

Jess Heath deigned the gruesome make-up; her previous gigs include Stag Night of the Dead, Colin, Dark Rage and It Never Sleeps. Kate Freeth was the production designer, an absolutely crucial role on a roving camera picture like this, and Lily Knight (It Never Sleeps) designed the costumes.

This is Richard Anthony Dunford’s feature debut following a number of shorts, some of which were horror. He also has a few non-directorial credits including writer on short child abuse drama I Believe in Monsters and editor on the as-yet-unreleased Eve’s Demons. Dunford previously explored the possibilities of the found footage subgenre with Nick and Tara’s Sex Tape, a four minute short (available on Vimeo) starring Tom Clear and with make-up by Mike Peel. 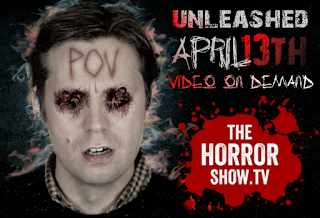 And that’s the final point to make, I think. P.O.V. isn’t ‘found footage’. One of the biggest problems with that subgenre is the arbitrary ‘we must film everything’ requirement: the determination of people to hold onto their camera at all times. P.O.V. dispenses with that constraint and thus has a degree of freedom – and creativity – not normally associated with films of this type.

Shot in 2014, P.O.V. had a cast and crew screening in London in August of that year followed by festival screenings in December in Merseyside and Manilla (on Christmas Day!). Its first actual release was a VOD outing courtesy of the good folks at TheHorrorShow.tv in April 2015.