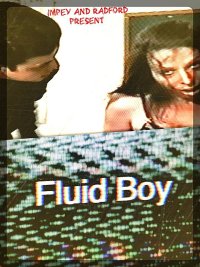 Even by Jason Impey’s standards, Fluid Boy is a nasty piece of work: a brutal, unpleasant, unbelievably misogynist film which is as simple and stark as it is violent and revolting. But… it’s not gratuitous. It raises questions. It makes a point. It’s well-made. It’s worth watching. It bolsters Impey’s position as an important name in the British Horror Revival.

The story here is very, very simple. Impey plays indie film-maker Joe Newton who has hired a hall to audition an actress for a role in his planned zombie film The Orgasmic Dead. With him is Maximilian, the film’s leading actor and co-producer. Joe hates Max – and with justification. While Joe is trying to be professional, Max is just an arsehole, utterly disinterested in the audition process and given to manic, high-pitched laughter at things that aren’t funny. Max is played by regular Impey collaborator Wade Radford under the nom-de-screen ‘Dylan Jake-Price’ for some reason. The aspiring actress, Julie, is played by Samantha Keller who also worked with Jason in his segment of the Grindsploitation anthology.

Julie gamely tries to audition, confused by the relationship between Joe and Max, but eventually decides to leave, freaked out by the whole thing. At which point Max knocks her senseless, ties her up, and spends the rest of this 62-minute film abusing and humiliating her in increasingly unpleasant ways while Joe films everything with the view to distributing the footage as a snuff movie. 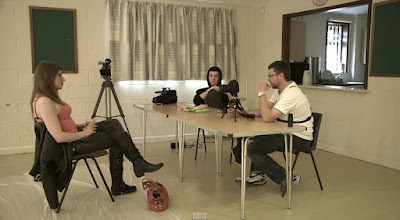 The reason why Fluid Boy is somehow watchable - even for a guy like me who really, really wants to just see a nice, cuddly monster rip somebody’s head off – is because of the relationship between Max and Joe. Max is a nutter, and quite possible coked up. Constantly prowling around, never still for more than a few seconds, grinning and giggling, he has ‘sociopath’ written through him like a stick of rock.

Joe on the other hand takes no part in the abuse and humiliation at all, simply recording it with a handheld video camera, a Go-Pro on his chest and assorted static cameras around the room, which is empty except for a table and a couple of chairs. A door leads through to toilets and a shower. And, in a piece of chilling mise-en-scene, a serving hatch through to a kitchen remains open, the occasional background glimpses of prosaic domesticity serving to underline the unreality of the violence and abuse meted out to the increasingly cowed Julie. 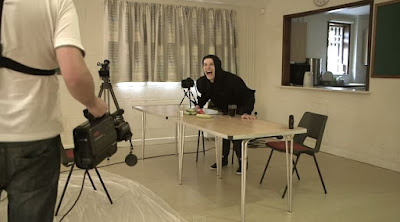 Joe argues frequently with Max, but his complaints are about mishandling of expensive equipment, the failure of the promised ’snuff’ film to deliver the goods, or just his colleague’s unprofessional, infantile behaviour. Joe makes no effort to help or save Julie or alleviate her suffering in any way, even during the times when Max is out of the room. “It’s not up to me,” he tells her, gnomically.

A film that was just about Max hurting Julie would be not just unpleasant and misogynist but boring as well. It’s the inclusion of Joe, the third wheel, that raises Fluid Boy above thematically comparable pictures.

Here’s what I assume is happening. The way I read this, there are only two people in this room. Max is a projection of Joe. In Freudian terms, Max is Joe’s id, unfettered by any sort of super-ego, while Joe’s fucked-up ego stays behind the camera. Jekyll and Hyde basically, but existing simultaneously. Fight Club without the Hollywood gloss. The opening scene is Joe in his car, tmetically swearing like a trooper to himself about how much he hates Maxi-fucking-milian, which only bolsters my theory that the two personalities inhabit the same head. Once I realised this, my opinion of the film dropped slightly in expectation of a cheesy ‘twist’ ending that I could see coming a mile off.  (And can I just add that, as a writer, the fact that watching and reviewing Fluid Boy has given me the chance to use the adverbs ‘gnomically’ and ‘tmetically’ – ie. pertaining to tmesis – is justification enough for the time that I spent viewing the film and the time it has taken me to write all this. Anyway…)

Here’s what’s interesting. Jason never gives us that twist. The film just ends as the violence reaches a climax, with a brief single credit screen naming the three people involved. And that absence of a cheesy twist actually lifts the film back up in my judgement. It doesn’t detract from the Fight Club explanation of what is going on: who these two men are and why each is behaving the way he is. But it also raises the alternative prospect that everything we see, within the reality of the film, is ‘real’ and not some psychological projection. That Joe and Max are both sick in their own way, rather than Joe being sick enough for both of them. 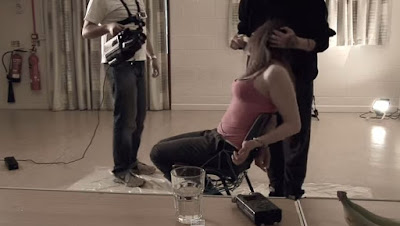 That’s what I mean about how this film, precisely because it’s a Jason Impey joint, raises questions and provokes thoughts. If there wasn’t space for the psychological interpretation this would just be lowest-common-denominator torture porn and I would have switched off after ten minutes and you would be reading my review of something fun with zombies in it. I honestly don’t know whether Jason and Wade made this with the Fight Club scenario in mind or whether that explanation is an accidental result of my take on their take on something intended as just misogyny for misogyny’s sake. I’d very much like to think the former. But ultimately it doesn’t matter. Jason Impey is a natural film-maker (albeit one who chooses to pursue a transgressive oeuvre below the radar of all but the most committed ‘cult’ fans) and as such he can’t help but make films that are interesting, in the same way that a natural artist doodling on a notepad can’t help but create interesting drawings, or a natural musician can’t help but whistle interesting tunes in the shower.

In film-making terms, the skill here is in Jason’s editing of the multiple cameras to create a smoothly flowing narrative. The picture unfolds in almost real time (there’s a brief jump at about 32 minutes and another at about 51 minutes) but it clearly wasn’t shot in 62 minutes.  Fluid Boy draws us in through established cinematic conventions – the wide-shot, the close-up – without the film-makers relying on cinematic set-up of shots and angles, but rather through the selection of shots and angles in post-production.  This is Jason Impey’s 428th film (or seems like it) and his experience shows. 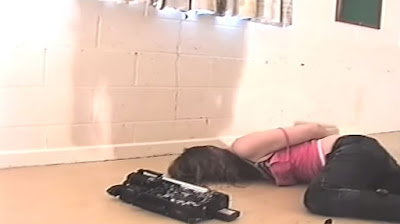 Radford has acted for Impey in films like Sex, Lies and Depravity (which he wrote) and Lustful Desires and the two have collaborated on stuff like Twink and the Boys Behind Bars trilogy; films which, with all due respect to Jason and Wade, you’re never going to see reviewed on this site. He’s chillingly good as the unfettered id: violent, sexual and scatological (seriously: this is a film for those of you who thought The Human Centipede was a little reserved and tame). Impey, playing yet another variant of his much-used indie film-maker character, provides the vital pedestrian counterpoint to Max’s manic antics. Joe is mostly behind the camera, or cut off at the neck, or hidden behind Max. When we do see him, he’s hunkered over an eye-piece so that we almost never view Jason/Joe’s face, while Max/Wade has more than his share of close-ups.

But the bravura performance here is Samantha Keller. It’s incredibly brave of an actress to film something like this, skirting so close to reality. Clearly she’s not really struck in the face, not really tied up and that’s melted chocolate not faeces, but nevertheless it’s a strong-minded, strong-willed (strong-stomached) woman who can handle something like this. Playing a believable victim in any violent film is always a challenge and Keller turns in a hugely impressive performance. Although how much of this extremely NSFW film she could include in her acting reel is a tricky question…

Bizarrely, the IMDB lists Radford and Keller as the same characters in a forthcoming feature called Allusion, directed by somone named Tony Newton who would appear to be a real person and not just another Impey pseudonym. Whether that is a remake of this film, or reuse of this footage, or something else entirely, is a revelation we will find out in due course. Or not, as the situation may be. 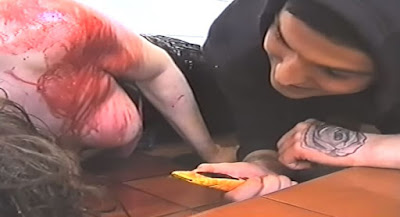 Fluid Boy is one of Jason Impey’s best works (of the comparatively few I’ve watched) and Impey fans (they do exist, I’m sure) will have no hesitation in watching it when the film appears on DVD. Should other people give it a try? Only if they know what they’re letting themselves in for. I have done my best to describe and analyse the movie. Like most of Jason’s work it’s most definitely not for everyone. But if you have an interest in transgressive cinema, and in particular in zero-budget films that push the envelope, then this will be worth your time.