Rise of the Zombie 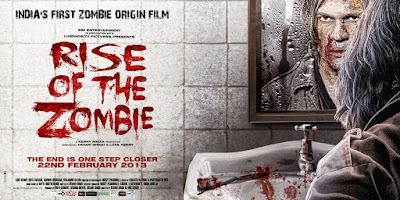 Indian films sometimes copy the plots of western films. I’m not talking about shameless, copyright-busting cheapo clones like the old Turkish stuff. Just a tendency for Bollywood producers to use the plots of successful American (and sometimes European) films with an Indian setting and an Indian spin. There are Indian versions of When Harry Met Sally and My Best Friend’s Wedding and Hitch and Clueless. 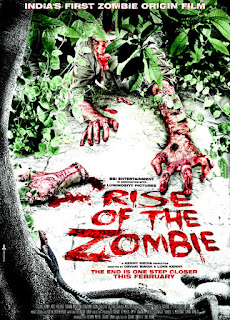 The thing is: the source material for these films is usually well-known, successful movies – not obscure little British indies. Yet here we have Rise of the Zombie – an unofficial, unacknowledged Indian remake of Andrew Parkinson’s 1998 indie feature I, Zombie: The Chronicles of Pain!

Luke Kenny (Indian born to Irish and Italian parents) stars as wildlife photographer Neil Parker who splits up with his girlfriend Vinny (Kirti Kulhari: Shaitan, Jal) and seeks solace in a trek into the woods. He hires a tent and has a local man bring him hot food every day. He cycles around the mountains and sometimes goes down into a local town for provisions.

Things start to go wrong when he is bitten by a strange bug. The bite on his arm spreads, the flesh rotting away, and his body starts to reject cooked food. Instead he takes to eating bugs, and then lizards and birds, ripping the raw meat from the bones. Unkempt and bloodied, he staggers around the woods, increasingly unaware of what is going on. Eventually he starts attacking people that he meets, ripping into them and eating their flesh. Meanwhile Vinny is worried about Neil and teams up with his best friend Anish (Ashwin Mushran, who was in supernatural comedy Hum Tum Aur Ghost) to try and find what has happened to him. Benjamin Gilani (Alaap, Mirch Masala) plays Neil’s father, a hospital consultant with the very un-Indian name of Dave Parker.

There are a lot of differences from I, Zombie, obviously. A bug bite rather than a crazy lady. The couple split up before he disappears. He’s a wildlife photographer rather than a biology student. The setting is rural rather than urban. And he doesn’t kill himself at the end with chloroform. (Nor does he have a wank over a photo of the girlfriend he can never see again.) 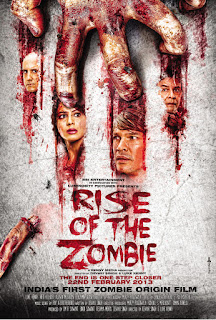 But… I could come up with a similar list of differences between The Others and Anjaane. So what? The derivation is obvious. The basic story here is clearly modelled on I, Zombie. A young man, isolated from his previous life, becoming more and more ill from an infectious bite which rots his flesh and gives him a desperate hunger for human flesh - cannibalistic necrosis – while his family and friends are concerned about, and mystified by, his disappearance. Andy Parkinson’s film is completely distinct and utterly unlike any other zombie picture (even Colin, which shares the basic concept of a zombie as the central character but is otherwise utterly dissimilar). Somehow Luke Kenny - or more likely, writer/co-director Devaki Singh - has seen a copy of Parkinson’s film, or maybe just read a review of it, and decided to make an Indian version.

I’m not criticising. Unofficial remakes happen. Julian Richards took the basic concept of The Wicker Man and turned it into Darklands. Jason Impey took Andreas Schnaas’ Violent Shit and turned it into Sick Bastard. Even if this was a clone, there are enough differences to make it worthwhile: not just the geographical switch but the passage of 20 years (no digital cameras or Blackberries in the 1990s). I bet the budget for Rise of the Zombie was not dissimilar to what Andy P spent on I, Zombie but that much money buys you a lot more nowadays – in India or England – in terms of technology. No grainy 16mm here; just crisp, clean digital video.

Ritu Jhanjani has the main make-up credit and was cited in publicity as responsible for the zombie make-up, although Saved Ismaile gets the actual credit for ‘prosthetic make-up’. Whoever did it, I’d be lying if I said it was particularly good. Pranab Lahkar is credited as ‘Creative VFX Supervisor’; his previous credits include Dhoom-2, Rocket Singh and even 28 Weeks Later.

Luke Kenny, who considers himself thoroughly Indian despite his parentage, came to prominence in the 1990s as a VJ on a video music channel. He now fronts a rock band (called Luke Kenny LIVE) and DJs as well as making films. Since Rise of the Zombie he has shot a short film called Stephen King, I am Your Biggest Fan. Devaki Singh, who was described in publicity as the first woman to direct a zombie film (hmm, possibly...) is an artist whose first exhibition was in 2009.

In 2013 three films vied to be ‘India’s first zombie film’: Kenny and Singh’s angst-ridden drama; Goa Goa Gone (a fun action-horror-comedy which screened in Leicester last year); and Rock the Shaadi, a rom-zom-com set at a Punjabi-zombie wedding(!). Kenny’s film was originally going to just be called Zombie but the makers of Rock the Shaadi had registered that title so he went for Rise… instead and somehow avoided confusion with the contemporary Danny Trejo picture Rise of the Zombies. Ironically, Rock the Shaadi hit problems during post-production and looks unlikely to ever be finished. 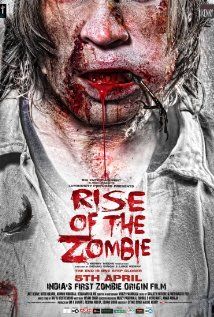 Rise of the Zombie was originally announced for release to cinemas on 22nd February 2013, a date which appeared on a number of posters including one that was produced for PETA promoting vegetarianism. Despite having a clear opportunity to steal a march over Goa Goa Gone, Rise… was bumped to 5 April meaning that both films were released on the same day. So theoretically either can claim to be the country’s first zombie picture. What is more Murzy Pagdiwala, who was DP and executive producer on this film, also DP-ed the second unit on Goa Goa Gone!

V One Entertainment picked up the film for international distribution and there is an English-subtitled version on Amazon Prime. The version I watched was on the VOneEnt channel of DailyMotion which is free but has adverts every few minutes. That wasn't subtitled but there's really very little dialogue in the film and half of that is in English anyway.

The end of Rise of the Zombie promises a sequel in 2014, Land of the Zombie, and includes shots of numerous zombies shuffling around, implying that the virus has spread beyond its initial host. Kenny had plans for a trilogy but Land… has not yet appeared.

Truth be told, Rise of the Zombie isn’t a bad movie. Kenny gives a spirited performance and Pagdiwala’s camera-work captures both urban and rural locations well. The film runs 86 minutes and has a few songs on the soundtrack (but no dance numbers). What’s missing is the bleak nihilism of the original, and there’s not really anything to replace it. Instead of cutaway talking heads of the people he left behind, the film simply lurches into Vinny and Anish’s story in the third act, which goes nowhere. Instead of social comment or character development, we’re treated to lots of fast-edited flashbacks and dream sequences which look flashy but don’t give the movie any substance. 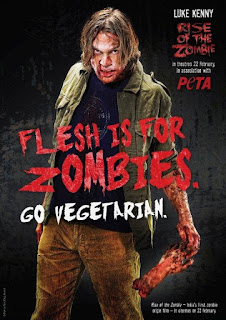 Nevertheless, one must grudgingly admire Kenny for taking such a non-commercial tack on his zombie film. It would have been easy to just go for a standard zombie siege and throw in a few culturally specific gags. The story of one man’s lonely descent into a zombie state was radical when Andrew Parkinson made it nearly 20 years ago and it’s still pretty radical now.

In March 2013, when promoting the film, Luke Kenny was interviewed by Bollywood Life. This is what he told them: “If we were telling a zombie survival story, there are 40 years of zombie survival films to see who did what, and what we could try to do differently. ... In this case, there was no precedent; there has been no zombie origin film ever been made. There is no story that has ever been written that tells you the story of this one human being and what happens.” Now, that’s not strictly true, is it?

[Update. Devaki Singh may be the first woman to direct a zombie feature, but Isabelle Defaut directed The Long Night, the 2002 short which inspired Devil's Playground. - MJS]
[Update 2: I just realised that Kerry Anne Mullaney directed The Dead Outside in March 2008. So Devaki Singh's claim falls to piece. - MJS[
Posted by MJ Simpson at 22:55