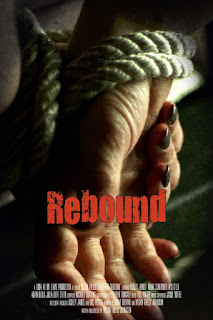 This horror-thriller has its pros and cons but the balance sheet leans towards the former so I’m going to recommend it to you, albeit with caveats.

Ashley James (also an executive producer) turns in an absolutely cracking central performance as Claire, who is leaving LA after becoming disillusioned with (a) her inability to make it as an actress, but mostly (b) her cheating arsehole of a boyfriend. The credits play under footage of her discovery of Eric (co-producer Brett Johnston) doing the nasty with a never-named hussy. (Ali Williams is the Other Woman. Though it’s just a brief, wordless, flashback role she absolutely nails it, revelling in her adulterous victory and looking almost demonic in some shots. Of course, this is Claire’s memory of the moment so it’s an exaggeration.)

So anyway, Claire packs up her belongings, says goodbye to her friend (Julia Beth Stern: Killer Holiday) and sets off home to her parents’ house in Chicago.

Though it plays out as very much prosaic reality, the premise of Rebound is distinctively American and to a British viewer (or reviewer) it’s an alien world that’s mysterious and unknown from the off. Chicago, we are told, is three days’ drive away. That’s just unfathomable, living in a country where no journey takes more than a couple of days max. If you lived near Land’s End and wanted to visit your friend in John O’Groats, you could get there by road in under 16 hours. But like the saying goes: Americans think 100 years is a long time and the British think 100 miles is a long way. The USA is a nation built on two inventions: cars and guns. Both feature in this film.

So I’m thinking: if you want to get from LA to Chicago, why would you not just go by air? But I’m not American. To Claire, a three-day drive along the interstate is just a normal thing to do. On the first day, she manages to lose her cellphone at a rest stop. Then, after dark, her car breaks down. That’s okay. There’s an old screenwriting maxim: it’s fine for a coincidence to get your character into trouble, it’s not acceptable for a coincidence to get them out.

Passing motorist Gus (Wes O’Lee, who also contributed some of the songs on the soundtrack) gives Claire a ride into the nearest town: never-named, but it’s the sort of place where there’s one motel and one car mechanic. That mechanic is Eddie (Mark Schelbmeir), who collects Claire’s car but tells her she’ll have to stay overnight as he needs to get a part.

Balking at the unexpected cost, Claire pleads with Eddie to knock a few bucks off, which could be considered sweet-talking, which could be significant. Claire then goes to the town’s only bar where, among creepy you-ain’t-from-round-here locals, she unwisely knocks back a couple of stiff ones, while chatting with Eddie.

…And at the halfway point in the movie, she wakes up tied to a chair.

It has to be said that Claire’s behaviour is not terribly sensible. Since she doesn’t want to interact with anyone in this nowheresville place, why does she go to the bar? If you just want to get drunk after the day from hell, why not buy a bottle of wine from the 7-11 and then drink it while watching cable in your motel room? That’s what I’d do.

What really concerns me is that this ‘middle act’ doesn’t really develop anything. I can see what writer-director Megan Freels Johnston is trying to do (at least in retrospect, having seen the whole movie) but the little hints of subtext are lost beneath a sequence of “Oh God, no!” sadistically abusive actions. In the final 20 minutes or so, matters do start to develop and the film raises some interesting ideas, but too little too late. And while the very final scene is bound to prompt debate among viewers, I personally didn’t find it very satisfying.

There’s a lot to like in Rebound. Strong performances from the cast, very effective music from Michael Boateng (helped by fine sound-mixing by Clint Allday) and some absolutely terrific cinematography from Stephen Tringali. Johnston directs with an assured hand and ensures that the whole film is driven by characters. Except that, well, there’s not really much character to Eddie. There’s a brief mention of an abusive father, and a reference to previous victims, but really he’s an off-the-shelf cinematic psycho who just wants to hurt pretty women. Which isn’t very interesting. 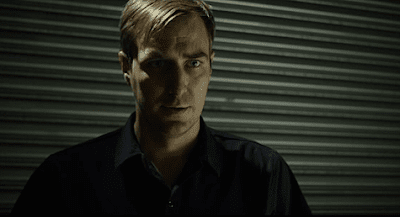 There is a sort of feminist subtext underlying all this, an area I'm going to leave to theorists with too much time on their hands. I'll just note that, although Claire becomes stronger through her experience, it takes the intervention of a man to help her achieve that - and violent, abusive intervention at that. There's a thesis ti be written here.

Structurally, this falls into a trap that I’ve seen many times before, of putting the big turn-around at the midway point, which means that the film is unbalanced. Act 1 takes up half the running time, leaving Acts 2 and 3 not enough space to develop and fully explore the situation which Act 1 has created. While the combination of direction and acting ensures that the first half of the film doesn’t drag, the fact remains that really Claire should be in that chair after 30 minutes, not 47, so that we can spend another 25-30 minutes witnessing her terrible situation - ideally with a series of twists and turns that keep us glued to our seats - then a final half-hour of false hope and things getting even worse before eventual redemption (or not, as the case may be).

I wish Megan Freels Johnston had spent more time – more pages – exploring the very good premise that underpins this story, and less time building up to it before a metaphorical swift jog through what the film is actually about. Which is, I guess, male dominance and female empowerment. Or something. 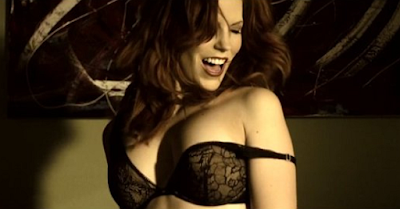 But look, this is me being picky. If you want a finely crafted horror-thriller about a lone woman in a strange town full of sinister-seeming locals, Rebound is a good choice. It's a solid directorial debut by Johnstion who has been producing since 2009. Her first film was Sparks, a half-hour short starring Carla Gugino and Eric Stoltz, directed by Joseph Gordon-Levitt. That was based on a story by Elmore Leonard, who was Freels' grandfather - which must have made for some interesting bedtime stories...

The cast also includes Liz Bauer (who was in Jeff Brookshire’s Awaken the Dead) as a homeless woman and Kevin Bulla (Joyful Noise) as a disconcerting barman. Joanne Adolfo provided the (limited) effects make-up.