The secret lies in the characters. Normally the young people in these films are just awful. Self-entitled millennials or sweary, lary chavs. In far too many films the viewer can identify with no-one on screen and basically wants them all to die as soon (and as painfully) as possible.

The six main characters in Weaverfish are all believable and mostly sympathetic. Reece (Shane O’Meara: Waterloo Road) is a sensitive, introspective guy with a camera around his neck. He takes a bit of persuading to let his hair down and party, but he’s up for a drink when offered so he’s not some stick-up-the-arse buzzkill. Matt (Josh Ockenden: The Underwater Realm, Arthur and Merlin) was his best mate at school although they’re not quite as close now. Matt can be a bit of a prick but he’s not a bad lad. He is dating the very cute Charlotte (Lucy-Jane Quinlan: The Cutting Room) for whom Reece has long carried a torch. Quinlan gives a particularly fine performance, balancing Charlotte on a fine line between vulnerability and resilience. 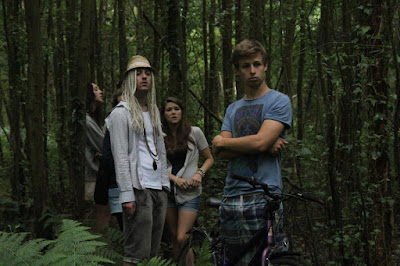 Abi (Jessie Morrell) is Charlotte’s blousy pal. Shannon (Ripeka Templeton) is Reece’s younger sister who is more keen on partying than her brother. Rounding up the sextet is Mike (John Doughty: The Hounds) a slightly older guy with white dreadlocks who is in a band. He could potentially be an arsehole but actually comes across, once we get to know him, like the others, as a rounded, believable, sympathetic character. All of these are people you could quite happily spend some time with. None of them ever do anything inexcusably dumb.

Do you see, other film-makers? It is possible.

The set-up is that there is an area of water, Fountainhead Creek, which has been sealed off both landwards and riverwards since a small child went missing there several years earlier. There is a disused oil refinery behind the fence. Mike and his bandmate Chris (Dusty Rhodes) – who is either bi or just uses that as a way of getting laid – have discovered a gap in the fence across the mouth of the creek through which they squeeze a small inflatable, twice. As well as those mentioned, there are four or five other teenagers, plus plenty of booze, a few pills, some tents and some music equipment.

Among a litany of strong points, Weaverfish’s big weakness is that we spend a long, long time getting to know the characters. They are well-defined, both in themselves and their relationships, but we signed up for a horror movie not a teen drama. The 95-minute film is nearly halfway through before anything unnerving happens, by which time it’s the morning after the night before and people are waking up. There’s a great deal of puking, but that can be put down to last night’s pills and Pilsner – or can it? When half the group disappear along with the boat, presumably ferried back to the town by Chris, the poorly state of Abi and Shannon persuades the remaining six to set off across land, hoping to find a stretch of fence with a road alongside which might allow them to contact someone who can alert the police and call an ambulance. (There is the traditional, brief hold-up-the-phone-got-no-signal scene.)

As it happens, these six are the most clearly developed characters from the original dozen but we didn’t know that until now so we’ve been trying to become familiar with more characters than we needed to. A shorter first act, with fewer secondary characters, would definitely have benefitted the film. It’s good that we have got to know these characters so well and can fully sympathise and empathise with them. It’s good that we can see the Matt/Charlotte relationship coming apart as he surreptitiously targets Shannon, and that we can see that Charlotte really should be with Reese (plus we can see a relationship developing between Abi and Mike). But Act One could have been tightened up without losing that, I think.

So, the problem they face is that Shannon and Abi, as well as feeling sick, have each developed a large patch of distorted skin on their torsos. An attempt to clean this results in a quite startling and disturbing effects shot which is really where the horror kicks in. Once Mike and Matt also admit to having this symptom, it becomes clear that it has been caused by yesterday afternoon’s dip in the creek, which Reece and Charlotte both passed up. Something from that old oil refinery is still floating about in the water, and it’s not good. (Someone comments that they’ve seen no fish. There is also a complete absence of ducks, swans, gulls, herons or any other sort of aquatic wildlife.) 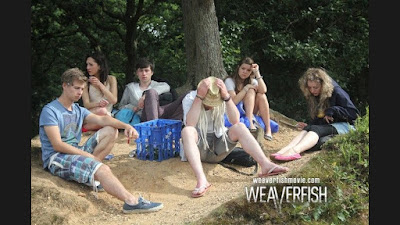 Comparatively little actually happens in the second act, apart from the group moving forward and people feeling worse, so it is tremendously to the credit of film-makers Harrison Wall and Mark Matlby – and their talented cast – that we remain gripped as the film inches inexorably into horror territory before finally tipping over into a full-on sci-fi conspiracy thriller in the short third act. Commendably, the film ends at exactly the right point, a denouement which is both enjoyably bleak and satisfyingly vague. The (partial) revelation of what is going on is utterly startling, but in a jaw-dropping way, not a jump-out-of-your-seat way.

That’s actually another feather in the film’s cap; it never goes for a cat-scare or other cheap horror gags. Everything here is characterisation and narrative.

Wall and Maltby came out of university and went into TV post-production where they saved their salaries in order to fund this £10,000 production. Wall has done editorial gigs on the likes of Dickensian, Humans and Poirot, while Maltby has worked on The Fades, South Riding and Whitechapel. Wall previously directed two shorts on which Maltby provided special effects: sci-fi musical CyberBeat and a horror called The Snatching which has some similarities to Weaverfish. More recently, Maltby has worked as a colourist on features including Blood Moon, Howl and The Haunting of Radcliffe House. Their script was based on an idea (initially much more of an action/sci-fi story) by their friend Thomas Shawcroft who was DP on Weaverfish and whose various camera operator gigs have included Community, Doctor Who and Galavant (meaning he could potentially have worked with Weird Al!). 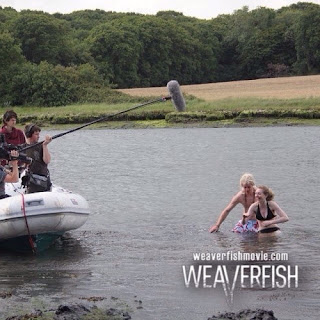 Shot near Southampton over 15 days in June 2011, the film premiered at the Bootleg Film Festival in Toronto in May 2012 where it picked up the Audience Award and Quinlan won Best Actor (Female). That version ran 100 minutes and although five of those have subsequently been cut, it could stand to lose another ten or so from that first act. There was a private UK screening for cast and crew the following month at the Prince Charles Cinema and the film also screened in Luxembourg in September that year as part of a 'British and Irish' season. Weaverfish was released in this country through Vimeo on Demand in October 2013 while Continuum Motion Pictures (whose other UK titles include Any Minute Now, Survivors and Bikini Girls vs Dinosaurs) handled the American VOD release in September 2014.

I was really genuinely impressed by Weaverfish. It’s not perfect but as a first feature from two young film-makers shot for tuppence ha’penny it’s a very fine piece of work indeed and a step above many comparable indie horrors. It has good casting and acting, good direction, good production values, good technical values and above all a fine script that prioritises characterisation over cheap exploitation. Well done, all involved. I hope this gets a proper DVD release so more people can discover it.