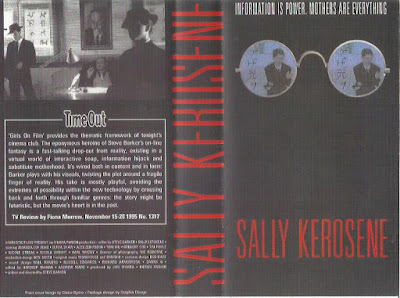 Sally Kerosene is one of a number of 20-year-old VHS tapes I recently came across and watched. The principal interest in this one being that it is an early work by Steve Barker, creator of the Outpost trilogy.

This near-future, film noir cyberthriller is about half an hour long and stars Amanda Loy-Ellis (subsequently in episodes of Cracker, Peak Practice etc) in the title role. Produced just three years or so after the web was invented, just as ‘the internet’ was becoming a thing, there is a charmingly retro feel to the film as Sally and her partner Max (Tim Poole, also in Stephen Gallagher-scripted mini-series Oktober) explore the net using VR goggles and gloves, which was kind of how we all hoped it might be.

Underneath Sally’s sprightly, cynical narration we’re told about how she and Max worked for crime boss Parry (Gregory Cox – later in X-Men: First Class!) but came a cropper when the online information they were stealing was also stolen by someone else. Sally is betrayed by Max and ends up being driven around by a couple of hitmen (Alex Zed Fodor and the always watchable Tom Wu – Ra.One, Mutant Chronicles – who around this time was doing bit parts in episodes of Cracker and Thief Takers).

Interspersed with this are scenes of Sally talking with her mother (Olivia Shaw) who would very much like her daughter to settle down, dress a bit more feminine and give some idea of what she does for a living. These scenes are in colour while the main story is in black and white, plus there is a fun spoof cop show in distorted hypercolour which Sally watches on her ‘interactive TV’. Nic Osborne was the DP and some fine work indeed is on show here. The whole thing is neatly snipped together thanks to the adroit editing of Hardeep Takhar and Andrew Ward (who later worked on Wallace and Gromit!).

Sally Kerosene is a crisp, smart 30-minute short of the sort that they don’t make them like any more. Made back in the days when there was almost no way for something like this to be seen (except at festivals), this is a calling card as much as anything. But it’s also a neat little film, a half-hour story told over half an hour, reliant on its script, acting, direction, photography and design rather than flashy gimmicks. That said, Sally is a fun character in a fun world and there’s no reason she couldn’t have returned in a feature.

This was Steve Barker’s graduation film, produced at the Surrey Institute of Art and Design. It played some festivals and won a few awards, including Best Short at Houston, but its biggest exposure was on TV. Back when there were only four channels and the fourth one was actually good, there was a C4 series called Shooting Gallery which each week collected together two or three impressive short films. This slot actually ran for several years and a few episodes are available on All4 – but not the November 1995 episode ‘Images of Femininity’ which included Sally Kerosene.

It’s clear from comments that lie scattered on various forums and blogs that Steve Barker’s film made a strong impression on those who saw it (and understandably so). For example, I found a 2009 blog post by Chris Regan, director of Jenny Ringo and the Monkey’s Paw, in which he describes Sally Kerosene as, in his opinion, “the greatest short film ever made…Essentially, it's a British cyberpunk thriller that manages to be huge in scale and scope whilst never over-reaching it's meagre budget. And the title character is super cool.”

Sally Kerosene was Steve Barker’s entry into the film industry, helping him to get his foot in some doors and establish a name for himself. After a number of writing gigs including crime thriller Plato’s Breaking Point and true-life crime caper The Great Dome Robbery, Steve made his mark with 2008’s Outpost and its 2012 sequel (for the third film he handed the directorial reins to Sally/Outpost producer Kieran Parker). More recently he shot second unit for Paul Hyett on Howl and now his latest feature The Rezort (aka Generation Z) is lined up to screen at Frightfest next week (it has already played Edinburgh and had a limited theatrical release in Spain).

For some reason, Sally Kerosene has never appeared online. In fact there's almost no record of it outside of a BFI page. It's not on the IMDB and there isn't a single image anywhere on the net (apart from the VHS sleeve I've just scanned). I know a lot of people would like to see it so maybe once Steve has finished promoting The Rezort he could dig out a copy. Until then, my VHS tape and a few off-air copies held by Chris Regan and others are the only evidence of this corking sci-fi romp.