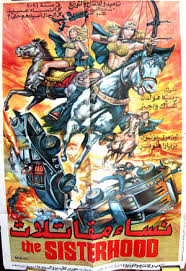 Cirio H Santiago - your mark of quality when it comes to Filipino movies. And I’m not being cynical - the production values here are a whole notch above many of the man’s contemporaries.

This is yet another post-holocaust adventure that would like to be Mad Max 2 but isn’t, but it does at least have an original premise. The world (well, North America) has reverted to an entirely patriarchal society and women are subjugated - except for a semi-legendary band of femme outlaws called ‘the Sisterhood’ who are said to be witches. In fact, they have various powers derived from the mutational after-effects of the bomb, which manifest themselves at puberty. Or something.

We meet two of these, Alee (Rebecca Holden: Knight Rider, Lycanthrope) and Vera (Barbara Hooper: The Wizard of Speed and Time) as they run up against the gang of thugs led by bearded Mikal (Automan himself, Chuck Wagner). One of the girls has healing powers and one has telekinetic ability, but to be honest I can’t remember which is which. Anyway, they kick Mikal’s arse and send him and his gang on their way in their crudely customised motor vehicles. 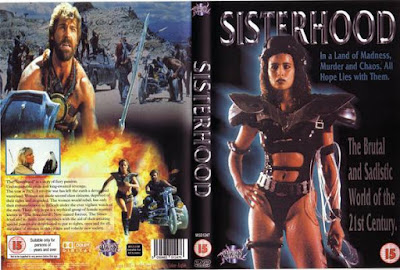 In a nearby settlement lives 18-year-old Marya (Lynn-Holly Johnson: Mutant 2, Hyper Space) and her younger brother Gil (Tom McNeeley). Marya has some form of psychic link with her hawk Lady Shri, which her master, Lord Newfield, accepts because it’s useful. But the lord is away and others in the settlement are calling her a witch. Mikal and his engine-revving mates attack the settlement and, before she escapes, Marya sees her brother cut down by Mikal himself. (For some reason, although motor vehicles still exist in this world, no guns have survived so all fighting is done with swords and bows.)

When Marya seeks shelter at a tavern, she meets and befriends Alee and Vera, who are reluctant to accept her into the Sisterhood until they discover her affinity with Lady Shri. Camped for the night, Vera is snatched by Mikal and much of the rest of the movie is Alee and Marya trying to get her back. Mikal at first joins forces with fey, hare-lipped Lord Barak (Robert Dryer: Cyborg 2, Spaceship, Revenge of the Zombie) but that ends unhappily so he teams up instead with Lord Jak (Anthony East: Bloodfist II) to journey through the Forbidden Zone to Calcara, ‘the city of ultimate pleasure.’ 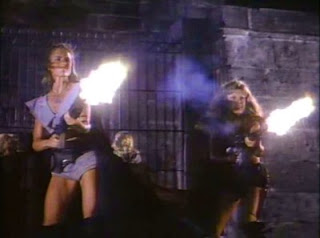 The Forbidden Zone, you will not be surprised to hear, is home to various unpleasant mutated folks who chase Alee and Marya into a cave network, wherein they find a whole bunch of pre-holocaust stuff - including loads and loads of rifles and some handy armoured personnel carriers which they are of course able to drive straight away. With this they head for Calcara, which is ruled by loud, jovial Lord Kragg (Kenneth Peerless: Bloodfist) but frankly for a city of ultimate pleasure it seems rather devoid of bars and whores.

Lord Kragg receives Mikal’s gift of a witch but, wouldn’t you know it, he’s already got some! A whole room full of captured Sisterhood members in manacles. When Marya and Alee break in and rescue Vera (and kill lots of guards) some sort of spectral goddess appears and all the manacles fall off the Sisterhood who magically fade away. Eh?

I’ve got a soft spot for this movie (which was just called Sisterhood for its UK DVD release, possibly to avoid confusion with the similarly titled David DeCoteau picture), mainly because it isn’t just a clone of Mad Max 2 or Escape from New York (1980s Italian producers, are you listening?). The cinematography by Ricardo Remias (She Devils in Chains, The Muthers, Vampire Hookers, Anak Ng Bulkan) is good and the fights and stunts are well-handled; Ronald Asinas (Terminal Virus), Day Guerrero (Robo Warriors) and Fred Esplana (Raw Target) are credited as stunt choreographers. 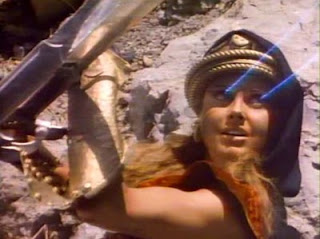 Sure, there are plenty of cliches and some silly bits but it’s more enjoyable than many other films in this genre. The mere fact that I’ve watched it twice is evidence of that. The acting is better than one would expect, and if Johnson is a little wooden occasionally she is also very good at playing up her character’s vulnerability. 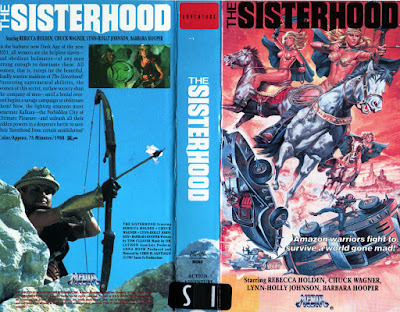 It’s a Cirio H Santiago movie and, let’s face it, the man’s a cinema legend, having helmed more than fifty films from Filipino Wonder Woman series entry Darna and the Tree Monster to one-boy-and-his-pterodactyl remake Anak Ng Bulkan/Vulcan, as well as producing such WIP classics as Jack Hill’s The Big Doll House and The Big Bird Cage. I’m not ashamed to say that I will always happily watch any movie with Santiago’s name in the credits.