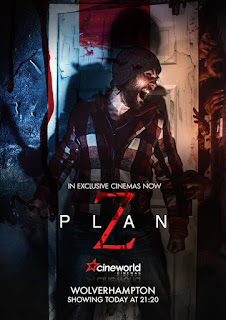 I believe that I have mentioned elsewhere my predilection for depressing zombie films. For anything in this subgenre that isn’t intended as a comedy (ie. a non-com-zom) I’m looking for something bleak, something soul-crushingly nihilistic, something offering no shred of hope for humanity. The sort of film that starts with the whole world going to shit and then shows how things just get progressively, laboriously, will-sappingly worse. The end.

Maybe it was something in my childhood. I dunno.

Stuart Brennan has been making feature films for ten years now, mostly as producer, often acting in them as well. These include The Feral Generation and The Reverend, plus he was an executive producer on The Zombie King. In the mid-noughties he directed an obscure ghost story called The Lost (which I dealt with in Urban Terrors: I can't honestly recommend it to you) and since then his only credit from the folding chair being an acclaimed boxing biopic, Risen. Now he’s finally back in that chair (well, doubt if he sat down much as he also plays the lead character here) for Plan Z, a powerfully bleak and immensely watchable zombie feature which received its European Premiere at the 10th Festival of Zombie Culture here in Leicester. 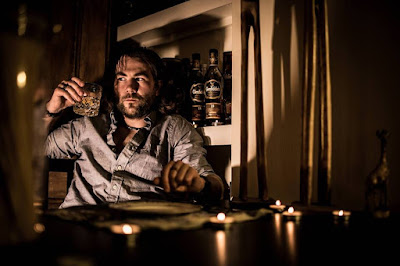 Brennan plays Craig, a freelance photographer who habitually prepares for the worst just in case. Receiving a tip-off from a Civil Service insider (Thomas Coombes: Scar Tissue) that a rapidly spreading infection is going to go big, Craig stocks up his flat with food, water, candles etc. And indeed, not long afterwards the world goes to hell in a handcart as everyone starts eating each other.

Much of the first act is a solo performance, with Brennan both on screen and narrating. Then comes a phone call from his old friend Bill (Mark Paul Wake: Masterpiece, also a producer) who has spent the last few days inside a restaurant toilet, a rather unexpected end to an otherwise pleasant dinner date with his girlfriend (Natalia Celino: Deranged, Umbrage: The First Vampire). (Coincidentally, this was followed at the Leicester event with the awesome Korean zombie action flick Train to Busan – which also features people hiding in toilets. Of course, the archetype of this sub-sub-genre is Stalled.) Craig makes it to the restaurant and gets Bill back to the flat, where they survive a little longer thanks to Craig’s plan.

Now that we have two people on screen, we can get some character conflict. Craig is absolutely pragmatic and rational to the point of heartlessness, because he believes it’s the only way to survive. Bill is more prone to emotion and sympathy. The contrast is particularly effective in a sequence which revolves around a young woman (Isabella Caley) trapped inside a parked car. 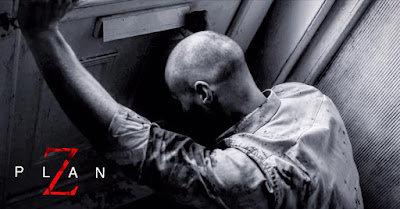 Craig’s long-term plan is to head for the Isle of Skye which he thinks should be remote enough that a stand can be made against the zombie apocalypse. (The Z-word does get a few outings here. Often zombie films avoid it, effectively setting themselves in a parallel universe where fictional zombies are not a thing. This is the first serious zombie film I’ve seen set in a world where people know and understand the zombie concept but it’s not a real thing – until it suddenly is.) So anyway Bill and Craig pack their supplies – Craig has a bag already because he has a plan – and evade the local zombies well enough to make it to a car and head out.

On the way to Skye (which is connected to the mainland by a road bridge, in case you were wondering) they pick up a companion, an Irish guy named Ronan (executive producer Eugene Horan: Ghostwood). By the time they reach the island, Ronan is no longer with them but there are two women in the back seat, Seren (Victoria Morrison) and Kate (Brooke Burfitt: After Death, The Addicted). Where some films would have concentrated on the potential romantic/sexual angle, Brennan ignores that in favour of exploring how these characters cope with the world around them and the future they face, rather than soap opera relationships.

There’s not a huge amount of plot to Plan Z, which is fine because this sort of depressing lament for humanity works best as a slow burn. What separates this film from so many others is that the main character does have a plan of what to do, he’s not just winging it. Brennan’s acting style tends towards the stiffly understated rather than wildly dramatic, consequently the character of Craig suits him (or, if you like, he suits the character) better than his role as a vigilante vampire vicar in The Reverend. Craig just gets on with stuff. There’s a particularly heart-wrenching bit of dialogue in which he dispassionately describes to Bill how he saw a four-year-old boy ripped part. It will grab your stomach in a way that seeing someone ripped apart will never do, no matter how good the effects.

Speaking of ripping people apart, there really aren’t a huge amount of zombies in this film. There are some scenes of zombie crowds – indeed one such scene attracted calls for police and ambulance from confused onlookers – but these are almost entirely confined to the first act which is set (and was shot) in Dumfermline. After that, the only serious zombie action comes from our first introduction to Seren and Kate, a scene which is also used in part as a splash panel prologue. In a bold move, several scenes leading up to this – the only time the film really turns into a horrific, balls-to-the-wall zombie actioner – are simply not shown.

There’s a deliberate lacuna in the storytelling so that we suddenly jump into an intense sequence we don’t initially understand – but do recognise. Perhaps Stu Brennan planned this from the start, maybe these scenes were dropped from an early draft of the script, or maybe he was going to shoot them but time and money got in the way. Whatever the reason, it’s a brave and in my view successful move which really wakes the film up and reminds the viewer that, however much this may be a slowly churning character study, it nevertheless features the wholesale reinvention of humanity as deadly packs of flesh-eating ghouls, just like all good zombie flicks.

Cinematographer David Izatt (also a producer and appearing briefly on screen as a zombie) shoots everything close-up and hand-held, occasionally tipping the film over into excessive shakycam, but he is also able to capture some lovely countryside shots, including drone footage, once they’re out of Dunfermline and on the road to Skye. Sarah McCracken of Sarah’s Scars provided the make-up effects. 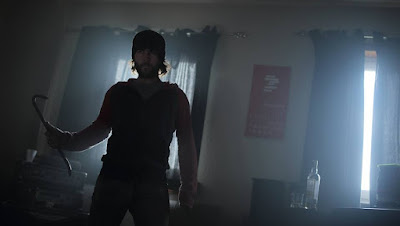 There are some little nods to other British zombie films – a caption that alludes to 28 Days Later, a cricket bat for the Shaun of the Dead fans – but there’s no attempt here to be clever and certainly nothing humorous. This is as dour and unforgiving as a Scotsman’s postcard: everything is terrible, life is empty and hopeless, almost everything we know has gone, the rest of our days will be a struggle for existence, if we’re lucky it may be short, weather fine, how are you?

In other words, a fantastically bleak view of the apocalypse and a great addition to the UK zombie scene.

Shot in March 2014, with a few days’ extra shooting in Verona, Italy for some flashbacks, Plan Z was test screened in Sunderland in October 2015. The world premiere was at the HorrorHound Weekend in the Cincinatti on 19th March 2016 where Stu won Best Director and was nominated for Best Actor. The film was also shown at the September HorrorHound bash in Indianapolis where it was made available to punters in two special collector’s editions: an early DVD that included a black and white version of the movie as a bonus – and a VHS tape.

Invincible Pictures released the regular US DVD in October 2016. A British disc was expected to follow shortly afterwards but the stars aligned nicely for the movie and that was put back to early 2017 in favour of a theatrical release through Cineworld in November. 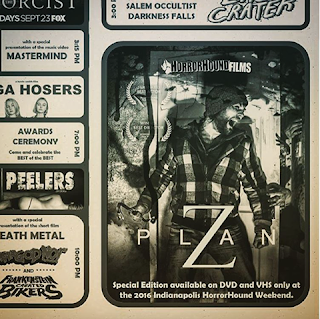 Since shooting Plan Z Stuart Brennan has been a busy man. He wrote, produced and starred in a contemporary reworking of A Christmas Carol, directed by Izatt and with Morrison, Wake and Horan in the cast. Then came Tomorrow, a drama about a soldier returned from Afghanistan. Again Stu wrote, produced and acted; Martha Pinson directed that one; the cast also includes Stephen Fry, Paul Kaye and warbler Joss Stone. Most recently – so recent that it’s not even on the IMDb as I write this, Stu put his directing hat on again for Necromancer, a Napoleonic horror tale shot among the beautiful landscapes of Dumfries and Galloway.

Some years back, Brennan did actually shoot (part of) another zombie film, Zombies of the Night with Eleanor James in the cast. It was never completed (the IMDb lists it as a short called ZotN) and isn’t likely to ever be now, let’s face it. But that’s fine because we have Plan Z which I strongly recommend to you if you like grim, dark, thankless tales of the zombie apocalypse.

One final thing I haven’t mentioned is the film’s token name value. Improbably, it's Horrible Histories creator Terry Deary! He’s an old friend of Stu’s and gamely agreed to play a shopkeeper.