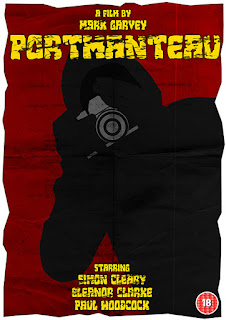 The multi-story films which we commonly refer to as anthologies were once given a different name, one that has largely fallen into disrepute. A picture like Dead of Night or Gilbert Harding Speaks of Murder was known as ‘a portmanteau film’.

The word ‘portmanteau’ has two other meanings. Originally it was a type of suitcase or travelling trunk which was divided into compartments, the earliest known use being 1579. Three hundred years later, in Alice Through the Looking Glass, Lewis Carroll had Humpty Dumpty explain to Alice that some of the odd words in Jabberwocky – like ‘slithy’ meaning ‘slimy and lithe’ – were “like a portmanteau - there are two meanings packed up into one word.” Hence comes the more common usage, applied to any word coined by bashing two other words together so hard that bits of them fly off. Smog, brunch and banoffee are all portmanteau words. I’m not sure when the film usage was first coined or indeed whether it comes from the Carrollian term or directly from the French luggage.

All of which brings me to Portmanteau, a smartly directed and very enjoyable multi-part horror film written, directed, produced, shot and cut by the (to me) previously unknown Mark Garvey. There are eight tales in the 85 minutes and while there’s no framing story, what we have instead is a loose narrative thread, in the sense that each story features a character from the previous one. There are no titles given for the segments on screen or in the credits (but see later). 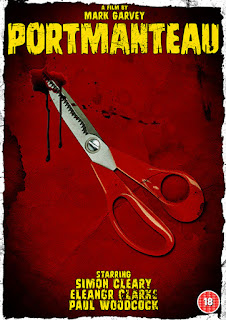 After some smartly designed opening titles, we kick off with a photographer (Simon Cleary) who receives an unexpected roll of film in the post. Developing the images in his dark-room, he finds something he would rather not see. The actual horror here - and in some of the other segments- is somewhat random and unexplained but I didn’t really mind that. These aren’t simplistically gruesome morality tales in the EC Comics mould, rather they’re just little slices of unpleasantness presented in a darkly entertaining way.

The delivery guy who brought the parcel sets off in his van along a country lane. He’s played by Paul Woodcock and apparently this is a sort of running gag in Mark Garvey’s work, Woodcock having played the same character in three previous shorts and one previous feature. (It's Kelton the Cop all over again.) What happens here is that he reverses up and pulls into the side to allow a car coming the other way to get past. But the other driver (John Harper) also reverses and pulls in. Both cars move forward, then politely reverse again. And so it goes on, progressing from embarrassingly British politeness to irritation to road rage and ultimately something worse than road rage.

I would really, really like to think that this is an homage to the ‘Pride’ segment of another portmanteau movie, the 1971 comedy classic The Magnificent Seven Deadly Sins. In this Galton and Simpson scripted vignette (originally made for TV as a Comedy Playhouse), Ian Carmichael and Alfie Bass are two drivers from different social classes, neither of whom will yield to the other on a narrow lane, creating an insoluble impasse. This is probably not an homage to that, but it would be nice if it was. 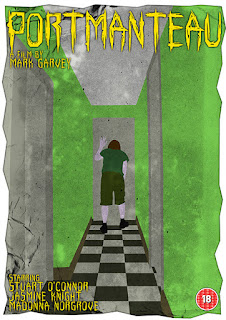 Our third tale concerns a young couple (Stuart O’Connor and co-producer Jasmine Knight) who are painting their flat. The fella is distracted by what he can see through the front door peep-hole: their neighbour (Madonna Norgrove) carrying heavy things out of her flat in plastic sacks. Surely she’s got parts of dead bodies in there. Or has she?

This leads into the weirdest segment, starring Mark Garvey himself as a birdwatcher, living in a remote (but nicely appointed) cabin in the woods. He shares this accommodation with his girlfriend, a blow-up doll whom he treats exactly like a human being. There’s a bizarrely hallucinogenic aspect to this tale of mental breakdown, not least a scene where the birder ‘conducts’ a (digitally created) starling roost plus – uniquely in a British horror film – stock footage of somebody handling a hawfinch. I’ve never seen a hawfinch. It’s been on my would-love-to-see list for 40 years but I’ve never yet spotted one. Outside of this film, anyway.

Story number five has an undeniable air of Berberian Sound Studio about it, concerning as it does a foley artist (this film’s composer Kyle Booth) hacking up vegetables to create the soundtrack for a horror film. Initially working alone on Zombiepocalypsegeddon, he is reassigned to work under a bossy supervising sound editor (Louise Blay) on a rediscovered lost classic, The Werewolf vs the Merman. And we are of course treated to the cheesy fake trailer for this epic monsterfest. A particularly fun sequence, which epitomises the creativity and innovation on display here, is a little musical number constructed from overlaying snippets of the sounds being recorded, visualised on screen in pop-up windows. It’s a rhythmic, percussive tune that comes across like Stomp on a table-top.

From Berberian Sound Studio we move to Joe’s Apartment as a writer (Kelli Watson) sits alone in her flat working on a script for the bossy producer from the previous segment (Victoria Markham). Constantly distracted by a seemingly invincible cockroach, she eventually snaps before suffering a genuinely ironic and awful fate. 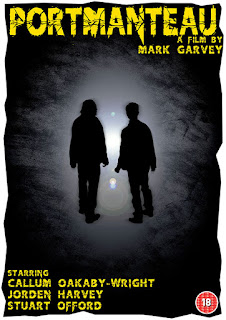 Our penultimate story has a guy in a rabbit costume (Stuart Offord) watching two other men, in the distance, constantly getting in and out of a car. It’s very perplexing until we switch perspective and watch the story from the point of view of the other two men (Callum Oakaby-Wright and Jorden Harvey) who are trying to bury a dead body, with limited success. This then feeds into a final tale which features the girlfriend from the painting-the-flat story and, not unexpectedly, the original photographer. And thus the narrative comes full circle, not unlike Jack Rosenthal’s classic portmanteau film The Chain, or the film which inspired that, Max Ophuls’ La Ronde.

I strongly suspect that not one of the films I’ve referenced in this review had any influence on Mark Garvey at all, and it is indeed quite possible that he has never seen or even heard of some of them. But I enjoy drawing unlikely cinematic comparisons so sue me.

As so often with motion picture portmanteaux that have more than three segments, Portmanteau fair gallops along. If you’re not keen on the story you’re watching, hang on for ten minutes and something else will pop up. But astoundingly I did actually enjoy everything that I was watching. Sure, some of the acting won’t be winning a Bafta anytime soon, and a few segments are stretched just to the limit of acceptable repetition, but there isn’t actually a duff story here. Moreover, there’s tremendous variety in terms of realism, humour, approach and execution. It’s a real smorgasmord of horror vignettes; every one is a little cracker in its own way and the links that build to a circular narrative provide a cohesion that makes the whole film – unlike so many anthologies – greater than the sum of its parts. 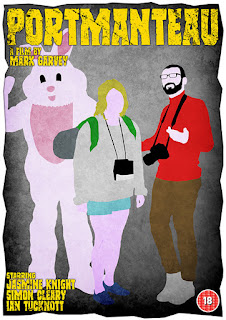 I mentioned at the top that Mark Garvey was an unknown name to me but he’s not new to the film-making game. His IMDB page lists shorts back to 2003, although many more within the last three to four years. In fact, on closer inspection eight of the listed shorts are the segments of Portmanteau, respectively titled Exposure, Courtesy, Proxemics, Murmuration (told you the starlings were important!), Substantiation, Scuttle, Patience and Double Exposure. Any one of these tales certainly could stand alone as a short, but the linking factors show that this project has been conceived as a feature from the start and isn’t just a mash-up.

This is Mark Garvey’s third feature-length work following 874 Miles, a drama about cycling from Lands’ End to John O’Groats, and Postscript, a post-apocalyptic anthology. All of the cast have worked on previous Garvey films but none of them seem to have worked on anything else. It’s quite the rep company he’s got there.

At time of writing, Portmanteau is being submitted to festivals. Catch it if you can.