15 years on the web - an announcement

So, according to the Wayback Machine, I launched this website - in its original incarnation and at its original URL - on 24th January 2002. Which means that today the MJ Simpson website celebrates 15 glorious years. 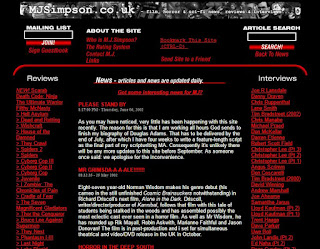 To the best of my knowledge (and I'm perfectly willing to relinquish this crown if needs be) I believe this to be the longest-running single-author film site on the web. There are film sites that pre-date mine, but they're group efforts. Every word here was written by me.

A few stats. There are now 693 films reviewed on here, 40 of which are so obscure they're not even on the IMDB. Some people think I only write about the 'British Horror Revival' but that only accounts for 224 of these reviews. The total word count of all reviews is 1,041,834. Approximately. In addition, there are 312 interviews here, totaling 588,236 words, every single one of them lovingly typed by my fair hand. (Or in some cases, copied and pasted from an email...)

An unexplained recent boost in popularity means I now get 35-40,000 page views every month. For some reason. And another 5,000 or so on my British Horror Revival blog. My most popular reviews are The Haunting of Radcliffe House, The Seasoning House and 47 Meters Down. My most popular interview is Martine Beswick.

Thank you to everyone who visits the site, especially those of you who link to or retweet my announcements of new content. I don't make any money from this, it's purely a labour of love because I love writing. A huge thanks also to everyone who has sent me screeners over the years.

To celebrate my 15th anniversary, I am sending a four-question mini-interview to 100 of the biggest names in Hollywood. I came up with a list of directors, producers, writers, actors, composers and effects artists - some are legends, some are cult heroes, some are just my favourites - and today posted a letter, by airmail, to each one, care of the address listed on fanmail.biz. Here's what I asked them:
I'm not going to list who I wrote to, but I will tweet when/if I get a response from anyone and will add the interview here, even if it's just four words. To give you some idea, here's a bunch of people who probably would have been on that list if I hadn't already had the pleasure of interviewing them: Charles Band, Doug Bradley, Roger Corman, EG Daily, Ken Foree, Terry Gilliam, Lance Henrickson, Lloyd Kaufman, Udo Kier, Debbie Rochon, George Romero, Julie Strain, 'Weird Al' Yankovic

I don't expect to get a reply from everyone, but let's see, shall we? And here's to the next 15 years.