Geezer gangster films, man. They’re not my bag. Genre crossovers aside, I don’t think I’ve seen a film about East End criminals since Lock, Stock and Two Smoking Barrels. Yet there is this massively popular and successful subgenre out there. Low/mid-budget film-makers pump these things out, onto Netflix and the shelves of Asda and Morrisons, and they sell in huge quantities.

Step forward, 88 Films. This Leicester-based label has spent the past few years releasing critically acclaimed versions of old horror and exploitation titles, including a number of Troma and Full Moon films as well as Asian extreme horror, 1970s Italian thrillers, all sorts of malarkey. They have also released three recent pictures by my mate Steve Lawson: Killersaurus, The Haunting of Annie Dyer (aka Nocturnal Activity) and Footsoldier (aka Rites of Passage aka Survival Instinct). So when 88 Films decided that they wanted to try their hand – as successful distributors so often do – at producing, they turned to Steve. And in considering what sort of film could be made on a small budget and safely turn a decent profit, the obvious choice was geezer gangsters. 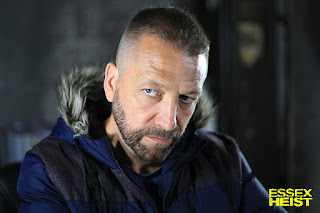 Which brings us to Essex Heist, which I viewed at a cast and crew screening at Phoenix Arts in January 2017. Against long-term expectations, I found myself watching, reviewing – and indeed, enjoying – a geezer gangster film.

Now, my enjoyment and appreciation of the movie was not dependent on it being a Steve Lawson joint. I have always striven for critical objectivity and just because a friend of mine made (or was involved in making) a particular film does not mean that I will give it a free ride. If I had hated Essex Heist, either because it was a bad film in itself or because it was fine for what it was but archetypal of a genre I generally can’t stand, then I would either have written a negative (but constructive) review or, more likely, simply not reviewed it.

But I think the film’s strength lies in the fact that, not only do I have no specific interest in this genre per se, nor does Steve. And nor, to judge by their catalogue, do the 88 Films guys. Approaching a cinematic genre from an outside standpoint can be very beneficial because one is not constrained by accepted practice and conservative tropes. I’m reminded of 28 Days Later, inarguably one of the best British horror films of the modern era. Danny Boyle has never had any interest in, or detailed knowledge of, horror films. He makes no bones about not being a horror fan and having only a minimal awareness of zombie cinema. And that’s one of the reasons why his zombie film turned out to be so impressive, influential and important. 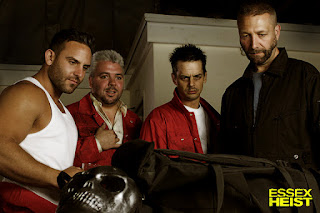 On the other hand, The Gathering was made by someone with no knowledge of the horror genre and it’s absolute shit so, you know, it’s far from a foolproof method.

Glenn Salvage stars as Jez, who runs a dodgy car-shop fixing up old motors in less than legal ways. Salvage starred in The Silencer ten years ago, one of the micro-budget actioners that Steve used to make. A surprisingly frequent name on this site, I have also seen him in Project: Assassin, Distant Shadow, Left for Dead, Ten Dead Men and The Dead. He’s also in the cast of Survival Instinct but only as a voice on a phone. (In a neat bit of mirroring, Helen Crevel is a phone voice in this movie.)

Jez works for local crime lord Terry Slade, as indeed does everyone else slightly crooked in this unidentified English seaside resort which is variously represented by stock footage, Leicester streets near Steve’s studio and the exterior of the Coalville shoe warehouse where much of The Wrong Floor was filmed. Jez has three blokes working for him on the motors. There’s muscular, intelligent Andy, played by Adam Collins who was the sergeant in Killersaurus and a copper in Justice League. That’s probably the only time you’ll ever see those two films mentioned in the same sentence but hey, if you’re playing Six Degrees of Kevin Bacon that sort of thing can be a winner. 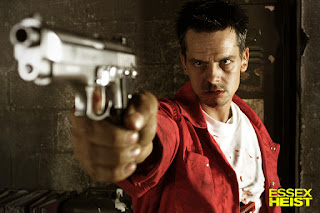 There’s weaselly junkie Daveyboy, played by Marcus Langford who was Twinkle Toes Tommy Duggan in The Wrong Floor (he’s the boxer who spews up green stuff in the trailer). Langford is an old hand at this sort of movie having also appeared in such do-what, knock-it-on-the-‘ead, didn’t-you-kill-my-bruvver titles as Age of Kill, I am Hooligan, Gatwick Gangsters, Rossi’s Boyz, Vigilante Style, Bonded by Blood 2 and Rise of the Footsoldier 3. He was also, like Yours Truly, in Leicester-shot Bollywood nonsense Yamla Pagla Deewana 2. And there’s mild, naïve Clive, played by Dean Leon Finlan, a Brummie actor who has been working on stage since he was eleven, recently moving into film.

Basically, these three look like Vin Diesel, Steve Buscemi and my brother-in-law. Although I appreciate that’s only 66% helpful to most of you. 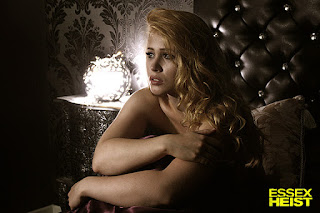 Andy has been dating Stacey (Georgia Annable: Whiteblade) who is not only Terry Slade’s niece, she actually has enough dirt on her uncle to keep her in the jewellery and shoes to which she has become accustomed. Through Stacey, Andy has discovered that Slade is personally bringing a million quid in cash down from his casino in Nottingham. Which gives Jez an idea for an audacious blag, a scheme which the other three all sign up for.

Quite how they think they will get away with this when Slade controls the whole town’s underworld is glossed over to some extent. Principally, as so often in crime cinema, they are driven by greed. Jez would like to move away from sitting in a little backstreet lock-up managing three bozos in a cut-and-shunt car-fiddling scheme. Andy, who is genuinely smitten with Stacey, would like to settle down with her. Clive needs money to pay for his mum’s care home costs. And Daveyboy owes some dealers for some smack. (Richard Carter turns up briefly in the first act as a debt collector; his previous credits include London Heist, Shooters Hill and The Hatton Garden Job.)

The blag goes almost according to plan. Slade is played by Steve Dolton, taking a break from acting on the other side of the law as a detective in British horrors Devil’s Tower, Nocturnal Activity and The Curse of Robert the Doll (he is also in Killersaurus and Zombie Undead). His driver and minder, who both skedaddle the moment a gun is pulled on them, are Wrong Floor director Marc Hamill and the incredibly busy Ryan Flamson (Mickey Firefirst in Marc’s film). 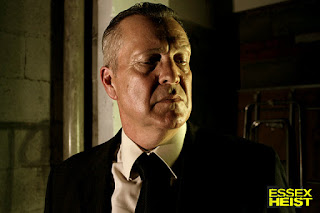 Back at the lock-up, things fall apart. Something has gone wrong horribly somewhere which means one of the four crooks is cheating on the others. Honesty, you can’t trust anyone nowadays. Hence arguments, hence recriminations, hence violence and bloodshed. Don’t expect a happy ending.

Essex Heist succeeds on three counts: a quartet of excellent performances (and indeed top work by the supporting cast, which also includes Raven Lee from Nocturnal Activity in a shower scene); Steve’s usual professional and solid direction; and a cracking script which clearly delineates and motivates the characters. One of the things that I dislike about the geezer gangster genre (based, I will admit, largely on trailers and other marketing) is that it always seems to glamorise its protagonists (and antagonists). Essex Heist does no such thing. These are four awful men. They may vary in their awfulness. Clearly Daveyboy is a snivelling little shit whose dependence on crack makes him the least trustworthy member of the gang, none of whom you would ever ask to feed you cat while you’re on holiday. And clearly Clive is a good lad who loves his mum, doesn’t want to get involved in any violence and has a genuine talent for car maintenance that he could put to better use with a job at Kwikfit.

But none of them are good people. You wouldn’t ever want to go for a drink with any of them. Thus their downfall is of their own making, a retribution both just and deserved. 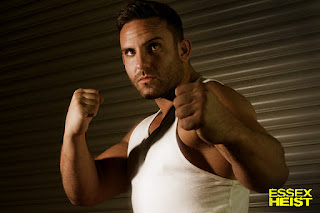 Steve produces with his usual adroit efficiency, keeping most of the action within the lock-up, represented by his own studio. It’s a system which, one cannot deny, works better in tales of small-time crooks than it does in epic sagas of genetically recreated dinosaurs (however much fun those may be…). A particularly nice motorbike – belonging to Andy and an integral element of Jez’s plan – gives a veneer of production value that raises the perceived budget above the actual one.

So I was very impressed by Essex Heist, which runs a taut 75 minutes and delivers a coherent, narratively satisfying story about believable characters behaving in a credible manner. That said, I am aware that I am not the target audience for this. So if you are that person who actually buys all the geezer gangster films that get made, someone who strolls towards the checkouts in Asda with your trolley of loo paper and frozen chicken only to pause in your tracks as you pass the DVDs, your eye caught by a glaring, shaven-headed thug toting a shotgun, inexorably blurting out: “Blimey! That looks good!” and chucking a casual blu-ray on top of your four-pack of tinned spaghetti hoops – then this may or may not be your cup of Rosie Lee. I don’t know. I don’t know you so I don’t know on what criteria you judge this sort of thing. 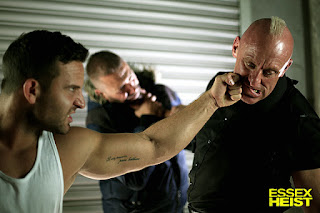 But if, like me, you’re much more at home watching a werewolf, killer robot or swarm of giant ants – but are looking for something a little different, a non-horror title to clear the cinematic palette – then you could do a lot worse than Essex Heist. And if this does well, and 88 Films proceed to further production, then who knows what homegrown delights we might see from them in years to come.

In the meantime, Steve Lawson says he may make a shark movie. And I freaking love shark movies, me. Bring it on.