I reviewed Mark J Howard's debut feature Lock In, a tale of corporate coulrophobia, in 2014. Three years later, the film was released on DVD on  both sides of the Atlantic as Clown Kill, so I took the opportunity to ask Mark for an interview and he provided these great, detailed answers. 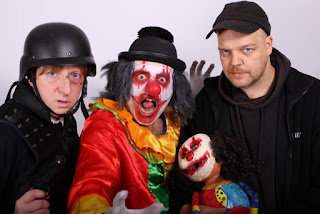 What was the original inspiration for Lock In? How well do you think you achieved what you set out to do?
"We’d been renting a huge business suite in a modern office block at the foot of Pendle Hill (home of the infamous Pendle Witches in the 17th Century), to serve as production office and edit booths while we were working on a series of TV ads and other advertising films, and it was a bit creepy at night, to say the least. Pipes would expand and contract, floors creaked, dodgy electrics made the lights flicker and go out and the regular winds barrelling down Pendle Hill would howl around the corners of the building, which kind of puts you on edge when you’re in the building on your own. When you’ve been working at the office for 48 hours straight to meet a deadline, your mind doesn’t always  think straight. Then, on the way out, the lift got stuck, and I hate lifts, almost as much as I dislike clowns, so the seeds were already starting to grow.

"The story developed over the next few months as we workshopped ideas with the already-cast actors. I think we achieved our goal by introducing a creepy new clown, and I was happy with the comedic chemistry with the security guards, but we dropped a major bollock and didn’t notice until we were in the edit. In the original script the clown breaks the fourth wall as he regularly addresses the audience between kills, which makes more sense once you’ve seen the end scene and know where the character of Jenny is at, but in the edit it suddenly looked like we were trying to rip off Funny Man, and not doing it very well. So, at the last minute I brought in my long-term collaborator, actor and comedian Peter Slater, we sat down at the editor and chopped things away, reduced or removed all of Charlie Boy’s one-liners and pieces to camera, heavily toned down Jenny’s drunken pub attack scene, and added more security guards stuff for balance. The end result is one huge compromise. 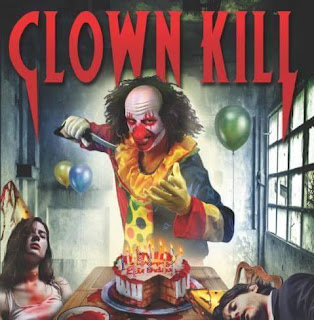 "During filming one of the leads had serious personal issues going on, and she became difficult to nail down, so that brought a whole slew of new problems that had to be addressed during the shoot. We’d only budgeted for a 21 day shoot, and we managed to shoot it in exactly 21 days, but it was one nightmare after another. I’m happy with the finished film, but if luck and circumstance had been on our side on the day, it could have been so much better."

What aspect of the film do you think works best, and what aspect would you change if you could?
"The personality clashes between shop-steward Gobby Karen and John the Boss are my favourite performances in the film,  Rachel was an absolute revelation, her sense of timing is better than any comedian I’ve ever worked with. She hit every beat, delivered every time, and that’s something I’ve never encountered before. If I could change anything I’d have found a way to reinstate some of the excised clown footage, Roy’s amazing in the role, and some of my favourite scenes are the ones we had to cut out. That’s usually the way though."

How did you assemble your cast, and what effect has Jessica Cunningham’s subsequent reality TV career had on awareness of your film?
"Apart from Rachel (who plays Gobby Karen) and Holly (Sally), the script was written personally for the actual actors who starred in the film. Rachel and Holly were late additions to the repertory company I’ve been building over the last 20 years; so I knew who would be playing what character as  I wrote the script. We’d just come off a series of TV commercials with Jessica, and I’d had a big public row with her in a Costa, and I knew I’d found my feisty office worker that day. 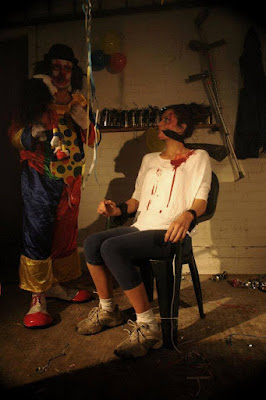 "Two hours after Jessica was confirmed as an Apprentice contestant, my phone went absolutely crazy, as the press bombarded me with questions. All of the major tabloids had found out about her 'clown rape' past and wanted to know more. It was actually my very significant birthday that day and I was pissed up. My wife banned me from speaking to the press in case I got carried away or said something I might later regret, so I had to let Roy (Basnett) do the talking, and as a result we got some great sensationalist headlines in the national tabloids. I imagine some of her fans might be curious enough about the film to watch it, but other than that I doubt her rapid rise up the greasy celebrity pole would benefit the film.

"She’s been really busy these last few months with her fashion brand and new-found fame, so we haven’t managed to catch up on things, but before she hit the limelight we had a chat and she did agree to do the sequel. We had two huge fans of Jessica, who are also top-flight footballers from a famous northern club, make an offer to finance a sequel under the Enterprise Investment Scheme, but a week later the Inland Revenue started cracking down on footballers investing in fake films to offset their taxes, and they got cold feet. Got a great script out of it, though, featuring Charlie Boy’s Undead Army of Clowns. If this first film is well received, and if there’s a market there, the sequel might just happen."

What are your favourite slashers and/or clown horror movies?
"I was never a fan of the Halloween films (though I’m a big fan of the third one), but I loved the first couple of Friday the 13th’s. I abandoned that franchise when I went to see Part 3 in 3D on its initial release, and the projectionist got the lens assembly on wrong and completely ruined the presentation. Huge fan of European slashers, especially love Stage Fright and Amsterdamned, but don’t watch clown films. Like I say, clowns and lifts, not my bag. I don’t think I was abused by a clown as a child, but I think something must have happened to fuel my unease about them. The new adaptation of It looks fun, though, but Tim Curry’s a hard act to follow." 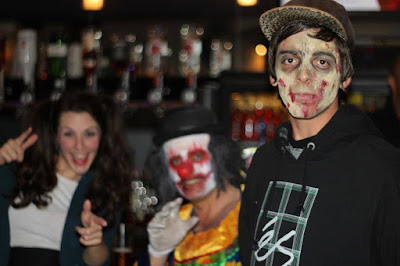 What have you been working on since finishing Lock In?
"Adverts and pop promos have been the bread and butter that keeps the wolf at bay, We’ve shot a big zombie film set in Liverpool, about a terrorist attack on Ellesmere Port petro-chemical plant, just at the moment they are destroying an experimental battlefield biological weapon developed by the Russians and seized in Syria. The resulting gas cloud threatens an extinction-level event as it slowly creeps across the UK in real time, turning the victims into blood-crazed zombies. The film is called Undead Air and will hopefully be ready by the end of the year. It’s quite heavy on visual fx, but I’ve a great team doing some amazing work.

"At the moment we’re  just prepping our new docu-drama American Psychopath – the Ripper of Whitechapel, which is a period piece bringing a post-modern, fresh perspective on the Jack the Ripper case. We’re shooting this in 4K and Super 16, with the murders being covered by raw and grainy Super 8 on my trusty old Beaulieu, filming begins second week of May for three weeks. Because we’re still having to work on promo films for clients, our more narrative films tend to take forever to complete, but we’ve a delivery deadline for the Ripper film so it’s all hands on deck. Both films will feature the same cast and crew, with a few additions, that made Lock In."

Finally, can you tell me a bit about the super 8 films you used to make with Tony Luke?
"I miss Tony so much, and it doesn’t feel like fifteen months since we lost him. We got to know each other in the very early '80s. We were the same age, both at secondary school, both making animated super 8 monster movies,  and we both contributed to Junior Filmworld, a magazine/newsletter for wannabe junior super 8 Spielbergs. Tony lived in the North East and I lived in Manchester, so hundreds of miles apart, but he used to ring regularly and we’d post our only prints of our latest films to evaluate each others work. We’d swap ideas, script notes, designs and special fx techniques we’d discovered, and generally encourage each other. 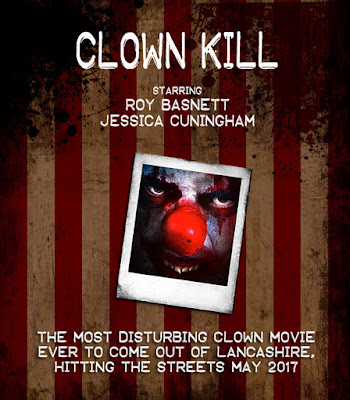 "He found a supplier in the States who could provide T rex latex skins, all ready for you to insert an armature into, and he was off. His films always had more pazzaz than mine, my always came back with the note 'Sorry, your splices didn’t go through the projector too well'. Tony was my first animation collaborator, albeit long-distance, and somewhere I’ve got a box of photos of his animation creations, including his first Satannus puppet. I need to find it and pass it on to his sister Fran for the archive.

"When we premiered Lock In I spoke to Tony, he asked me if I’d be interested in directing a project he had in mind. I was busy, I said if he could postpone a few months I’d be able to discuss it further and commit. It never happened. A few months later Tony started with his back and neck pain, and he had to focus on getting better. I was sure he’d beat it again, he was a real fighter. It’s a weird thing when someone you’ve known since you were kids dies, makes you put things into perspective. Facebook hasn’t been the same since he left."