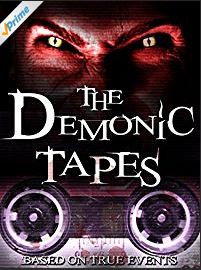 The title, the brief POV prologue and the logline (“In 2007 a series of tapes were found in the basement of a London home”) all suggest this could be more found footage rubbish but, Jove be praised, it’s not. What it is instead is a genuinely terrifying ghost story in the true James-ian tradition. Which should come as no surprise because this is the latest feature from Richard Mansfield, card-carrying MR James fan and one of the UK’s most consistently impressive horror film-makers.

Darren Munn gives a largely solo, largely wordless, completely engrossing performance as the unnamed lead (we’ll call him The Man), spending Christmas alone in an old Victorian townhouse. His two flatmates have headed off for Chrimbo so there’s just him and the cat. There are a few one-sided phone conversations and a brief scene about an hour into the 72-minute feature with a visitor, but for the most part this is Munn on his tod, reacting to things. Subtle reactions to subtle things. 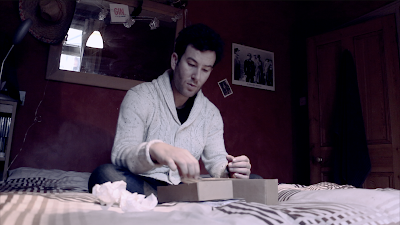 The titular tapes are a box of microcassettes, plus a Dictaphone, which The Man finds in the cellar and listens to out of interest. What he finds are recordings of a medium visiting the house in 2003 in response to the then tenant’s request for help. So in a sense the story largely plays out as an audio drama, except that creepy things start happening on screen. A door opens. A shrouded figure appears briefly.

The tapes include both the medium’s comments and occasional distorted horror voices, on the cusp of intelligibility. Sometimes the tape audio is diegetic, as The Man listens to what we hear, but often it’s a counterpoint, visual story and audio story perfectly complementing each other as Mansfield uses his impeccable understanding of cinematic horror pacing to incrementally ramp up the terror.

A little diligent research on the web reveals that the medium has died but her twin sister is accessible, so The Man invites her round and offers her the box of tapes, leading to the single two-hander scene. (Both sisters are ably played by Alice Keedwell.) On two other occasions the story wisely escapes the confines of the house as The Man sets out into London for a montage of fairground rides, Christmas markets and tube trains. Otherwise, this is basically Darren Munn wandering around a house looking puzzled, and it is a testament to the man’s acting that he conveys so much credible emotion. The Man becomes unnerved, but only very slowly and slightly. Most of what we see, he doesn’t. 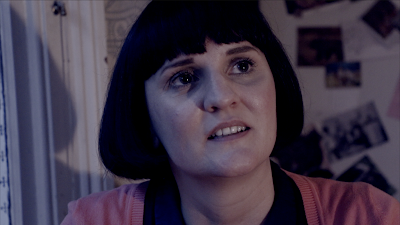 What really, really, really makes this work – and it’s something obvious which regular readers will know is a frequent bugbear of mine – is the soundtrack. Specifically that when something spooky appears or happens there isn’t an accompanying music sting. I’ve written before, at length (not least in my review of the otherwise generally very good The Other Side of the Door) about how a crashing chord every time a ghost appears makes things less scary. Richard Mansfield, student of the MR James School of Unnervingly Ambiguous Horror, understand this perfectly. The fact that neither the character on screen nor the film itself acknowledges what we just saw (or think we saw) makes what we saw (and what we might see next) far more terrifying than anything with a blaring, jarring ‘look at the scary thing’ leitmotif. Our attention is focused on the whole screen, not just young Mr Munn, as we scan the rooms and doorways behind him for unnaturally moving shadows or a hint of a white sheet. 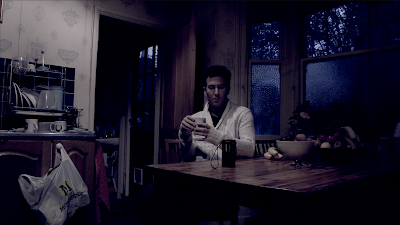 This is Munn’s third collaboration with Richard Mansfield, having previously appeared in The Mothman Curse and Video Killer. He was also in two films directed by Richard Mansfield’s husband Daniel, who provides additional tape voices here. (Munn’s other horror credit is the very odd Paranormal Sex Tape which is structurally similar in featuring lots of wordless scenes. I don’t think either of the Mansfields was involved with that, although perhaps one of them could be the pseudonymous director ‘Dick Van Dark’…?) As for Alice Keedwell, making her film debut here, she is half of award-winning cabaret duo House of Blakewell. Back in 2013 Richard Mansfield used his distinctive shadow puppet style to animate a video for House of Blakewell’s morbidly witty song ‘The Truth is…’ which you can find on YouTube.

The effective soundtrack is credited to Pig7, an “experimental, improv electronics duo” whose music, according to their Facebook page “can be described as soundscape, dronescape, filmatic, ambient horror, spacerack, hambient, sconescrape, stonecrop with a hint of Cronenberg.” 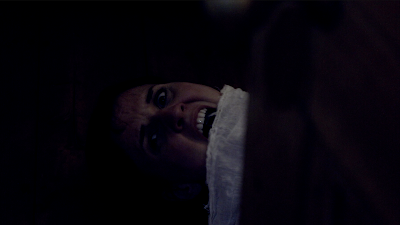 Shot in late 2016, in a few days for a few hundred quid, The Demonic Tapes was given a VOD release on Amazon Prime in May 2017, making it Richard Mansfield’s fifth live-action horror feature in three years (The Secret Path and Scare Bear are the other two, plus he’s still making his shadow-puppet shorts). The working title was Fright Christmas and it was briefly known as House of Christmas Evil before Mansfield settled on a less festive but more commercial and direct title. The film is set at Christmas but that's largely incidental. Fright Christmas would still be an awesome title for something though!

A little less avant-garde than his previous movies, The Demonic Tapes shows a maturing of the director's style and an increased, well-deserved confidence. It is also – and I really should stress this point before you tootle off to Amazon and watch the movie – extremely scary. Really very, very frightening indeed. I watched it early one morning, sun shining in through the windows of my own large, Victorian house. I was seriously creeped out. Had I saved my viewing for the evening when I was alone (Madame at her mother’s, young Sir at his theatre club) I would have been crapping myself and would certainly have had great difficulty sleeping that night. 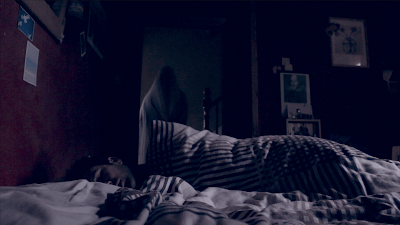 This is a dreadful film – literally. In that it is absolutely jam-packed full of dread. No fancy special effects, no stupid cat-scares (though there is a cat), no plot-hole riddled script, no big budget hype, just unexplained supernatural imagery and ideas woven into a quietly terrifying tale of a man spending Christmas alone in an old house. The implicit horror revealed by the tapes plays on The Man’s mind as it plays on the viewer’s. He doesn’t know he’s in a horror film, we know we’re not, but in both cases there’s a dread of what might be happening just beyond the mortal realm.

Powerful, gripping, expertly crafted, The Demonic Tapes is, in this viewer’s humble opinion, the scariest British haunted house film since Ghostwatch. I can give no higher praise. As I have said before in relation to other of my favourite indie film-makers, the only reason I’m not giving this A+ is because I want to see what Richard Mansfield makes next.