It’s an odd thing to say about a film which opens with a young woman slitting her wrists, but Venus Drowning is not nearly as bleak or depressing as the director’s previous films.

Andy Parkinson is the fellow who brought us the brilliant I, Zombie - George Romero meets Ken Loach - and followed it with a partner piece, Dead Creatures, which was about a group of women where the first film had been about a single bloke. But there’s no zombies on show here, just a very, very weird thing lying on a beach.

Jodi Jameson stars as Dawn who, after her failed suicide attempt, is recommended by her psychiatrist (Brendan Gregory: Dr Reece in Dead Creatures) to spend sometime away from London, preferably at a location which has happy memories for her. She heads to the (out of season) seaside and takes up residence in an old family flat where she spent childhood holidays. Some of her toys and drawings are still there. Although she doesn’t know anyone in the town, she strikes up a friendship with local taxi driver John (Bart Ruspoli: Christian in Dead Creatures, later writer/producer of Devil's Playground) which looks promising.

She also finds a small, weird, limbless, faceless creature on the beach and, for some reason, decides to take it home and care for it. It’s alive, but what is it? We never find out and, frankly, that’s not what matters.

What matters is that the the creature somehow feeds on orgasmic energy - something that Dawn discovers after her visiting friend Milla (Frida Show, who subsequently played the title role in a biopic of Warhol starlet Nico) beds John one night - and it excretes an addictive slime which Dawn tastes - as you do. From this oddball scenario there develops a relationship between Dawn and the creature which is at one and the same time maternal and sexual, something which would obviously be creepy even if one of the participants wasn’t a squidgy creature from the tideline. 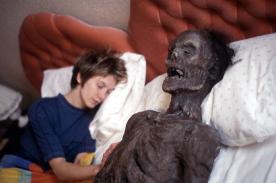 The idea of something which feeds on sexual energy is not completely original; the bonkers 1980s sci-fi film Liquid Sky (which Parkinson says he hasn’t seen) used a similar premise, but with tiny aliens in a flying saucer instead of a miniature marine monstrosity. The beastie grows in size and extends a tendril which makes its search for energy dangerous, even fatal, and although Dawn is not the direct cause of this, the film stands thematic comparison with Penetration Angst and Evil Clutch as well as the aforementioned Liquid Sky.

But the most obvious comparison is the work of David Cronenberg, most specifically The Brood - and this is an influence to which the director does admit. The precise nature of the creature isn’t important, no more than it was in The Brood or Shivers. What matters is how people react to it. (Parkinson describes it as “an alien baby mermaid with a mouth like a vagina.”)

Venus Drowning is a very weird film: part psychological introspection, part B-movie creature feature. It’s a movie which raises lots of questions but provides few answers and I like that. Fans of Parkinson’s work will lap this up and the absence of zombies proves that he’s no one-trick pony. That said, those people who hated I, Zombie because it wasn’t full of staggering cadavers moaning “Bwains!” will be equally confused and disappointed by Venus Drowning. Andrew Parkinson makes thinky films; if you don’t want to think, there’s a whole world of other films out there you can go watch.

Filmed in Cromer on the Norfolk coast in early 2004, Venus Drowning started playing festivals in 2006 and I caught it at the Festival of Fantastic Films in Manchester where, despite a midnight slot, it was warmly received by a good crowd who not only stayed to hear the director speak but insisted that he did so. Cinematographer Jason Shepherd, who has worked on concert videos for the likes of Snow Patrol and the White Stripes, continues his association with Parkinson, expertly shooting here on a mixture of Super-16, Super-8, Digibeta, Beta SP and DVcam, depending on what the scene demanded in terms of the main character’s psychological state. 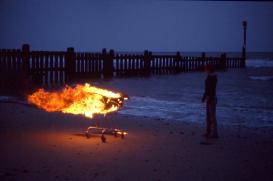 The stars of I, Zombie, Dean Sipling and Ellen Softley, helped with casting the film and Softley also appears briefly as Dawn’s mother. Parkinson himself makes an uncredited Hitchcock-ian cameo as a man with a metal detector. Mike Tucker, well-known for his effects work on Red Dwarf and Doctor Who, created the ‘thing’.

One day, somebody is going to write a great , and possibly quite pretentious, thesis about the work of Andrew Parkinson because each of his films gives so much opportunity to discuss, debate and argue: what is going on and what does it mean?