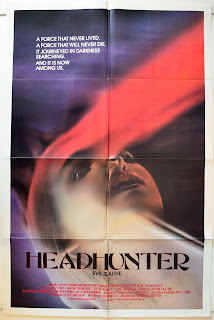 Headhunter doesn’t have any big name stars, it doesn’t feature an iconic monster, it emerged at the tail-end of the 1980s video boom. No wonder I’ve never heard of it. But that’s what I love - finding an old tape on a market stall and seeing what it’s like.

First off, I must give props (as the young people say) to whoever wrote the sleeve blurb: “Terror slowly grips the city of Boston...” Erm, the entire film is set in Miami, a fact which is mentioned frequently throughout the 90 minutes. Anyway...

What we have here is a police procedural. Detective Pete Giuliani (Jake Speed himself, Wayne Crawford - director of The Evil Below and Snake Island) has been thrown out by his wife (June Chadwick: Jeanine in This is Spinal Tap, Lydia in V, also in Forbidden World) in favour of her lesbian lover (Helen Kriel, who wrote the 1996 movie Kama Sutra!) and takes up residence on the couch of his police partner, Detective Kat Hall (David Cassidy’s ex-wife Kay Lenz: House, Prisoners of the Lost Universe) who is divorced and is currently an item with a tall, handsome cop named Roger (John Fatooh, a former competitive cyclist whose claim to fame is playing a prison guard in a couple of episodes of Days of Our Lives).

Giuliani and Hall are assigned to investigate a series of gruesome murders among the city’s small Nigerian community. “They’re just negroes,” says their racist boss (Steve Kanaly: Pumpkinhead II and a regular on Dallas), “and they’re not even our negroes.” They also get routinely mocked by a snide blonde cop played by Ted Le Platt (Terminator Woman, Project Shadowchaser II, The Mangler, Cyborg Cop II)

The bodies are decapitated, but there’s no sign of a struggle or forced entry. An African Shaman named Samuel Juru (Sam Williams: Shaka Zulu) seems to know what’s going on, but when Giuliani follows him into a meat-packing plant, there’s no sign of him and then something throws the detective out of a window (into a convenient skip). An answerphone message from Giuliani turns out to be a fake when it lures Hall to old railway sidings where she is chased by costumed African dancers chanting and waving flaming torches.

After Juru is also slain, the cops break into his house and find a book by a white academic expert on African mythology, Robert Sinclair (Gordon Mulholland: Cold Harvest) who tells them that dismembering the monster is the only way to defeat it. When Giuliani finds that his wife, seeking reconciliation, is actually a shape-shifting African demon, he races off to the nearest hardware store, gets there moments before the owner locks up and impulse buys the first chainsaw he can find, which conveniently has petrol in it. Then he races back to Hall’s house where she is waiting for Roger to return with a Chinese meal. Except of course it’s not Roger, it’s the demon (which has a name that I couldn’t make out).

I must pause briefly here to applaud one of the most sensible things I have ever seen anyone do with a chainsaw in a horror film. Seeking entry to Hall’s home, Giuliani attacks the locked front door. But rather than just smashing randomly or attempting to cut a hole big enough to climb through, he saws a short diagonal line above the lock, another below it to make a triangle, then kicks the door open. This is the quickest and most efficient way of opening a locked door using only a power tool. Well done sir!

The film climaxes with Hall and Giuliani hacking away at the demon in the back garden, cutting off first one arm, then another arm, resisting the urge to shout “’Tis but a scratch!” and then decapitating the beast. The racist police captain, who has all along poured scorn on the idea that they were dealing with a supernatural killer, arrives and sees precisely what has been doing the killing.

And that, apart from a prologue and brief epilogue set in Africa (without any of the main characters) is pretty much it.

Headhunter isn’t bad, truth be told. It’s different, it’s quite exciting and the central duo make likeable leads, even if there is a little too much of the soap opera stuff, especially at the start. It also scores kudos points for intercutting the final fight with the film that is showing, unwatched, on Hall’s TV: The Hideous Sun Demon. The plot is a tad fuzzy, not least in that although there is some talk of the demon having followed the Nigerian refugees to the USA, there is no indication of how it got there nor of why it was chasing them in the first place. Apart from Sinclair, most of the other victims - and the African villagers in the prologue - seem to have actually summoned the demon, so it’s sort of their own fault. Also, as this was - stock shots of Miami aside - filmed in South Africa, the black folk in the African scenes looked only slightly more Nigerian than me or you. As they carry their cowhide shields and asagais around their kraal, you can’t help adopting a mental voice like Michael Caine and thinking: “Zulus - ’undreds of ’em.”

The whole shapeshifting thing, which in retrospect explains the scene where Giuliani follows Juru into the meat warehouse, is never really explored, and we also have to wonder whether the demon they fight at the end has already killed Roger or was Roger all along. We know he killed the wife and her lover because we saw them dead, but why does the demon remain in the shapely form of June Chadwick, then shortly afterwards decide to abandon John Fatooh’s fizzog for the scary monster face depicted on the video sleeve? To add to the confusion, Fatooh is credited on screen with playing both Roger and the ‘Headhunter’. Sympathetic leads, some nice handheld camera work and a genuine sense of mystery compensate for the vague storyline, although another demerit must be counted for the demon attacks which start with a speeded-up POV rush and then tend to rely on fast cutting between static shots done at odd angles plus discordant stings on the soundtrack.

Swiss-born director Francis Schaeffer is the son of another Francis Schaeffer, who was a well-known evangelist apparently. Schaeffer Jr has written several books, both fiction and non-fiction, as well as plenty of journalism. He is also - or at least has been at one time - an artist and a documentary maker. His other films, all made between 1986 and 1991, are sci-fi actioners Rebel Storm (which also featured Crawford, Chadwick, Kriel and Mulholland) and Wired to Kill/Booby Trap plus, oddly, knockabout comedy Baby on Board.

The Inaccurate Movie Database credits the screenplay to ‘Len Spinell’ who ‘also wrote’ Quiet Thunder (which also starred Crawford and Chadwick!). In fact the credit is ‘Len Spinelli’ but I believe that to be a pseudonym - and here’s why: the credit block on the front of the video sleeve says the screenplay is by Andrew Lane and Wayne Crawford. Granted, this could be written by the same person who wrote the blurb on the back about the film being set in Boston, but I certainly put more store in a video sleeve credit block than the man-in-a-pub vagaries of the IMDB.

The only company logo in the on-screen credits is Gibraltar Releasing Corporation but the credit block reads ‘Crawford/Lane Productions and Gibraltar Releasing Organization (sic) present...’ Lane and Crawford worked together on eleven films in total (twelve if we count this one) including Jake Speed, Night of the Comet and Servants of Twilight.

The credit block lists three producers: Lane, Crawford and William Fay who started off on little indies like The Supernaturals and Hollywood Vice Squad but progressed to executive producing the likes of Independence Day and Superman Returns! The on-screen credits however list only one producer: Jay Davidson (Rebel Storm), possibly another pseudonym. Both sources agree that Joel Levine was executive producer. One thing the credit block doesn’t list, oddly, is a director! 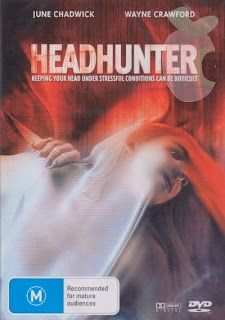 Cinematographer Hans Kuhle also lit Laser Mission and Gor (and a recent South Africa-set version of Othello). The music is by Julian Laxton (The Evil Below, Quiet Thunder) and the editor is Robert Simpson (no relation) who is assuredly not the same Robert Simpson who cut South Pacific and the 1939 Basil Rathbone Hound of the Baskervilles, despite what the IMDB says. Elaine Alexander and Kevin Brennan receive credit for ‘special effects make-up’; their company is called Max FX and is particularly highly regarded for their realistic ape suits, used in films such as Dunston Checks In.

I quite enjoyed Headhunter (or Head Hunter as a recent UK DVD release with completely misleading cover art incorrectly calls it). Not a classic, but a pleasant way to pass an hour and a half.