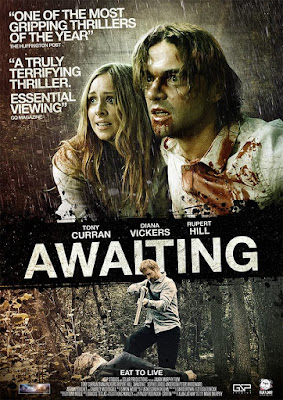 Awaiting is a brutal, powerful, agonising horror-thriller which offers a well-crafted take on some established themes. It is completely gripping and, though it slightly trips over its own feet right at the end, by then it’s been so good that you don’t really care.

Rupert Hill (Cameron from Family Affairs, Jamie from Corrie) is Jake, a young lawyer driving across Yorkshire who wakes to find he’s been in a car accident. Though not injured (beyond, presumably, a little light concussion), he has been taken in by a creepy father and daughter. Morris (Tony Curran - Vincent Van Gogh in Doctor Who -  giving an awesomely disturbing performance that you won’t soon forget) lives ten miles from the nearest town, earning a living in some unspecified way which we soon discover involves selling other people’s cars for scrap.

His 20-year-old, willowy daughter Lauren (former X-Factor contestant Diana Vickers) has not only never been kissed, she’s barely been further than the end of the lane. The duo have no landline and there is no mobile signal to be had so Jake is stuck there until the jovially aggressive Morris either drives him into town or gives him back his car keys. (That actually was the one major flaw in the plot. Ten miles is about three hour’s walk – even assuming no traffic passes which could provide a lift. It’s eminently manageable for any reasonably fit person. To be fair, by the time Jake realises that Morris is completely nutzoid, he’s no longer completely fit.) 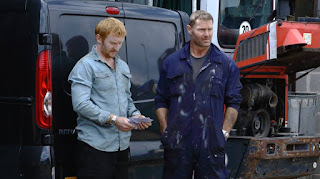 Morris will confirm every prejudice you hold about people from Yorkshire, a beautiful county inhabited by England’s second most unpleasant population (after Essex, obviously). But this isn’t the gleeful insanity found in something comparable on a basic level like Inbred. This is that disturbing, deeply uncomfortable, going-to-kill-you, just-a-joke-mate fake bonhomie that makes acquiescence the best strategy to avoid causing offence and possible conflict. Jake goes through a series of emotions and ideas as the situation becomes inexorably worse. Should he have just rudely walked out that first morning? Perhaps. But would Morris, a man often seen toting either an axe or a shotgun, have let him get to the end of the lane? Probably not.

The key to the film’s successful take on admittedly well-worn themes is Lauren, raised in almost complete isolation by her dad - though they have a television so she’s aware of the outside world. She just doesn’t realise that her situation is not normal. Her mother evidently left the scene quite a few years ago and now Lauren is the home-maker. But she is also a young woman, no longer Daddy’s little girl and, although there’s no suggestion of actual incest, her creepy replacement of her mother’s role is one of the first clues Jake has that all is not well. That, and the fact that the family are celebrating Christmas in September (an idiosyncrasy never fully explained, but which makes for some memorable imagery). 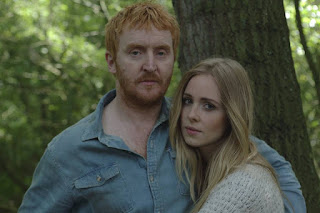 One of the things which most impresses about Mark Murphy’s second feature, which runs just over 90 minutes, is the economy of storytelling. Among the opening shots is a drawer full of watches, a single image which tells us what some other storytellers would take five minutes of expository dialogue to convey. A few moments later, when Lauren first sees the unconscious Jake, she asks her father, “But Daddy, what if he doesn’t like me?” “Then the pigs can have him,” replies Morris, leaving us in absolutely no doubt about what sort of man he is and what sort of set-up is going on here.

Lauren is attracted to Jake, which Jake is uncomfortable with until he realises how crazy her father is, at which point he resolves to not only escape but to take Lauren with him. And eventually, if he can’t escape, to at least show the daughter what her father is and does and thereby split the family asunder. Morris is a contemporary, rural Dr Frankenstein. He has created his daughter, but she has grown up and now wonders: did I request thee, Maker, from my clay to mould me? In his heart (he does have one, even if it’s withered and twisted), Morris always knew that his day would come, but his denial of its impending arrival is just one more facet of his general denial that what he is doing, both with Lauren and with unlucky passing travelers and their vehicles, is wrong. 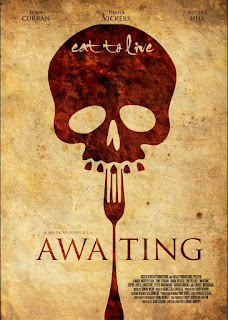 I mentioned that there’s a couple of mis-steps right at the end, which I’ll elaborate on without spoilers. After the story ends there is a final twist – and then another one. The second isn’t needed. It slightly devalues the effect of the first and, truth be told, is not only unnecessary but also somewhat clichéd (and doesn't, strictly speaking, make sense). The film would be stronger if it ended about 30 seconds earlier. The other problem, and it’s really unfortunate, is in the choice of music. One bloody sequence right near the end is shown in slow motion, without diegetic sound, accompanied by a hauntingly powerful song entitled ‘Outro’ by a French band called M83. If, like me, you have never heard of M83, you will nevertheless recognise this as ‘that song from the Persil advert’. The one where a little girl in a white dress gets splatted with different coloured paint. In slow motion. It means that when we should be thinking “Dear God, how can one person do that to another? How must it feel to receive treatment like that?” at the back of our head another voice is chipping in with “Those blood stains will come out, even at 40 degrees.”

I guess that in the long term, and internationally, this won’t matter. But it’s a real shame which comes perilously close to spoiling the ship for a ha’porth of tar.

Murphy’s script and direction are both whip-smart. Awesomely named cinematographer Hong Manley, whose credits include the Ken Russell segment of 1996 anthology Tales of Erotica, does a cracking job here, balancing out the interiors, the surrounding woodland and the occasional diversions into town so that the film remains atmospheric without ever tipping over into cartoon horror. Romanian editor Dragos Teglas also does sterling work; he’s another X-Factor alumnus, having served as editor on his home country’s version of that show. 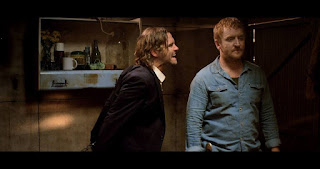 The excellent production design is courtesy of Tony Noble, who also worked on the silly Gnaw, a feature with a not dissimilar plot that serves only to highlight how good Awaiting is by contrast. He also designed Michael Bartlett’s feature Treehouse and Giles Alderson’s short Awake. Simon Webb, most of whose credits are TV light entertainment, composed the score. It’s a real shame that he didn’t provide an additional cue to replace the washing powder music. David Christopher Brown (Siren Song, Last Days on Mars) designed the gruesome make-up effects.

The small, effective supporting cast includes Peter Woodward (whose many voice credits include Batman: The Brave and the Bold, Megazone 23 and Postman Pat: The Movie) as a local plod, Sophie Lovell Anderson (stripper Candy in Stag Night of the Dead) as Jake’s girlfriend, Adrian Bouchet (The Seasoning House, Alien vs Predator and cracking fanfilm Predator: Dark Ages) as a scrap dealer, and Charley McDougall (Christmas Slay, Invasion of the Not Quite Dead) as a van driver. Some of the cast and crew also worked on Mark Murphy’s first feature The Crypt aka The Convent which remains frustratingly unreleased (outside of France). 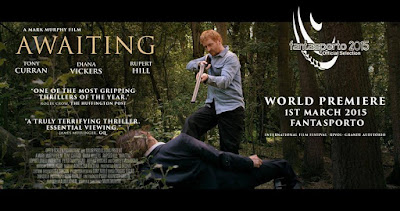 Awaiting was shot over four weeks near York in June/July 2014, test screened locally in September and premiered at Fantasporto in March 2015, with a second screening at the Horrorant Festival in Greece later that same month (where it picked up three awards). The UK DVD was released in September 2015, a few days after its UK premiere at Frightfest.