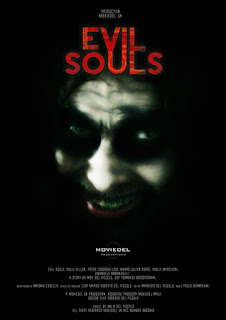 Evil Souls is as fine a slice of Anglo-Italian Satanic torture-porn as you are likely to encounter anywhere. The first act builds atmosphere, the second develops plot and character, and the last half-hour is an intensification which grips the viewer even as it occasionally pauses for some awesome visuals. I’m not entirely sure it makes a whole heap of sense – but when did Italian horror ever make much sense?

This is the second feature from brothers Roberto and Maurizio Del Piccolo, who previously brought us The Hounds. Shot in Italy in English, with an Anglo-Italian cast, it’s a production of their London-based company Moviedel with involvement from their Milan-based company Moviedel Italia. The IMDB lists this as a UK film but it’s clearly an international co-production.

Holli Dillon (who was in horror shorts Needles and Night of the Loving Dead) plays Jess Taylor, who comes home one evening to find her son missing and the baby-sitter very murdered indeed. Knocked unconscious, she comes around chained up in the lair of stone-cold nutjob Valentine, gloriously overacted by Peter Cosgrove (also in George Clarke’s Splash Area). With his long hair, short beard and foppish taste for 18th century frock-coats, Valentine sees himself as a disciple of the Marquis de Sade, although he actually looks like Sam Rockwell in the Hitchhiker’s Guide movie. 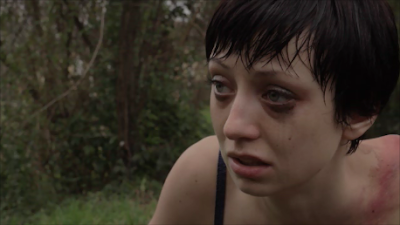 Also chained up, and wondering where her (somewhat delinquent) son has gone, is Susan Papworth (Paolo Maciadi). When Susan and Jess realise that they were childhood friends, they also realise that their captor is not a random sociopath but has singled them out for some reason connected with their past.

Meanwhile, two other childhood pals whose paths long ago diverged become reacquainted when Father Albert (Julian Boote: Dead Room, KillerSaurus) finds wasted whore Maddie (Lisa Holsappel-Marrs, also executive producer along with Roberto) on the steps of his church. Gradually, the pieces of the mystery start to fit together, although for every revelation there’s something else thrown into the mix that’s never explained (for example, Valentine and Jess both have visions of being in a vineyard). 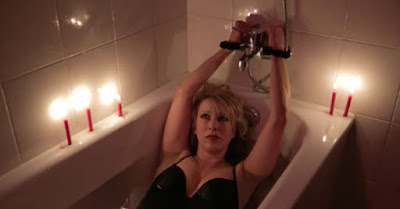 Boote’s priest is the cement binding the story together as he investigates the pasts of his former friends and uncovers some sort of demonic prophecy (or something) that relates to Susan’s and Jess’ sons (in some way). It was probably not necessary to tie this into historical figures of evil (including Hitler, of course); that angle gives the story no more gravitas and slightly cheapens what is otherwise a solidly crafted and undeniably impressive low-budget horror.

The film certainly doesn’t skimp on the gore with numerous characters subjected to genuinely horrific injuries, depicted by well executed make-up effects from Nicole Rossin and Serena Caiani. The whole thing is well-photographed by Tommaso Borgstrom who also shot The Hounds; many years ago he was camera assistant on Frankenstein Unbound! The screenplay is credited to Roberto based on a story by both brothers; Maurizio cut the picture. Paolo Bernardini provided the score which effectively supports the visual horrors. 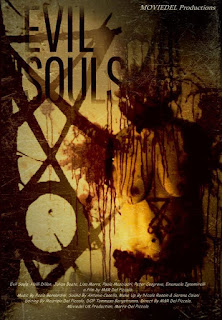 Stage actress Irina Lorandi makes a fine impression in her one brief scene as a prostitute; the cast also includes Catherine Brookes (The Hounds), Federico Rossi (who was in a 2012 post-apocalyptic feature called New Order), Sean James Sutton (Spidarlings) and Roberto di Stano (who is in an Italian Rocky Horror performance group!) as a homeless guy.

The picture was shot in the town of Muzzana del Turgnano (inbetween Udine and Trieste) in January 2014 (with pick-ups in October) and premiered at the Fantafestival in Rome in June 2015.

Is this British enough to count as part of the BHR? I think so, subject to further investigation (the poster calls it ‘A MovieDel UK Production. Associate Producer MovieDel Italy’). It seems to strike a good balance between the realism of the British Horror Revival and the fantasy of the Italian Horror Revival, and fans of either national cinema (or both) will enjoy it.