Battle of the Bone 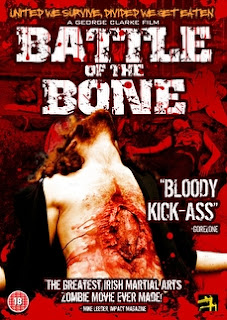 George Clarke’s first film Battle of the Bone was in my TBW pile for quite some time. I dug it out and watched it after receiving a screener of Clarke’s The Blood Harvest just ahead of its January 2016 release. Inbetween those two pictures are five other movies across a seven-year period. Clarke’s Yellow Fever Productions is clearly Northern Ireland’s number one film factory.

The province has given us some interesting movies over the years, from Enda Hughes’ brilliant but frustratingly unavailable The Eliminator (and his awesome short Flying Saucer Rock’n’Roll) to Kieran Majury’s Deadville. Via Freakdog (which had its moments), Ghost Machine (which was awful), Ditching (which was very curious) and WAZ (which was set in New York). The first horror shot in Northern Ireland was probably Naked Massacre, which I reviewed a couple of years ago for a magazine published by Factotum, the guys who made Ditching.

So anyway, I’ve finally watched Battle of the Bone and I can honestly say that I really enjoyed it. It’s smartly produced, technically very competent, uses its locations brilliantly and demonstrates above all that George Clarke has a masterful eye for composing the perfect shot. This is a film where you leave the cinema whistling the mise-en-scene. 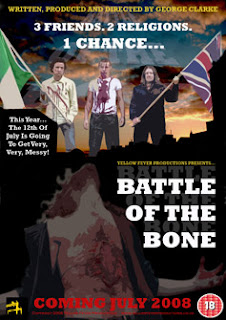 At heart it’s a straightforward, generic zombie film. The middle act is basically our three main characters running away from hordes of zombies. It’s adroitly directed and the pace never flags. If anything there’s a little too much of it and this 90-minute film could have lost a few minutes from the middle.

The first act is less successful. Each scene is very well done but they don’t seem to fit together in any coherent sense. We kick off with a young thief slipping through a skylight into a Government research lab and stealing a jar of pink pills which two infodump scientists have explained are some sort of booster drug for soldiers. This leads into a hugely impressive chase sequence as the burglar escapes a whole slew of security guards. Clarke uses the balconies and stairs of whatever building this is to great effect.

An effect which is slightly lessened when the second scene turns out to also be a chase, this time through some woodland. Two drug dealers chase a lad who I assume is the same one as we saw before. He seeks shelter in a rundown but still functioning mental hospital. Within the hospital is an orderly pushing a bearded guy in a wheelchair, a staring-eyed girl who stabs the wheelchair guy for no apparent reason, a diligent nurse and two blousy nurses (Vivian Jamison and Jo Lamont-Crawford, who were both in The Last Light: An Irish Ghost Story) who would rather mess about with a piano than actually attend to the patients.

It’s pretty much impossible to ascertain what is going on, or indeed where the zombie virus originates. If it has any connection with those pink drugs from the prologue, that passed me by. Individual scenes, as I mentioned, are fantastic. And the gradual build-up from a single zombie, as the violence and infection spreads around the building before bursting out and taking to the streets, is masterful. It’s just the lack of a coherent narrative that frustrates. 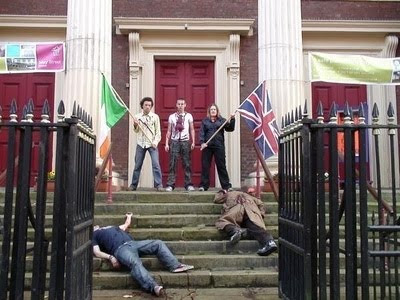 Our central characters are David (Shane Todd, now a successful stand-up comedian), Scott (Alan Crawford, also in The Blood Harvest and director of indie sci-fi feature The Truth About Tom, Dick and Harry) and Jill (Laura Jenkins). David helps Scott when he sees him in a fight with some low-lifes who are pinching his bicycle.  Together the two try to get across Belfast but it’s 12th July, the politically fractious day when Protestants insist on marching around with orange sashes in a way they know will piss off Catholics, and Catholics go out looking for Orangemen because they know it will annoy them and provide an excuse for some aggro.

Battle of the Bone (a pun of course on the Battle of the Boyne) does a great job of comparing the threat from the roving bands of mindless zombies with the threat from the roving bands of mindless thugs whose interest in politics extends no further than looking for an excuse to smash someone’s head in for being different. There’s a scene where a bunch of drunken revellers draped in Union Jacks are attacked and another where the zombies happen on part of a marching band in a hall, preparing to head out.

It should be stressed that there’s absolutely no political subtext or bias to Clarke’s film. It is made abundantly clear, not least though a well-written voice-over monologue near the start, that both sides are as bad as each other and neither represents the majority of the population who just want to live in peace. 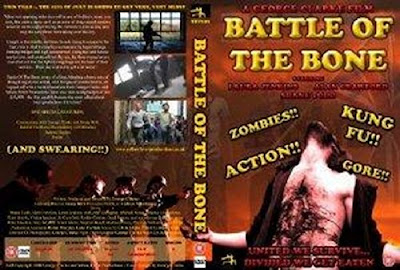 So there’s a confusing, well-made but fragmentary first act and a non-stop, energetic middle act as David’s girlfriend Jill turns up and joins the boys in some determined running away and occasional fighting back. Jill is a great character because Laura Jenkins is a well-built girl. Too many women in horror films are skinny wannabe models but Jenkins – and hence Jill – has some real meat on her bones. Which doesn’t stop her from delivering some powerful spinning kicks to both humans and zombies. It’s such a delight to see a real woman in a zombie film. What a shame that Jenkins doesn’t seem to have made anything else.

Having escaped the thugs, the trio are chased by zombies until we come to a climactic sequence which just blew me away. As David, Scott, Jill and some passing soldiers plunge into a melee with the undead horde, George Clarke fiddles with the colour and contrast (and speed) of his images and for five to ten minutes the film becomes an oil painting. It’s just beautiful. Movement and power are visualised without sacrificing character or relationship. I’ve never seen anything like it. Worth the price of admission alone and culminating in a powerful, magnificently choreographed shot of David grasping an Irish Tricolour and a Union Jack.

Just amazing stuff. The film as a whole is a joy to watch. The fight scenes are particularly adept, managing to be realistic without being brutal yet also slightly flamboyant without losing credibility. A fine balancing act which few directors, let alone first time directors, could pull off. 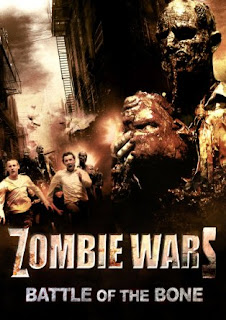 The cast includes Logan Bruce who had uncredited roles in Freakdog, Killing Bono and Keith Lemon: The Film; John Gallagher who was in Michael McNulty’s extraordinary feature Lost Claws; Graeme Livingstone (now earning a good living as a stand-in on Game of Thrones); and Lindsey Mitchell (who was in something called Zombie Formal Queen). As well as writing, producing and editing, George Clarke was also DP, fight arranger and assistant editor. He had actually planned to play David himself but instead concentrated on working behind the camera, although he is somewhere among the (300 or so!) zombies. Roddy Conlon and Joe Maxwell handled the special effects make-up.

Battle of the Bone premiered in October 2008 at the Freak Show Horror Film Festival in Orlando, where it won the Audience Choice Award. The UK DVD was released in January 2009 by Clarke’s own company. Five years later, Eagle One Media picked up the US rights and released an American disc in August 2014 retitled Zombie Wars: Battle of the Bone.

If George Clarke has gotten even better than this over the subsequent years, then The Blood Harvest should be an absolute belter.