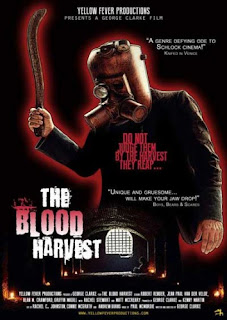 Two weeks ago I watched and reviewed Battle of the Bone, George Clarke’s debut feature from 2009. After Battle Clarke made The Knackery (more zombies), The Last Light: An Irish Ghost Story, Splash Area, Onus (which was a UK-Norwegian co-production, apparently) and most recently The Blood Harvest. Six features in eight years is a prodigious production rate. Clarke’s Yellow Fever Productions has built up its own fanbase, even if it remains largely outside of most horror fans’ awareness.

The Blood Harvest is a more confident and mature work, as one would expect from a more experienced film-maker. It’s set in Northern Ireland but, apart from a couple of lines of dialogue and a map on a wall, there’s nothing distinctively Northern Irish about the story or characters; with the most minor of tweaks this could have been set anywhere. In fact, the propensity for both working and suspended police to carry guns at all times suggests Clarke may have originally written this with a view to filming in in the USA. 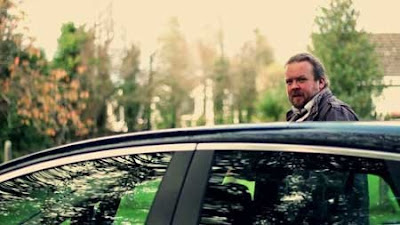 A serial killer is stalking the province. Bodies are turning up all over the place, distinctively disfigured: one eye scooped out and the Achilles tendons sliced. Robert Render (a Clarke regular who has also had bit parts in Ripper Street and The Frankenstein Chronicles) stars as Jack Chaplin, an experienced cop with some unlikely theories about who or what is responsible. After arguing with his superior, Chaplin is sacked but he keeps working on the case from home. His former partner Hatcher (Dutch actor Jean-Paul Van der Velde giving an agonisingly wooden performance) stays in contact with Chaplin while pursuing more traditional lines of enquiry.

We see several attacks on various victims which are as well-filmed as they are gruesome. For most of the running time this is a slick, nasty, bloody horror film structured around a gripping police procedural framework. The killer, who wears a crazy steampunk welder’s mask and drives a battered old 1950s car, is revealed to us but we don’t know who he is or why he’s doing this until the end. 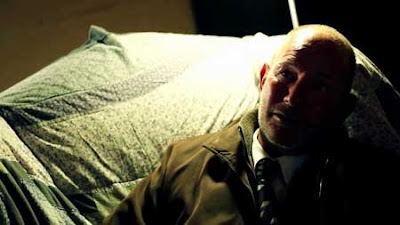 Ah yes, the end – that’s where the film comes apart. For the first two acts we’re dealing with a psycho and there are enough hints of vampirism to keep us wondering whether the explanation will be rational or supernatural. I always enjoy films with that sort of ambiguity. But the waveform has to collapse at some point in the third act. And collapse it well and truly does, in a talkie scene that tips the whole narrative over into something that is frankly rather silly.

[spoilers on] So it turns out that the two (yes, two) grunting, screaming psychos we’ve seen at work are the sons of Hatcher, who is actually an alien. They crash-landed on Earth 30 years ago, when the sons were babies. Over time they discovered that the nutrients they needed to survive could best be obtained by sticking a straw into the back of somebody’s eye-socket, and were particularly good if the victim was in a state of abject fear (it’s difficult to see what other state one could be in after a stranger gouges out one’s eye with a fork…). Unfortunately The Blood Harvest simply doesn’t make the leap successfully from gritty cop-horror to out-of-this-world scifi-horror. The transition is too jarring and the explanation too daft. Plus we’re left wondering what the aliens did in the 29 years before they suddenly started kidnapping people and forking out eyeballs. And how a man with no identity was able to become a senior police officer... [spoilers off] 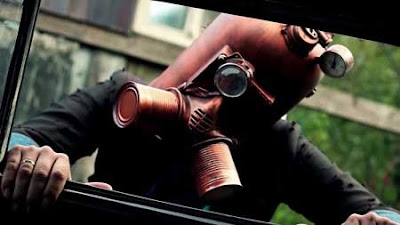 Even without the explanation of What’s Really Going On, the plot has some major holes. Not least how someone could commit 40 gruesome murders in less than a year without sparking the biggest man-hunt in UK history. And how the killer could so effectively evade justice when we can see that (a) he has serious mental problems and (b) he drives a really distinctive car. And groovy though that mask is, it’s never explained.

Don’t get me wrong, The Blood Harvest is a fun ride for horror fans and George Clarke continues to be one of the most consistently interesting horror film-makers in the UK. But you need to go into this film prepared for a preposterous revelation near the end. If you’ve ever seen WAZ, well… as Northern Ireland-shot cop movies about serial killers with a bizarre MO go, this ain’t WAZ, let’s put it that way. On the other hand, there are some absolutely cracking individual scenes, mostly based around the killer’s isolated farm and the attempts of two victims to escape. (One of these is Matt McCreary, who wowed the Britain’s Got Talent judges in 2015 with a free-running routine.) 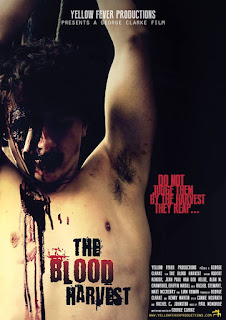 I guess I have to give props to George Clarke (and fellow producer Kenny Martin, who shares story credit) for ploughing a distinctive furrow. I’ve got no problem with the third act per se (talkie scene aside), rather it’s the first two which needed work as they don’t adequately prepare us for what is to come. If more inexplicable (but ultimately, narratively justifiable) things had happened in the first hour, we would better accept what is revealed in the final 30 minutes.

Filmed in October 2014, The Blood Harvest premiered at the Freak Show Horror Film Festival in Orlando one year later where it won Best SFX and Best Actor (for Render). Left Films picked up the movie and released it to UK DVD in January 2016, including a Making Of, bloopers and trailers. (There are also bloopers under the four minutes of end credits.) Clarke’s next project should be the utterly bonkers Zombie Schoolgirls, Attack!!, a teaser for which was shot back in March 2014.