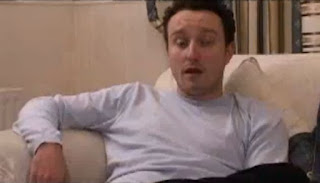 This was shot in 2010 and I have to assume that the online version, which is actually on the IMDB, was posted pretty shortly afterwards. In the intervening five years, so far as I can tell, not one soul has posted any sort of comment or mention of this film anywhere else on the internet. Apart from the IMDB page and the StarNow/CastingCallPro pages of the actors, there’s not a single reference to this anywhere. 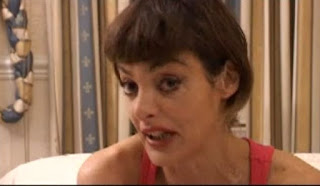 ‘Found footage’ conjures up images of all those dumb films like The Mirror and ‘untitled’ and The Unfolding where people set up webcams everywhere in an attempt to capture footage of a ghost. In this case, the film is presented as genuine video footage shot by the unnamed main character (David Bruce Taylor), but most of it is just interviews, shot as simple talking heads. In fact this is the most talking heads-heavy film I’ve ever seen, apart from Simon Rumley’s Strong Language.

The 90 minutes divides fairly neatly into three half-hours. In Act 1, we first meet Harry (Harry Lobek), an old mate of the interviewer who was always a hit with the ladies, and who gladly shares some tips on pulling technique. Intercut with this, after a bit, is a second interview with Ruby, a middle-aged Portuguese prostitute (Maria de Lima) with the gaunt look of a junkie. We don’t know how far apart these interviews were recorded. At around the half-hour mark, something really nasty and shocking comes along which makes us sit up and pay attention. 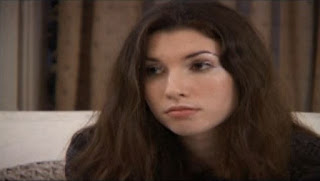 Act 2 introduces us to Avanka (Constance Cheloudiakoff), a French teenager who has been abused since she was five. She speaks no English so her conversation with the interviewer is translated back and forth by Ruby. This isn’t nearly as tedious or irritating as you might expect and in fact adds greatly to the verisimilitude of the movie. Our unnamed, increasingly manipulative interviewer wants to know about Avanka’s sexual history and sexual preferences, and wants to see her strip. It becomes clear that he is paying her for something.

Intercut with this is the final interviewee, Daniel (Darren Easton). A fascinating study in amorality, it’s clear that Daniel is a card-carrying sadist. Not a psycho, not crazy or manic. He’s utterly calm and laid back as he discusses the number of whores he has killed and his favourite methods of torturing them beforehand. As the film progresses, with Avanka’s pathetic vulnerability and naïve acquiescence becoming clearer at the same time that Daniel’s prosaic descriptions of torture techniques become more and more appalling, we can sense that this is building towards something. We’ve got an idea what. But we don’t know how far the action, and the film, will go. 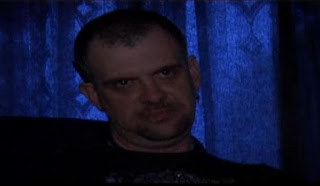 Thus we come to Act 3, upstairs in the ordinary suburban semi where this all takes place. Now we cut intermittently between two cameras: one fixed on the wall opposite a metal bed frame, one handheld by our interviewer friend. Under his instructions, Ruby dresses Avanka in a sexy outfit then Avanka is led upstairs and allows herself to be tied to the bed, gagged and blindfolded. Daniel – who has been told that the girl actually wants to die - begins his slow, subtle process of softening her up as the roving and static cameras looks on.

Where does this go? How far does it go? I’ll let you find out for yourself. There is narrative progression and some degree of resolution and you’ll finish the film with a head full of thoughts. There are a couple of faltering steps towards the end, admittedly. At one point it’s not clear what happens and it took me a moment (and a quick rewind) to realise that this related to Harry, whose involvement in the narrative had seemed somewhat oblique up to that point. And there is a slightly leaden speech from the unnamed interviewer about the difference between himself and Daniel which isn’t really necessary and sounds like the film trying to justify itself – which frankly it doesn’t need to do. 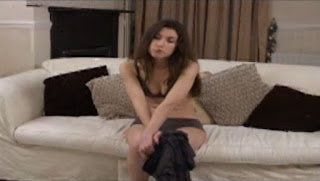 The film wraps up without any credits. There are just captions at the top and tail saying that what we are seeing is police evidence in an investigation into a planned murder. A carelessly missing apostrophe in the opening caption is annoying, but I’ll let it go.

The internet is full of micro-budget films about men torturing women, and most of them are utterly pathetic crap. So why does The Hell Experiment work? Well, a number of reasons. This isn’t a misogynist film. It’s a film about misogyny and sexism and patriarchy, thematically standing comparison with The House of Him and The Devil’s Vice. It's a film about what (some) men are capable of doing to (some) women. But it’s not about what such men do, it’s about who those men are and why they think they are entitled to do it.

It’s also a film about the women who allow this to happen, who let themselves become victims. It would be very easy to just dismiss Avanka as an idiot. What sort of person lets a stranger tie them to a bed and blindfold them? But it’s clear that Avanka and Ruby are both screwed up and have been their whole lives, because of the way they have been treated by the men around them: fathers and uncles and boyfriends. These women are victims before they even enter this house. 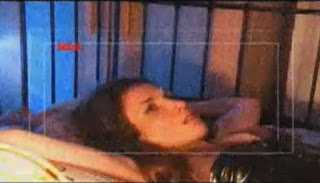 Frankly I’m a little surprised that The Hell Experiment is so completely unknown. It’s not like it’s badly made. I have absolutely no idea who Ricardo Benz is; there are several people of that name online but none who seem to have any connection to film-making. Nevertheless, his restrained direction gives enormous strength to this film, which cannily uses its minimal production values: limited cast, single location, no music.

It’s the cast that really make the movie the undiscovered gem that it is. All five are excellent, but special praise must be reserved for Cheloudiakoff. Playing the victim in a film like this, a micro-budget indie where the budget is not much more than that of the fictional video being made by the lead character, requires bravery and dedication. Benz cleverly frames his image so that we don’t see the pain inflicted upon Avanka, yet the actress conveys the terror, shame and desperation superbly, even when acting through gag and blindfold. The third act cannot have been easy for anyone involved. 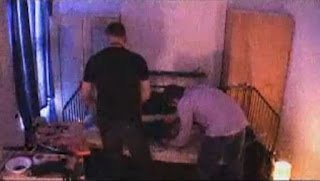 Darren Easton has played a policeman on numerous occasions including Silent Witness, Call the Midwife and the Dark Shadows movie, although most disturbingly on Crimewatch where he was cast as PC Keith Blakelock, the copper who was so awfully killed during the Brixton riots. David Bruce Taylor was Count Dracula himself in Sarah Steel’s 2010 short Job Interview with a Vampire and was also in a Paul TT Easter film. Harry Lobek mostly does theatre, including tours of War Horse and The Gruffalo’s Child. Maria de Lima has extensive experience in her native Portugal where she was nominated for that country’s version of a Gloden Globe (she was also a regular in the Portuguese version of Yes, Minister!). As for Constance Cheloudiakoff, she’s still acting, including a spell in LA, and also does comedy improv. While something like The Hell Experiment may not be an obvious choice for a showreel, her performance here as a vulnerable, pathetic, foolish, helpless victim - a woman who is weak because she has been systematically weakened - is a stunning piece of acting.

Although the film does not linger on the make-up effects, they are an integral part of the movie. Arabella Clarke was the make-up artist responsible and the results look suitably realistic, although the poor quality of the IMDB image hides the detail. Her other work includes a lot of theatre, music promos and TV ads, as well as the 2008 short Zombie Office. The only other name on the IMDB is editor Jenna Kay. 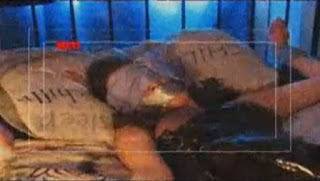 That then is the first ever published review of The Hell Experiment, after a mere half-decade. Don’t watch it if you’re looking for a fun movie, don’t watch it if you want gore and glee. But if you want 90 minutes of bleak, painful, depressing, compulsive insight into the lower reaches of the human condition, head over to the IMDB and take a look.