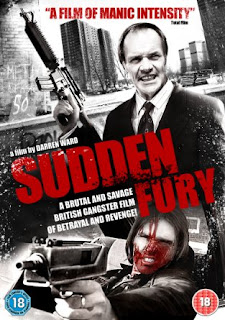 Sudden Fury is an action-packed, low-budget British gangster picture with effective, professional-looking action sequences and the sort of generic two-word title that Andy Sidaris has made a career out of. (Actually, although Sidaris has never made a Sudden Fury, the title was used for films in 1975 and 1993.)

The plot is not overly complicated. Crime boss A, Randall (Paul Murphy), has stolen £2.5 million of cocaine from crime boss B, Harris, but his goons left one of the guards alive so Harris knows who hit him. Randall and his lieutenant Jimmy (Andy Ranger) hire top hitman Mike Walker (Nick Rendell) to pretend to return the goods but really take out Harris’ men. Jimmy will then kill Walker and plant stuff on him so it looks like he was working for another gang entirely, thereby deflecting the heat from Randall and co. But things go awry when Walker survives - which comes as no great surprise, really, given that they have already said he’s the best hitman there is. Now Walker is on the run with the cocain, Randall wants him taken out, and the threat of all-out warfare between the two gangs looms ever closer. 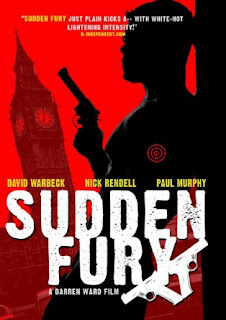 But before we meet Walker we have a prologue which, presumably in some attempt to out-pottymouth the opening scene of Four Weddings and a Funeral, crams the word ‘fuck’ 57 times into five minutes. Yes, I counted. There’s plenty of other swearing - as indeed there bleeding well should be in a gangster picture - but it is so heavily laid on with a trowel in the prologue that it distracts from the important scene-setting information conveyed by the small number of words that don’t begin with F.

Considering the low-budget, the acting’s not bad, at least among the main characters, but no-one’s going to win any Oscars and most of the smaller roles are completely wooden. The cast are basically a rep company for writer/director/producer Darren Ward, their only other credits being his other films such as Bitter Revenge and Nightmares. There’s something to be said for the convenience of casting your mates but at some point a film-maker with ambitions needs to start putting out casting calls and getting people who actually profess to be actors.

And there is one of those here, to be fair: none other than dear old David Warbeck in his final screen role. He plays a slightly effete, asthmatic sadist named Pike, who works for Harris and takes great delight in torturing two of Randall’s men with a blow-torch. He lifts his scenes - in fact the whole production - to a new level through his presence and must have been a great boost to the morale and confidence of cast and crew. Unfortunately, he gets plugged about half an hour in. 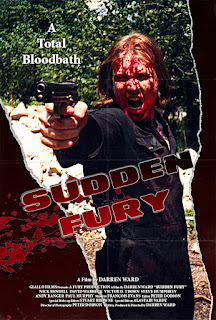 Which leads me to one of the main problems with the film: characters are introduced and then killed off and it’s very hard to work out who our protagonist and antagonist are; in other words, who should we be rooting for and why? There has to be at least one character with whom we sympathise (even if he has a dark side - that’s the depth that an anti-hero brings to a story) and we must want him to achieve something. He must have a quest, even if it’s only to survive. All that stuff you read about ‘the hero’s journey’ may sound like media studies nonsense but, when you analyse why some films work and some films don’t (or, as in this case, only work partially), you find it often comes down to the presence or absence of a hero’s journey.

You can have as many explosions and as much spurting blood as you want - Sudden Fury has stacks of both and it’s all very well done - but the key to a good film lies in the script and that, of course, is where so many micro-budget pictures fall down, even though a good script doesn’t cost any more than a bad one.

The protagonist and antagonist here would seem to be Walker and Randall, but the relationship is simply one of employer and employee for the first act, until Randall and Jimmy double-cross Walker, and then they separate completely into two plotlines. The hitman hides out in the house of a friend, Alex Renzie (also a hitman, I think) while he recovers from his wounds and it is only when he learns that Alex has been kidnapped and tortured in an effort to track him down that Walker becomes an active character, driving the plot in the final act. Which is about the time that an unseen assailant plugs Randall full of lead. 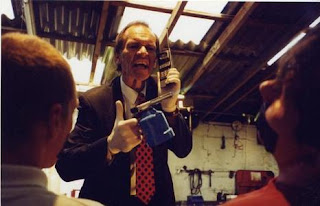 We never know enough about Walker - or indeed anyone - to really care what happens to whom. Randall may be an amoral bastard who takes a delight in killing two small children but our introduction to Walker sees him gratuitously killing Randall’s bodyguard when he arrives for a meeting with the crime lord, so why should we sympathise with him either? He does get one of the few brief scenes of tenderness, but as that involves shagging a prostitute that Alex has ordered for him as a treat, that also fails to ground our sympathy with Walker. Ultimately, we sympathise with him only because everyone else seems to be much worse. The one truly likeable character who is not a violent criminal (or at least, not depicted as such) is Alex, but he doesn’t have much screentime before being brutally tortured and killed by Randall’s men.

This torture is actually pointless because Randall has a watch on Alex’s house anyway and the goon on duty spots Walker answering the door to the hooker. Unfortunately this was shot in 1997-98 when mobile phones were not ubiquitous, the few on display here being the size of a small house brick, so there’s no way to get the message back. (We also see Randall reading a copy of the now defunct newspaper Today - oh, it all seems so long ago...) 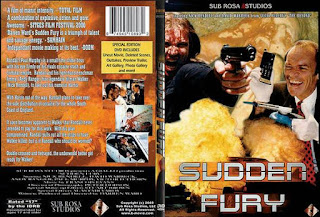 Alex’s torturer is a moustachioed South Africa named Lennox (Victor D Thorn, also in Chris Barfoot’s sci-fi shorts Phoenix and Helix) who seems to be in charge of the various gun-toting goons guarding an old warehouse which is, we assume, Harris’ (now Randall’s) cocaine factory. When Walker comes looking for his friend, he despatches a number of these before teaming up briefly with a character whose appearance is a surprise. This volte-face, and the instant trust which Walker places in his new accomplice, is narratively convenient but doesn’t make any sense at all and the other person is killed fairly swiftly.

This leaves the climax of the film as a one-on-one battle to the death between Walker and Lennox, briefly interrupted by a flashback to a time when they worked together. Dressed in camouflage gear, it’s not clear whether they are meant to be soldiers or mercenaries, nor where they are (it’s clearly deciduous English woodland, but I got the impression we were meant to be in Africa). Anyway, this reveals a long-standing enmity between the two men but it’s too little too late. 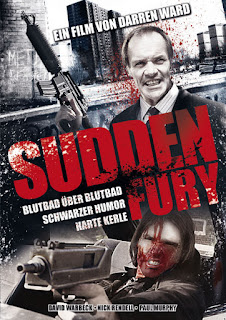 The climax is very exciting indeed, let’s not take that away from Sudden Fury, but our antagonist has switched arbitrarily from crime boss Randall to Lennox, who is nothing but a chief thug and whom we only met halfway through the picture. It’s simply unsatisfying to have the main threat dead elsewhere by another’s hand while our hero battles someone who up to now has been a minor character. What we want to see, after an hour and a half of this stuff, is the last two men standing: Walker, with nothing left to lose, and Randall, the wine-drinking sophisticate reduced to getting his hands dirty. But it is not to be.

Which is a shame because the climactic battle, in fact all the action sequences, are very, very well-staged. Pyrotechnics are deployed well, exciting without being gratuitous, while bodies and (importantly) the walls behind them are riddled with bullets. In terms of what would literally be ‘bang for your buck’ if this had been paid for in US dollars, Ward and his team have put together terrific action scenes that are violent, tense, bloody and exciting, without overstepping the mark. No kickboxing here, thank Christ! Ward’s direction combined with the two-for-one cinematography and editing of Peter Dobson (Sanitarium, Hellbreeder, Darkhunters) shows some of the Hollywood big boys how to stage a fight scene so that the audience is drawn in without losing track at any time of who is where and what they’re doing. 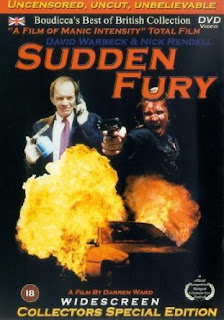 One final criticism of the script is that never, at any point, does any character make any reference to the police. Bodies pile up, entire families are wiped out in blood-splattered attacks and no-one seems at all bothered about what PC Plod might be doing to track down those responsible.

To sum up, despite excellent effects and professional-looking action sequences, Sudden Fury has a plot structure which doesn’t stand up, extremely limited characterisation and dialogue which boasts lots of swearing but no wit and no snappy, quotable ‘zinger’ lines. But does any of that matter to the intended audience? I suspect not. This is a film for those DTV movie fans whose idea of ninety minutes well spent is watching Steven Seagal’s unconvincing body double cracking skulls at least twice in every reel. In that respect, it succeeds and DVD releases in both the USA (through Sub Rosa) and UK (through Boudicca) are testament to that. But it is still a shame that Sudden Fury couldn’t find more time for characters and plot, in either the development process or, indeed, on the actual screen.