This second interview with my old mate Tony Luke was conducted by email in June 2003, presumably for SFX. I’m posting it here now, along with our previous interview, as a tribute to Tony, a true Maverick and  good pal, who passed away last month. 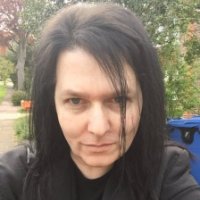 “Apart from Dominator himself, and the various designs he's been portrayed in, the rock aspect has always been a mainstay... The Metal Hammer version was very much a jokey thing, as it was very difficult to tell an ongoing story in half a page every two weeks, so we were well pleased when Kodansha offered us a chunk of Comic Afternoon to play around with every month - in colour! For the Japanese version, we made a lot of punk references in the script and the art - there's a lot of Clash and Sex Pistols on the karaoke machines out there - and introduced the other three demons: Extricator, Decimator and Lady Violator. The tone was semi-serious, but was offset by the comedy provided by Extricator and Decimator. A couple of those characters’ manga sequences were adapted verbatim for the movie.”

How long has it taken you, from initial idea to finished film, to make the Dominator movie?
“It became viable for us to make Dominator ourselves when the prices of computers and software came crashing down at the end of the ‘90s… until then, we’d looked at doing a stop-motion version in the Archangel Thunderbird style, but I didn’t fancy going through the stress of having to deal with a lot of weirdo freelance model-makers again, and thus CGI became the obvious vehicle. The Sci-Fi Channel approved co-production in summer 2000, Alan delivered the following November, which was followed by the storyboarding and character construction, and we began actual production in November 2001, with completion in April 2003. Renga Media’s hardware expanded exponentially to cope with the vast amount of raw data the project produced… Upon completion, we discovered that Dominator was actually the UK’s first-ever full-length CGI animated feature… not bad for a start-up company.” 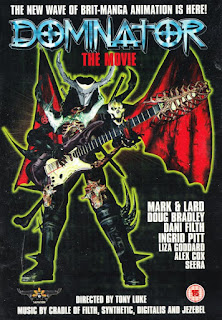 Give me some technical info on what hardware and software you used to make this all-CGI feature.
“Renga’s an all-Mac setup, though we do use PCs from time to time if the occasion demands; that’s simply because the Mac has a more stable OS than Windoze, and the hardware’s far less likely to cause problems. Indeed, most technical problems we encounter we fix ourselves… When we began Dominator, we had to use packages like Poser and Bryce simply because our lack of funds dictated that we use the cheaper packages (Maya still cost about £10k when we started production, though it’s now down to a fraction of that…). We pushed those packages to their limits, and beyond. Indeed, we made a deal about how lack of funds shouldn’t stop anyone from getting started – there’s always a way, even if you are on a low budget. Editing and post was done on Macs running Aftereffects and Final Cut Pro, top packages that have seen a lot of Hollywood exposure lately. In the end, we were running two edit suites and a rack of other Macs networked into a render farm. We’ll be doubling our capacity for the next film.”

What sort of collaborative structure exists between you, Doug Bradley, Alan Grant and Yasushi Nirasawa?
“Renga Media was set up to look after and protect the projects we four have developed together, although we’re now taking on outside projects, like music videos. After Kodansha ran Dominator, Alan and I were approached by numerous Hollywood outfits to buy the rights, but these deals always involved the transfer of all rights, including moral, to the company in question; if we’d gone down that route, we might as well have consigned Dominator to the bin for all the return we would have seen. So we waited until the technology was cheap enough to allow us to do it ourselves.

"In 1998, we gave Nirasawa-san a one-third share of our copyright in return for his character revamps. A wonderful guy, he’ll be back for Dominator 2… As far as Dominator’s concerned, the rights belong to myself, Alan and Nirasawa-san, with Renga (co-owned by myself and business entrepeneur Jim Brathwaite) licensed to handle and explore the property… Doug acted as co-producer on the movie, and is also a shareholder in Renga; he’s been an invaluable asset to everything we’ve set out to do, and deserves far more recognition than he currently receives. We’ll be doing a lot with him in the future.” 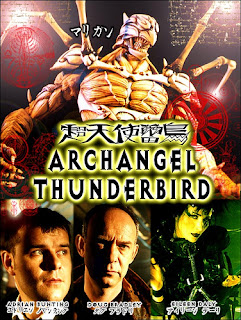 How did you go about gathering your eclectic voice cast?
“It was paramount that we had some ‘name’ artists as well as a cast capable of delivering the dialogue in as natural a way possible… no dodgy Hanna-Barbera voices here! Dani Filth became involved as we’d approached Cradle of Filth way back in early 2000 to use their music on the movie, and we wanted an established rock star to portray Dominator himself. Dani played him somewhere between Lobo and Zodiac Mindwarp. Cradle went on to supply ther track ‘Carrion’ for the title sequence, and we’ve now got a really good ongoing relationship with them. They’re destined for great things. Doug was involved in Dominator right from the start, when it became apparent that it was beyond our then means to make further Archangel Thunderbirds without losing all the rights and creative control, and he suggested Ingrid Pitt to play Lady Violator in her demonic form. Ingrid’s a great laugh and, like Doug, a real professional.

"Alex Cox I knew from when we’d co-presented BBC2’s Godzilla documentary, and he jumped at the chance to play the villainous Tory minister Bishop. He’s got an amazing voice, he really should do more animated work. Sci-Fi’s Seera came on board as Hellkatt after I asked her whilst she was interviewing me for her show. Robert Rankin lives around the corner, and after hearing him give a reading, I asked him to do the narration – we had a lot of fun doing that session, even if he does think he sounds like a pervert. Liza Goddard’s a distant relative, so it was relatively easy to get her involved – she’d done a voice for a short 8mm movie I made 20 years ago whilst at college. How things change. 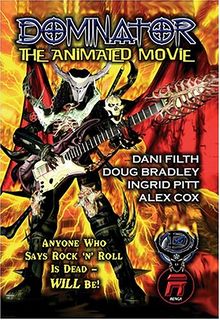 "The most fun we had was recording Mark and Lard – they’d agreed to do Extricator and Decimator very early on, and I wanted an established comedy duo for those characters. Somehow, two pissed-up Mancunian demons trashing southerners really works in the animation medium. The session itself was hysterical. Doug handled the direction, as he did on most of the other sessions, but we found that they were at their best when they were just being themselves and ad-libbing like crazy… we ended up with quality comedy there. In the future, I’d like to get Robert Powell in to play the voice of God – after playing Jesus, there’s only one up you can go from there, I guess – and some more American voice artists. I’d also like a couple of name Japanese actors to be involved in Dominator 2, and we’re in active talks with… ah, you’ll find out in due course!”

Where next for Renga Media?
“We’ve got a fair bit on – a video for soundtrack contributors Digitalis, an ad for US horror convention HorrorFind in August this year featuring Doug, an animated series for cable called Goffz (think The Mission living in South Park), and Dominator 2 later this year. We’ll also be doing a 10-minute animated crossover with a DC Comics character, which will be available for download only. We’re also going into merchandising with Dominator T-shirts, with more to come. We’ve only just begun…“

Sadly, there was no Dominator 2 – and now there never will be. Tony continued to work on other projects but eventually his long-term health problems overcame him and he left us on 18th February 2016. RIP Tony, thanks for everything.
Posted by MJ Simpson at 18:52