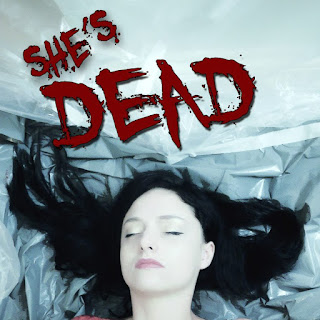 This hour-long blackly comic horror is well-made and entertaining but doesn’t quite deliver what it promises.

The first act’s great. Writer/producer Alexander Lewis is Ben, a young man who has woken up after a night on the tiles to find an unknown, dead chick next to him. After wrapping the whole room in plastic sheeting and an ineffectual attempt to remove her arm with a saw, he has called in a fixer, Mr Clean (Julian Seager: Welcome to Essex, Welcome to Curiosity, Scareycrows) to help him dispose of the body before his parents get home. Seager plays Mr Clean as a pragmatic professional while Ben is understandably out of his depth and these scenes work well. 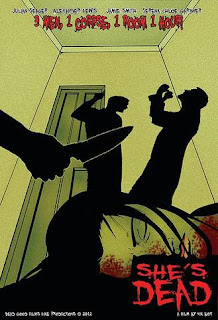 Act two introduces us to Barry (Jamie Smith), an idiot friend of Ben’s who was the first person he called but initially wasn’t able to help. Mr Clean can see that Barry is more problem than he’s worth but once he has seen the body, he’s part of the situation. There’s quite a long scene of Barry, who obviously doesn’t get to meet many women, alone with the corpse. This monologue is drawn-out and goes on too long. More problematically, after Ben and Mr Clean return and then a short conversation between the three, the other two leave again and we get basically a repeat of what we’ve just seen.

And then in the third act this turns into a completely different film. I won’t tell you the twist and I won’t include the tag on this review that would give it away. You may guess it. It’s more entertaining than the overlong ‘Barry the perv’ middle act but it’s not what we’re expecting. What we’re expecting – well, I was; you won’t be after reading this review – was development of that first act’s black comedy. Attempts at resolution frustrated; additional complications arising; character conflict as the clock ticks down. But there's none of that.

There is literally a ticking clock in this film as occasional captions tell us not only the time but also how long till Ben’s parents arrive. Despite this, despite having less than an hour to dismember the corpse, dispose of the pieces, take down all the plastic and restore the house to its normal state, none of our three characters seem to be in a hurry. The film’s pace could reasonably be described as ‘placid’. One would expect Ben to become increasingly frantic but he really doesn’t seem bothered (which is sort of explained at the end, but not in a way that actually justifies his actions and attitude). 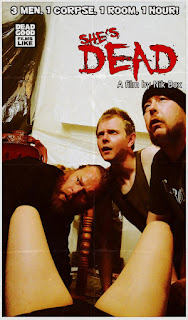 Having said that, I did really dig the minimalist approach of the film which is mostly filmed in quite long, static shots. A picture this talkie would normally be all shot/reverse-shot but a deliberate, appropriate and clever decision has been made here, so that on the one or two occasions when we do cut to a close-up from a different angle, it feels odd and uncomfortable. Plus it has just four actors and was shot in four days in a single location. Effective use of minimal resources.

There are a couple of musical sequences as the camera pans up and down the underwear-clad body. Serena Chloe Gardner (Banjo) does a magnificent job of remaining completely still – and unresponsive when being groped by Barry. These musical interludes do rather seem like padding to reach a one-hour running time but they also break up the otherwise largely talkie scenes so I didn’t mind them. And the justification is that these happen when the living characters are out of the room, allowing the story to unfold in real time – which brings us back to the ticking clock. 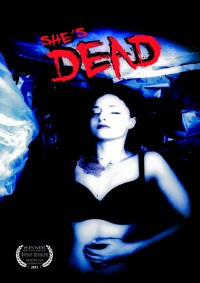 She’s Dead is the first film work I have watched from Dead Good Films Like, a production company which Nik Box set up in 2004. So far as I can tell this has no connection with The Dead Good Film Company which was Adam Trotman’s and Thomas Lawes’ prodco in the late ‘90s, responsible for such classics as Rhino Bitch and Demagogue (the latter of which got me my first ever credit in Fangoria).

Over the years DGFL have made a number of shorts and sub-feature-length films with exploitation titles like Mr Rape’s First Date and Dracula vs the Ninja on the Moon. She’s Dead was released on DVD in January 2014 (available through the DGFL website) also given a legitimate US release the following month as part of a four-film, two-disc set. Under the umbrella title 21st Century Grindhouse, this also included Wrath of the Violent Vicar, Terror of the Blood Demon and Brutal Jesus and the House of Wasted Youth. The film screened at the Movie Days/Dark Zone festival in 2013 where it picked up an award for Best English Film.