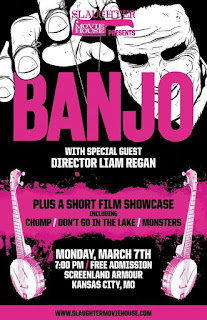 Banjo is Liam Regan’s love letter to Troma. The main character wears a Stuck on You T-shirt; there’s a clip from Tromeo and Juliet on TV; and Uncle Lloydy himself has a cameo as a doctor. It also features more penis damage than probably any film since John Wayne Bobbit Uncut. In particular there’s a scene at about 27 minutes which made me cover my eyes and yell “Dear God no!” loud enough for my son to hear me right at the other end of Simpson Manor. What is more, just when you think it’s all over, Regan edits in a brief flashback to this later in the movie.

James Hamer-Morton (Dead Love) delivers a fine lead performance as Peltzer Arbuckle, saddled with an inferiority complex and a shit job in the accounts department of a paper manufacturing company. Fan fave Dani Thompson (Monitor, Three’s a Shroud, Serial Kaller) is Deetz Montgomery, his hot but horrid girlfriend who is PA to Peltzer’s sadistic bully of a boss, Sawyer (Vito Trigo). Peltzer has the desk next to his cute ex Melissa Lee Ray (Serena Chloe Gardner – the corpse in She’s Dead) who is now dating swaggering American knob Stiles Rembrandt (Clay von Carlowitz). Continuing the Troma connections, Carlowitz and Trigo were both in Return to Nuke ‘Em High 1 and 2, on which Regan worked as a production assistant. 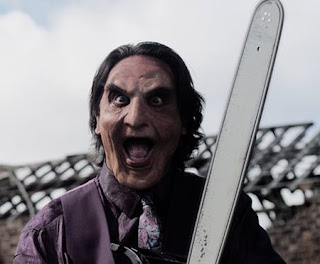 When Peltzer stops taking his medication, he finds himself revisited by Ronnie, his childhood imaginary friend (Damian Morter, director of The Eschatrilogy, Bicycle Day and The Day After Dark, who was also DP and editor on this film). The basic premise of a sad sack forced into asserting himself by a demonic-looking, impishly amoral, invisible companion is superficially similar to Peter Anthony Farren’s obscure 2012 BHR entry Kenneth but Regan’s film works a lot better than Farren’s, because both Peltzer and Ronnie are more interesting characters than Kenneth and his annoying ‘ear-goblin’.

Although no-one else can see Ronnie, he is able to interact with the real world – pushing a trolley full of cakes or setting a deadly trap on the company sports day – and no-one seems bothered by that. Rather than trying to justify or explain such inconsistencies, Regan simply scoots over them with glorious abandon and the film is all the better for that. Or perhaps this is all in Peltzer’s head anyway. 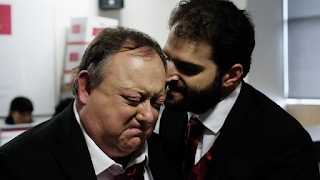 There’s an enormous amount of both horror and comedy to enjoy in Banjo which has deservedly been a big hit at festivals including the 2015 Frightfest and the 2016 Horror-on-Sea. Plus there are assorted little nods to some of Liam Regan’s favourite horror movies and movie-makers scattered within the film (it all takes place in a town called Henenlotter!). The corporate setting puts this into a subgenre with the likes of Lock In and Fired although it’s thematically and stylistically a very different film to both of those. The humour throughout is both scatological and sexual, with no concern about such arbitrary concepts as ‘good taste’. That said, the story is more character-based – hence the politically incorrect humour is less full-on – than something like Zombie Women of Satan. 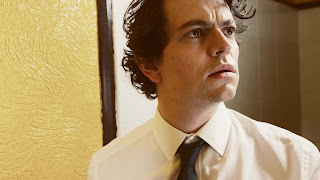 Banjo is an expansion/remake of Liam’s 14-minute 2012 short Banjo: Confessions of Peltzer which can be found on YouTube with a bit of diligent searching. The short featured Liam Perrons as Peltzer (in a wheelchair), Louise Stevenson as Deetz, Mike Crone as Sawyer and Oliver Kenny as Ronnie. In lieu of make-up, Kenny wore a green-painted Ronald Reagan mask (hence the name). This was included in the Self Induced Nightmares multi-director anthology.

Banjo is a tasteless, outrageous hoot from start to finish. It’s great that someone in the UK is carrying the Tromatic torch so proudly.