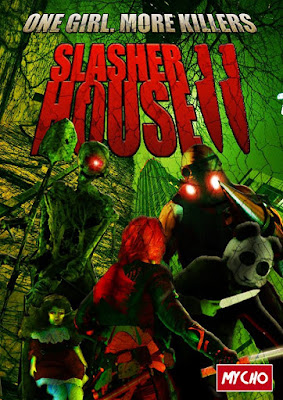 The story so far. In 2010 the Mycho Pictures team of writer-director MJ Dixon and producer Anna McCarthy made Slasher House, in which Red (Eleanor James) and Nathan (Adam Dillon) woke up in a big building with three over-the-top serial killers. I called it “enjoyably non-formulaic and surprisingly watchable despite its faults.”

A few months after Slasher House was released in 2013, Anna and Mike made Legacy of Thorn, a spin-off prequel about one of those serial killers. Cheerfully homaging Friday the 13th, it is “Impressive, ambitious and largely successful, not to mention unashamedly entertaining for all gorehounds” apparently.

Then they shot two more prequels set within the same ‘Mycho Cinematic Universe’: Hollower and Cleaver: Rise of the Killer Clown. The former concentrates on the first picture’s Nathan and is more restrained than the previous films. I declared it to be “Stylish, spooky, slick and seriously disturbing in its finale.” The latter is an homage to Halloween, based around another of the bad guys from Slasher House. “It's certainly a cut above what the basic premise - nutter dressed as clown stalks town on Halloween - would suggest,” opined top film critic MJ Simpson.

Which brings us to Slasher House II. 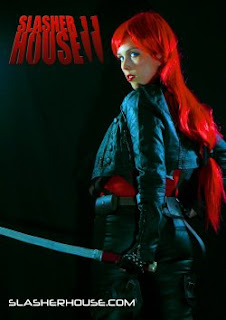 This is the further adventures of Red, now called Red Angel and played by Francesca Louise White (who is absolutely terrific), Ella James having long since retired from the acting game. It’s the same character but a different role, Red Angel being very much a kick-ass protagonist hunting down serial killers rather than a victim fighting back.

She is assisted in this endeavour by cute nerdette Luse (Sophie Portman) who fulfils the sort of Nick Fury/Q/Alfred role of providing both technical and logistical support. And also by Amber (model/actress/photographer/tattooist Luna Wolf), a stripper who is simultaneously rescued and made homeless by Red Angel. Rescued when a psycho in a papier-mache panda mask wanders into the club and slaughters everyone else while Amber is out the back, before being brutally despatched by Red. Made homeless because she was sleeping in a room above the club in a building which Red torches to destroy any evidence of what happened there.

In a move typical of the hyper-reality of the Mycho universe, which makes these films almost like live-action anime, Amber’s large yellow wig is as cartoonish as Red’s scarlet barnet. I make the anime comparison deliberately, not in a pejorative sense (long-term readers may know that I love Japanese films and love animated films but hate Japanese animated films) but because Slasher House II does display an overt Japanese influence. There’s some sort of secret organisation, with squads of black-clad, gas-mask-wearing goons armed with hi-tech sci-fi guns. There’s Red Angel herself, adept in all manner of armed and unarmed combat. She and her two comrades all display that kick-ass coquette-ishness so endemic in Japanese live-action movies. On the one hand, they are designed very much for the male gaze but on the other they are presented as very much capable of holding their own against typically weak, foolish male opponents.  They are simultaneously dominant and submissive. I could write a thesis on this bollocks. 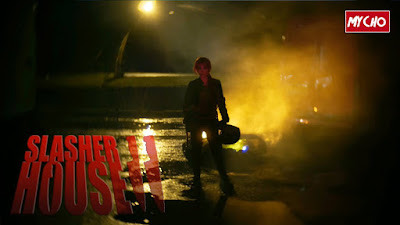 More than the characters and character design, what feels Japanese here is the sense that there is all sorts of stuff going on outside of normality and that we are (the four previous Mycho films notwithstanding) thrown into the situation without preamble. Japanese horror/sci-fi movies often don’t feel the need to explain situations or characters or organisations or histories: they just are. Here also, things just are.

The other aspect of Slasher House II which jumped out at me is that in some ways this is more of an action film than a horror movie, prioritising fights over scares. In fact, let’s be honest, although the whole focus of the Mycho Cinematic Universe is ostensibly ‘serial killers’, really these are supervillains, aren’t they? One of the bad guys here has a drill for a hand, another is an eight-foot-tall living skeleton. They may well have murdered a considerable number of people, but so has the Joker.

As with previous Mycho movies, the colour palette here is pretty extreme: mostly reds and greens with blue for some exterior graveyard scenes. The effects, both digital and physical, are pretty good and the cast give their all with varying levels of success (several were also in Legacy of Thorn, some have Philip Gardiner pictures on their CV).

The one thing I haven’t touched on, you may have spotted, is the story. And that’s where Slasher House II falls down somewhat, alas, in that I really couldn’t follow what was going on. Legacy of Thorn was set in two different times, exactly four years apart, and Dixon took the bold step of telling one of his stories backwards, showing us 2012 scenes in chronological order interspersed with 2008 scenes in reverse chronological order. It worked. 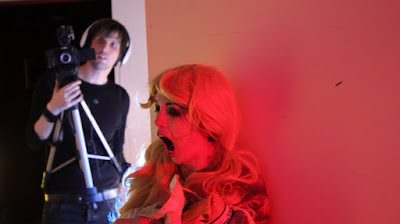 This movie attempts something similar but without the same success. It became apparent about halfway through that we were jumping around in time but it’s not clear how or why. We’re following the same characters, dressed and looking the same way, so it’s only sudden non-sequiturs and jarring disconnects between consecutive scenes that clue us in to the fact that we’re not following a single story through its beginning, middle and end. The plot is all something to do with some shadowy organisation collecting serial killers and Red’s attempt to save a hospitalised, disabled girl named Molly (Tiana Rogers, also in Cleaver) but what happens between the nightclub scene and the ‘rescuing Molly’ scene is confusing and unclear. Each individual bit of the film is fine and very enjoyable: some foolish kids get slaughtered in a graveyard by the skeleton; Amber rescues Red when the latter is left unconscious in the street; Red and Luse discuss matters in a coffee bar; and a whole bunch of other scenes I don’t want to describe because I can’t tell if they would be spoilers or not so I’m erring on the side of caution. I did like the epilogue, which works very well, and that’s all I’ll say on that.

I enjoyed Slasher House II as a viewing experience, just as I have enjoyed all of its predecessors. It’s tremendous fun, wildly imaginative and startlingly confidant. I just think it may be a tad over-confidant. I could probably follow the plot if I watched it again (with a notebook) but I very rarely watch films twice, simply because of my always-tottering TBW pile. And while some films do improve with a second viewing, you shouldn’t need to repeat the experience to ‘get’ the movie. 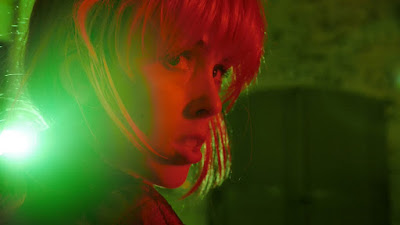 MJ assures me that he has the whole Mycho Universe mapped out - and I believe him. But I think it's time now to start posting that mapping online so that viewers can work out where we stand. I've been lucky enough to see all five films in order but, on account of watching many dozens of other films in among them, I can't recall enough details of previous Mycho features to spot where, when and how they all connect. My reviews, though long and detailed, generally avoid that sort of spoilery detail. So come on, Mike and Anna. A flow chart now, if you please.

All the above notwithstanding, Mycho’s journey towards global cinematic domination continues unabated (comic books are also in the works!). Mask of Thorn should be next, a prequel to Legacy. This is touted as Mycho’s seventh feature because MJ and Anna still have, somewhere on their hard drive, the semi-legendary Creepsville. Shot before Slasher House, this is part of the same universe. Mike Dixon told me recently that he’d like to get it out there eventually because he’s actually rather proud of it. That long-awaited 'meeting of the MJs' occurred at the inaugural Grindhouse Planet Film Festival in Leicester where the programme included Slaypril Fools Day V: The Last Laugh, an extended ten-minute spoof trailer for a series of horror films which can be heard on a TV in one of the SH2 scenes. Also currently doing the festival rounds as a short is If You Were Here, the Mycho contribution to as-yet-unreleased anthology Blaze of Gory. 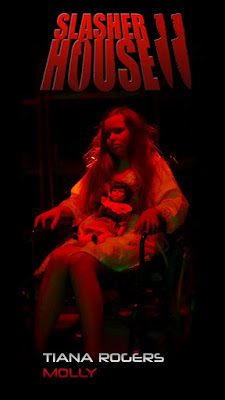 You can actually watch the Slaypril Fools Day V short in the comfort of your own home if you have a VHS player and 25 dollars to spare as it is included in the Tony Newton-curated anthology Grindsploitation: The Movie, along with segments directed by Jason Impey (who appears briefly in SH2 as a barman), Andy Edwards (Ibiza Undead), Dan Brownlie (Serial Kaller), Donald Farmer (Chainsaw Cheerleaders), Caleb Emerson (Die You Zombie Bastards!), Todd Sheets (Prehistoric Bimbos in Armageddon City), Robert Tinnell (Frankenstein and Me) and many, many more.

Shot intermittently between November 2015 and July 2016 with the help of Indiegogo funding, Slasher House II had a cast and screw screening in October 2016 and willenta haven premieredlish (depending on when you read this) at Horror-on-Sea in January 2017. No-one hits the target bull's eye every time, but the great thing about Mycho productions is that, even when they don't work completely, they're still enormously watchable and very enjoyable.