I had the pleasure of interviewing the great Todd Jensen on the set of Rampage (aka Breeders aka Deadly Instinct), a British B-movie which was shot on the Isle of Man in January 1997, in which he starred alongside Samantha Janus.

How did you get cast in Rampage?
“I was originally going to be in this movie. When they first came up with it, they offered me the lead. Then they were going to shoot in Wales. I guess the Welsh were going to put in some money. But in order to do that, they had to have a Welsh cast.”

They've got an entirely Welsh crew instead.
“Yeah, exactly. Then all of a sudden they changed it again, and the Welsh money fell out or something happened, so they ended up coming to the Isle of Man. So they phoned me and said, 'Do you still want to do it?' and I said, 'Yeah. I'm free in January.'”

Are you based in Britain or in America?
“I'm based in LA, but I'm hoping to spend some time in London on a regular basis and hopefully do some more work over here. My sister lives over here. She lives in Birmingham. She'll be here on Sunday; she's coming onto the set. She's met Paul and Liz before.” 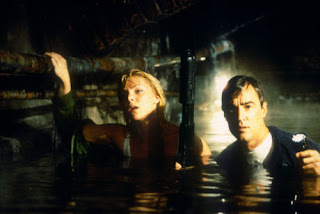 Is there much difference between a British production and an American production?
“Um, no actually. It's pretty much the same wherever you are. Very knowledgeable people, great technicians. A great crew; this is probably the best crew I've ever worked with, as far as personalities and fun and hardworking. Everybody's been having a really good time.”

This is what is coming across; that everybody's enjoying themselves.
“Yes. That's a real positive thing. Especially something like this where it's cold. It's good that everybody keeps a positive attitude. And that's a rare thing. That everybody gets along and has fun and can laugh. That doesn't normally happen on film sets!”

Are you enjoying doing the action sequences?
“Yes, that's a lot of fun. Action is always fun.” 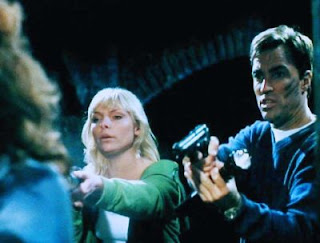 Have you had any training on that side of things?
“I've done a lot. I've done about twenty films, and about 50% of them - maybe a little more than that - have been action films. Like the three films that are coming out this year. One's called Orion's Key, which they're renaming, I think they're calling it Alien Chaser, which is a sci-fi film. Do you know the Shadowchaser movies? Well, this is Shadowchaser IV, but they're going to call it Alien Chaser. That's a sci-fi kind of thing. So I'm the lead in that. Then there's another film called Operation Delta Force which is an action film, strictly, with Jeff Fahey and Ernie Hudson and myself and Frank, the guy who's in Alien Chaser with me, the man from the Shadowchaser films. So those'll be coming out very, very soon. There's a film called Warhead that'll be coming out soon, an action film.”

Do you like doing the cyborg and monster stuff or the straight stuff?
“It depends. Like, this was great to be on. This was great to do, because I'm not the cyborg. Believe me, when they talk about Star Trek make up and stuff, that is brutal, to go through that every day. Where you're sitting in a chair for two or three or even six hours.”

How long did your cyborg make-up take?
“Cyborg stuff was about an hour and a half to two hours I had to sit there. It just wears on you, you know? Then they're always messing with you on set.” 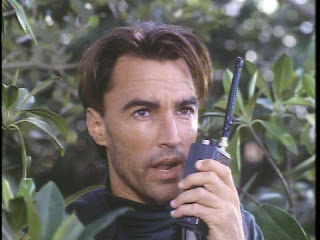 Does it make it more difficult to act?
“Not more difficult to act. It's just that it's very tiring. You've got to be in a chair every day, and you've got to do this stuff every day. It kind of wears you out. So when you're reading an action script you get, 'Oh man, I get shot, and for half the movie I've got this or that. And I'm in the water half the movie!' I'm hoping to do another film in March, back in LA, called Blue Motel, which is more of a dramatic, erotic thriller. I hope to venture that way a little bit, do more dramatic stuff, maybe even some comedy stuff. I'm dying to do comedy. I mean, I have on stage.”

Have you done much stagework?
“Yes, in the States. I lived in New York for about three years, and did plenty there.”

Do you prefer doing that?
“Yes, I love doing stage. It's just that, everywhere in the world, it doesn't really pay. Unless you're on Broadway or in a big show in the West End and you're The Guy or The Girl in the show. With TV and film, you can earn a nice living. But as far as a high, doing stage is by far the best. But I'm not a big enough name to be able to say, 'Yeah, I'll do Broadway and pay me $50,000 a week.' I'm not there yet.” 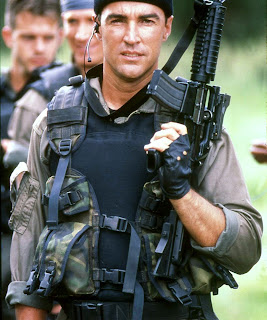 Are you aiming for that?
“I would love to, yes. I would love to get back on stage. I almost did something last year, but I had a conflict with this film. A pretty well-known play from the States about Air Force men and the gay issue. Robert Redford's picked up the rights to that, to do a film of it.”

Are you finding that, although you're not an A-list star, you're well-known enough for producers to come to you because they know what sort of films you tend to do?
“That's tending to happen more and more. More people are becoming aware of who I am and what I do, and that's good. That's how it starts, and then hopefully you have one project that breaks away and makes your name more of a household name. So we'll see. I think this year is going to be a very good year for me. I've got a couple of things slated and I'm producing a film.”

Most of the things that you've made, in the UK tend to go straight to video. Would you rather have them go theatrical?
“Oh, yes. Of course. It's really funny because Cyborg Cop did huge business in Japan and Korea. In parts of Asia it's seen a lot of cinema release. (They're just going to pour water on my head.) But yes, it'd be far better. We're hoping that this can do theatrical in parts of Europe and hopefully in the States. Because they're pretty impressed with what they're seeing, thank God. So we'll see what happens. But you never know. Even the big stars do films that never get to the screen. Although I guess Tom Cruise probably doesn't.”
Posted by MJ Simpson at 19:33