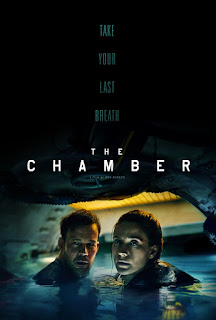 The premise of The Chamber is beautifully simple: four people trapped in a mini-submarine. Water is seeping in, time is running out. It’s a scaled down Lifeboat with a ticking clock. It’s handled very well and is a cracking good tale founded on confident direction and a quartet of solidly impressive performances.

The pilot is Mats (Johannes Kuhnke), an experienced Swede working as part of the international crew on a South Korean vessel. The boat is near North Korea, just on the edge of international waters. The submarine, the Aurora, is a beat-up, third-hand old tin can. That seems reasonable. Brand new mini-subs are not cheap. Get a reconditioned one.

His three passengers are US Special Ops agents who have been winched onto the shop from a helicopter. The British Captain (David Horovitch, whose career stretches back to an episode of The New Avengers) has to give them what they want for political reasons that neither Mats nor the audience are privy to, and which frankly don’t matter. The important thing is that the Aurora, which normally carries two people, goes down below the waves at very short notice, with four people on board, one of whom has no idea where he’s going, what he’s doing or why. And the other three would prefer to keep it that way. 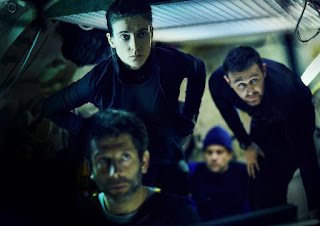 Of course what the Yanks are looking for is something American which shouldn’t be this close to North Korea. When they find it, they blow it up. And because they don’t retreat far enough away, and because the Aurora is an old underwater jalopy, this puts them in a bad situation.

Yeah, that’s pretty much the balance sheet right there.

The lead Special Ops agent is Red (Charlotte Salt: Casualty, The Hoarder), who is a serious, no-nonsense operative, utterly dedicated to her work. The mission comes first. End of. The other two are Denholm (Elliot Levey: Florence Foster Jenkins), a quiet, studious, techie guy and Andy (Christian Hillborg: The Bridge), a more aggressive, intolerant type who nonetheless has an emotional core because he’s the only one of the four with a child, whom he obviously wants to see again.

Over the next hour or so, the sub’s crew explore their options. Not in a calm, let’s-think-about-this sort of way but in an understandably tense, anxious and at times violent way. All the while, the water is steadily rising, the cruellest and most terrifying of ticking clocks. 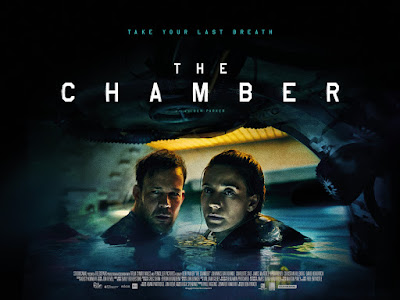 Despite having played at both Frightfest and Grimmfest, The Chamber is not obviously a horror movie, though it is very much being marketed as one. Don’t get me wrong, it’s scary because these four people are pretty much guaranteed to drown, or possibly die from the bends in an escape attempt, and that’s assuming they don’t kill each other first. But it’s the tension, rather than the fear, which underlies the story and, marketing aside, I would have classed this as a thriller. But it’s being sold as a British horror film – and it will certainly keep horror film fans happy – so onto the master list it goes.

Ben Parker, who made an equally tense horror short called The Shifter in 2011, does a frankly terrific job of keeping the viewer’s attention despite the limited cast and single location, evidently aided by a top crew. Byron Broadbent (Basement, Resurrecting ‘The Street Walker’) and Greg Shaw  (much TV comedy including Summer in Transylvania and Sorry, I’ve Got No Head) are jointly credited with production design and I suspect their work will shine in the Making Of when this hits DVD. The sheer practicalities of creating a cramped, flooded set that allows enough movement of actors and camera boggles my mind. You can’t have fly-away walls if it’s waist-deep in water, so how was it done?

Props also to cinematographer Benjamin Pritchard (The Ghoul) who does a corking job on lighting the set from believable light sources. And Will Gilbey’s editing should win some sort of award. Once they’re underwater, I think the film proceeds in pretty much real time. I’m struggling to think whether there were any ellipses or lacunae in the narrative, but it doesn’t really matter because the point is that the water keeps rising inexorably and it all fits together. Gilbey is a very experienced horror cutter of course, having also edited The Tapes, The Borderlands and A Lonely Place to Die (which he co-wrote with his brother). 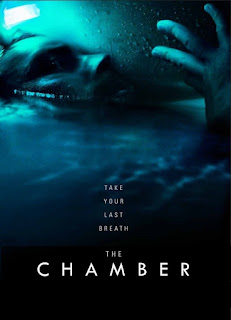 The Chamber was shot in Cardiff in May 2015 with Lottery funding from Ffilm Cymru Wales. It premiered at Frightfest in August 2016 with a UK theatrical release in March 2017.

One final name I must mention is the composer. I rarely discuss film soundtracks on account of having no musical knowledge (or ear) but it’s very much worth noting that this film’s cracking score is by James Dean Bradfield. I’m a big fan of the Manic Street Preachers and he doesn’t disappoint as he joins the list of pop stars who have scored British horror films.

Tense, taught and ultimately terrifying, The Chamber is definitely worth seeking out.