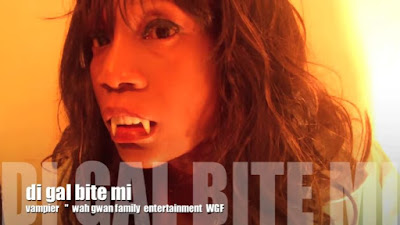 When I came across – quite by chance – this amateur, feature-length, British vampire movie I thought I had found something completely unknown and unrecorded. I subsequently discovered a review on specialist bloodsucker website Taliesin Meets the Vampires but this is still a staggeringly obscure film. There’s no IMDB page, no mention of this anywhere except YouTube, plus that one review and now this one.

In North London, a seductive young woman is actually a vampire, preying on flirtatious, cocksure men. A young man whose friend was killed by the vampire is told by his grandmother (who raised him) the truth about what happened to his parents. He always believed they left when he was eight but actually they were killed by vampires, sacrificing themselves to save their baby (shades of Harry Potter). Grandma says the man who can tell him about vampires is a wheeler-dealing Rastafarian who wears a permanent oxygen mask and reads from (I assume) the Holy Piby. At the end of the film, our hero and a friend discover the house where the vampire sleeps, sneak in and destroy her with a combination of stake through the heart and ripping down the curtains to let the sunlight in. 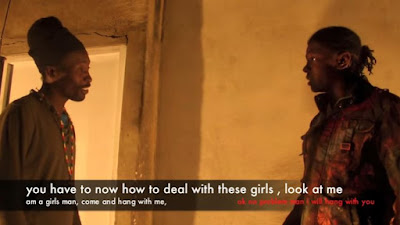 On an objective level, the film is solidly amateur. Camera work is wobbly and handheld with no real attempt at grading or anything fancy like that. There are lots of characters, many in only one scene. Actors wear their own clothes, improvise their dialogue, and for the most part can't act. Outside scenes are shot guerrilla-style so that quite a few people are in this movie without realising it. The whole thing is either a home movie or a dogme masterpiece – you decide.

But listen, I absolutely don’t care about the lack of basic film-making elements like script, acting, make-up or ‘vampire fang effects that weren’t bought at Poundland’. Di Gal Bite Mi has one big thing going for it, which makes it (I believe) unique in the history of British horror cinema, and the clue is in the title. Under the Shadow was in Persian, The Passing was in Welsh, and this, my friend, is a British horror movie with dialogue in Jamaican Patois. 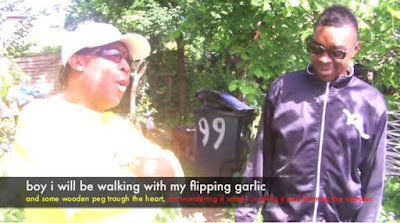 Filmed in, by, among and for the African-Caribbean community in North London, most of the film is delivered in a Patois – and with accents – so impenetrable to this white Midlander as to be effectively unintelligible. But not to worry because the film is subtitled. Admittedly the subtitles have their own curious take on grammar and syntax, and frustratingly they stop 15 minutes from the end of this 69-minute feature (although by then you’ll have the gist of what’s happening), but nevertheless they make the narrative (such as it is) understandable. And hence they make this film hugely enjoyable.

Some characters do speak more clearly and there are a few white folks, notably a young (Polish?) woman who has a scene where she implores the vampire to come and bite her. She is fed up with her miserable life and wants to become a glamorous immortal. However, a mysterious male voice explains that the vampire (spelled ‘vampier’ throughout the film) only ever bites men. Thirty years ago, she was wronged by a man who cheated on her, and now she returns every three decades to take revenge on arrogant, sexist men. (This of course slightly contradicts the bit about that guy’s parents being killed by vampires, although to be fair his grandma doesn’t say it was this vampire who killed them, just a vampire). 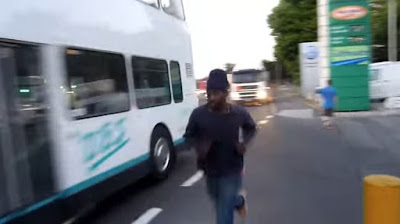 There is a (literally) running gag about a Rasta who sees his friend killed in the prologue, runs off – and keeps running. Every so often we cut to shots of him running along assorted pavements, and characters sometimes mention that they saw a scared Rasta-man haring along the road. Eventually, as the final gag of a light-hearted movie, he reaches Manchester(!) where he sees another vampire and starts running back down south again.

Apart from the above and a couple of vampire attack scenes – surprisingly well-shot with judicious use of fake blood – most of the rest of the film is simply two or more characters discussing the recent vampire attacks. There’s not really what you might call narrative development.

But none of that matters a jot. This is something strange and special. Here we have a horror film, made by people with a basic awareness of the standard genre tropes, but set within a distinctive community: genuine, indigenous black British horror film-making. I’ve never seen anything like it. 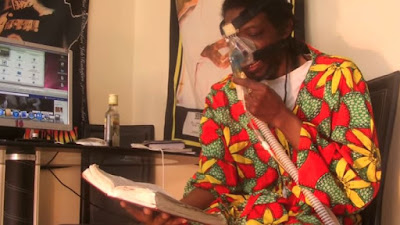 Notwithstanding that this is a horror-fantasy romp, this film reflects the community where it’s set and where it was made in a genuine, unforced way. This is not some right-on, Lottery-funded, serious exploration of London Jamaicans by a pretentious, if well-meaning, film school graduate. This is real. This one movie can tell external audiences far more about this community than a dozen serious dramas with budgets and trained actors and proper equipment – and it does so precisely because it was not made for external audiences.

What Di Gal Bite Mi reminds me of most is Nollywood. Though clearly British – and identified on YouTube as Jamaican (which it is, in an ex-pat sort of way) – this feels very much like a West African film. There is the same focus on reflecting the real lives of the audience, but within a fantastic storyline full of action, thrills and laughs. There is the same defiant determination to simply not worry about limitations or restrictions, to just plough ahead and make the film. But whereas such determination in a European or North American context can often be self-indulgent, this is not a self-indulgent film. This movie has been made to be seen. It has been made for audiences. Audiences beyond the amateur actors on screen and their immediate friends and families, but audiences like these actors, who identify with the characters, the settings, the attitudes, the dialogue, the jokes, the sex, the beliefs, the haircuts. 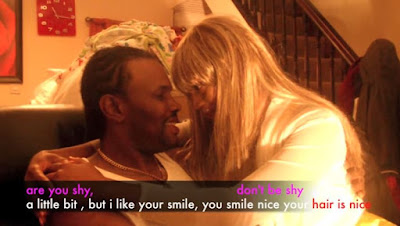 If you enjoy Nollywood films that were never meant to be seen outside of Nigeria, if you love old Mexploitation movies that were never expected to play North of Guadalajara, if you get a genuine thrill from discovering some Thai or Filipino obscurity that has never been subbed or dubbed into English, if you somehow combine this international eclecticism with a determination to seek out the most obscure and esoteric elements of 21st century British horror - so if you're me, basically - then you will derive great pleasure from watching Di Gal Bite Mi.

The man behind this movie is Jc Money whose YouTube channel is full of music videos, short films, animation, trailers and a couple of other features, all produced under the banner of Wah Gwan Family Entertainment (I don't speak Patois but even I know what 'Wah gwan?' means). His ‘ghetto action movie’ Murder Job and ‘ghetto movie’ 135 D Street were posted to YouTube in April 2013 and January 2014 respectively; Di Gal Bite Mi was posted between them in July 2013. 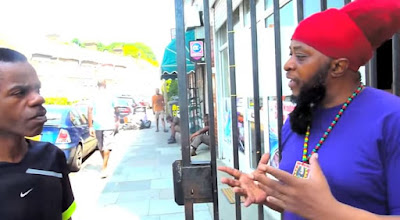 Money is a one-man band: writing, directing, producing, photographing and editing as well as playing the nominal hero whose gran sends him on a quest that ends in the eventual destruction of the vampire. Judging by the order of the cast list, in which everyone uses either a single name or a nickname, I would guess that Sharan B plays the vampire (under a selection of wigs) and Roll Out is probably the running Rasta-man.

While it’s pretty much impossible to google anyone involved in this film – and they’re certainly not on the old IMDB! – I have managed to dig up a little bit of info on Jc Money, or Devon Spence to use his real name. His primary interest is music: he studied music engineering at CONEL (The College of Haringey, Enfield and North East London) and has been performing since 1995. When Jamaican dancehall stars visit London he sometimes gets support gigs and has appeared on bills with the likes of Beenie Man, Bounty Killer and Mavado. As a film-maker, Money is entirely self-taught. He watched other people making videos and hence learned how to shoot and edit, leading eventually to his three (so far) feature-length films. 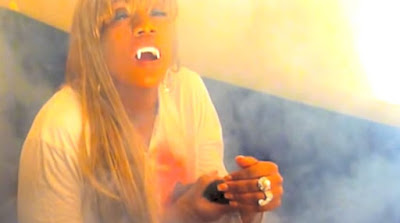 I was absolutely amazed and delighted to discover Di Gal Bite Mi and can definitely recommend it for anyone who is (a) open-minded and (b) bored with sitting through formulaic horror films.

If you want something different, try a vampire with a reggae beat.