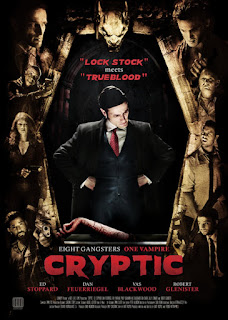 Cryptic is an amazingly good film. By which I don’t mean that the quality of the actual movie is staggering. Yes, it’s good – but it’s not perfect and it won’t blow you away. What I mean is that the fact that Cryptic is a good film – is amazing.

Because of who made it. This is the third horror film from the team of Bart Ruspoli and Freddie Hutton-Mills. They also wrote/produced the middling zombie time-waster Devil’s Playground and wrote/produced/directed the ridiculously titled World War Dead: Rise of the Fallen which, in a crowded market-place, manages to stand out as one of the very worst found footage pictures ever made in this country.

World War Dead was actually made after Cryptic but released first. My understanding is that the executive producers approached Ruspoli and Hutton-Mills, asking them to quickly bang out a zombie picture that could tie in to the centenary of the First World War (tasteful…). Can’t really blame the guys for taking the money and running, and the number of people who have suffered through WWD:ROTF must be pretty minimal, but still it’s not a good film to have on your CV. So it’s fortunate for the duo that Cryptic, which is significantly better than Devil’s Playground and infinitely better than the execrable World War Dead, is now out there to be viewed.

This has certainly revised my opinion of BR and FHM. I was genuinely surprised not just by how much I enjoyed Cryptic but by how skilfully it had been constructed. Where World War Dead was utterly devoid of characterisation or plot, Cryptic is a tightly structured narrative which relies almost entirely on characterisation.

So what I really meant to say, back up at top there, was: Cryptic is, amazingly, a good film. All the right words, not necessarily in the right order.

This is a classic gangster set-up: eight people, one room, loyalties and conflicts ebbing and flowing, tension building until someone lets fly with a shooter. There is a brief discussion about how similar the situation is to “that film, the one with dogs in” to acknowledge that the film-makers understand the territory wherein they are currently working.

The location is a crypt underneath a church (in, presumably, London). Our first two characters are ‘Sexy’ Steve Stevens, a dapper and rational crooked banker (Ed Stoppard: Upstairs Downstairs redux, The Frankenstein Chronicles and Dan Dare audio dramas – rocking a very fine set of threads) and ‘Meat’, a nervous and not terribly bright gangster (typically superb performance by the great Vas Blackwood: Lock Stock, Creep, A Room to Die For). Both have been sent to the crypt by a local Mr Big, as have the next to arrive, brothers Jim and John Jonas.

The Jonas Brothers (presumably named as a gag about the soulless boy band from a few years ago, which fairly accurately dates when this script was written) are both psycho idiots. One is slightly less idiotic than the other and one is slightly more psychotic. But you wouldn’t trust either of them to cat-sit for you or to count to 20 without using their fingers. They are played by Philip Barantini (World War Dead, Young High and Dead) and Daniel Feuerriegel (Spartacus TV series, Pacific Rim 2).

Completing the sextette are Cochise (Ray Panthaki: The Feral Generation, 28 Days Later, World War Dead), an arrogant fellow with intricate designs cut into his beard, and his moll Alberta (Sally Leonard). All six have been sent to the crypt with instructions to locate and guard – but not open – a coffin. Their employer will be with them in due course but has been delayed by illness.
It’s a very Beckett-ian set-up and once again Ruspoli and Hutton-Mills acknowledge their debts with the name of the godfather behind all this is. Meat, Cochise and the others are all… waiting for Gordon.

Two other people show up. One is Ben Shafik as Walter, a posh junkie looking for some drugs he stashed in the crypt. (Shafik was in not only World War Dead and Devil’s Playground, but also the Bart Ruspoli short that the latter was based on, The Long Night.) The other is Gordon’s crooked lawyer (Gene Hunt’s brother, Robert Glenister: Spooks, Hustle, Law and Order UK) who knows all the others (except Walter, obviously) though they don’t know him.

Five gangsters, a lawyer, a banker and a junkie.

The coffin, when located, proves to be a curious metal construction, solidly locked. What – or who – is in there? Meat has an idea, because he has invested in a vampire-slaying kit.

Over the course of the film we learn about the gradual decimation of organised crime in the area, a series of gangland murders which some are saying is the work of a vampire, or at least, someone pretending to be a vampire.

Because, as Steve Stevens assiduously points out, there are no such things as vampires.

But then, if there are no such things as vampires, what is in that coffin and why has the frustratingly delayed Gordon assembled this team to guard it. Guard it against what?

As the plot develops – through dialogue but without being talkie – the characters find themselves in groups of two or three, often discussing the others. Unable to find his junk, Walter is getting withdrawal symptoms. And attempts are made to resolve an unpleasant situation caused by the slightly more psycho of the Jonas brothers having recently raped and murdered a 17-year-old girl. 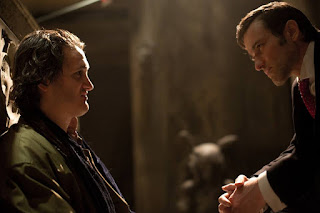 Eventually somebody cracks and lets off a shooter. Which punctuates the dialogue but thankfully doesn’t tip the film into general mayhem. By now the door is locked and no-one is getting out until Gordon lets himself in. And eventually, inevitably, one of the group, in a dark corner of the crypt, unseen by the others, is killed – with subsequent examination revealing two puncture wounds in the neck.

Five gangsters, a lawyer, a banker and a junkie. And one of them is – possibly – a vampire. Well, you’re spoiled for choice there, aren’t you?

It is a measure of how carefully plotted Cryptic’s script is, that each act of this 90-minute film is exactly 30 minutes long, the inciting incidents for acts two and three occurring dead on the half-hour and the hour. You could set your watch by it. And there’s some lovely, lovely dialogue in the script, some real zingers, many of them delivered by Steve Stevens whose masterful calm clearly infuriates the psycho Jonas Brothers. It’s a cracking script that, while it doesn’t unfold in exactly real time, could probably be adapted into a stage play without too much difficulty.

Notwithstanding all the above, the film falls down in two respects. One is the sound mix. As the group fragments, people hold whispered conversations in corners of the crypt. And sometimes the dialogue just isn’t audible – especially when Ray Panthaki is speaking. You can pump up the volume on your telly but you’d better remember to turn it down again before the next round of shouting and shooting.

The other problem is the character of Alberta, whom you may notice I have barely mentioned. And that’s because she doesn’t really have a character. Which is no reflection on the actor. It’s not that she isn’t given stuff to do. There’s a couple of very funny scenes where two male characters discuss matters while, in the background, Alberta struggles to lift a dead body on her own. And when it is revealed that she is from Transnistria there is debate over whether that is where Dracula comes from.

But there’s just no depth to Alberta, a situation heightened by the seven well-rounded characters surrounding her. Even the junkie has more personality. She is defined by her skin-tight, cleavage-flaunting black leather outfit, her flame-red hair and her eastern European accent. None of those elements define character. She might as well be somebody at Comic-Con pretending to be Black Widow. Maybe Ruspoli and Hutton-Mills suffer from the traditional British male writer’s inability to create realistic female characters. Or maybe they just couldn’t work out what to do with her, beyond using her as a sounding board so that Cochise doesn’t have to talk to himself. 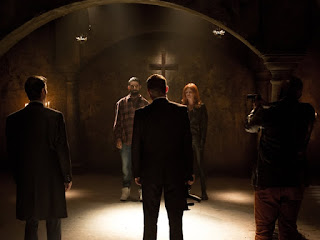 Those cryptic, whispering corners – and indeed the rest of this small but adroitly used set – come courtesy of top production designer Caroline Story (The Seasoning House, Vampire Diary, Its Walls Were Blood). The excellent hair and make-up is by Emma Slater whose British horror CV includes The Borderlands, Stormhouse, Evil Never Dies, Blood Moon, World War Dead, The Rezort and 47 Meters Down). There’s some fine cinematography by Sara Deane (The Horror of the Dolls, World War Dead) and a sympathetic score by Emma Fox. But I think what really stands out is the costume design (not least Ed Stoppard’s terrific coat, which I craved throughout the entire film) courtesy of Raquel Azevedo (The Seasoning House, Truth or Dare, Scar Tissue). It’s somewhat ironic that a movie with so many female department heads should fall down so badly in its non-characterisation of the only woman on screen (a big fat zero on the Bechdel test here).

Ruspoli and Hutton-Mills, whose other feature was prison drama Screwed, are currently in post on sci-fi picture Genesis, which uses many of the same cast and crew as Cryptic. The website for their Next Level Films company says their fourth feature will be called Dark Web, but that’s out of date – it was a comedy thriller that got shelved when they were unexpectedly asked to make World War Dead. 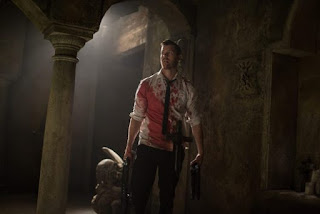 Shot in 2014, Cryptic was released on UK DVD in February 2016 but doesn’t seem to have appeared anywhere else yet. The IMDB lists Chinese and South African releases in September 2014 which we can take with a pinch of salt.

My expectations when I picked up this DVD were low, which only heightened my delight when Cryptic turned out to be such a whip-smart, carefully structured slice of gangster/vampire cinema. It’s a long, long way from the over-the-top bullets’n’bloodsuckers action of From Dusk Till Dawn or Dead Cert. Give it a spin and I think you’ll really enjoy it.