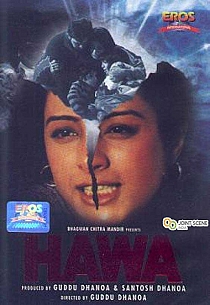 Imagine if you will an Indian version of Poltergeist - I like to think it would be called Baltigeist, but maybe that’s just me.

Sanjana (Tabu, who played Lady Macbeth in a 2003 Bollywood version called Maqbool) moves into an isolated new house with her brother (Imran Khan - no, not the cricketer!) and two young daughters (Baby Hansika and Baby Bhavika) and strange things start to happen. Sanjana works in an antiques shop in the city and one day a weird old Tibetan woman gives her an amulet, urging her to always carry it with her - but Sanjana almost immediately sells it to a visiting American couple.

The weirdness builds nicely in this entertaining, non-musical Bollywood production: the family’s dog is acting strangely, something unseen is moving around outside, doors and windows are found open which were previously closed and locked. Problems with the family car cause it to break down on the bridge which crosses the river to the new house, a bridge so narrow that the car doors won’t actually open. Also, Sanjana sees the Tibetan woman sitting on a bench near the road and on checking finds her dead. She calls the authorities but when they look for the body they find nothing.

Eventually, Sanjana herself is attacked by an invisible being. She takes the children to stay with her friend Pooja (Grusha Kapoor) but Pooja's husband (Vishwajeet Pradhan) wants the visitors gone. Back at the house, Sanjana is attacked again - twice - and finally some sort of doorway to the netherworld opens up in the closet in the girls’ bedroom and the younger one is sucked in. As Sanjana and her elder daughter escape from the house, an exorcist (Mukesh Tiwari) arrives who reveals that the place is built on ancient burial pits. It’s the old ‘house built on old Indian burial ground’ schtick that we’ve seen in hundreds of Hollywood horror movies - but this time it’s a different type of Indian!

The final confrontation finds Sanjana (who has fortunately been given back the amulet by the American couple) descending into the uncovered burial pit to rescue her daughter and coming face to face with a terrifying giant semi-skeletal demon which I assume is an amalgamation of all the restless souls in the place. 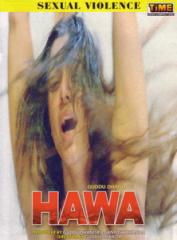 Hawa is a terrific film, with a spooky first act and a scary, exciting climax. It’s only in the middle where the movie drags and one does literally find oneself thinking, “Oh no, she’s being raped by an invisible ghost again...” Which is a shame because Tabu gives an excellent performance in a series of frightening and powerful scenes. At 129 minutes, the film could stand some trimming, but it’s already short by Bollywood standards so that was never going to happen.

Production values, including the final CGI monster, are good (Ashu Trikha is credited with special effects, Sripad Natu with cinematography) and the acting’s fine. The story gets a little confusing in places - it’s not really clear where the exorcist suddenly appears from and Sanjana’s brother seems to disappear arbitrarily halfway through - but among the new wave of Indian horror films, like Bhoot and Makdee: The Web of the Witch, Hawa stands up well.