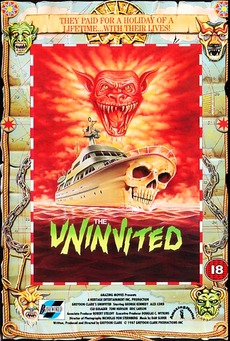 One sure sign of a quality movie is that it’s not sure what its own title is: this is called The Uninvited on the front and back of the (3D!) video sleeve but just Uninvited on the spine and on screen. But could a film made by the creator of Without Warning, Wacko and Satan’s Cheerleaders really be all that bad?

Alex Cord (Airwolf) plays rich guy Walter Graham - twice on the cover of Forbes magazine but actually a crook - and George Kennedy (The Naked Gun, Demonwarp) is his partner Mike Harvey. They set off from Fort Lauderdale for the Cayman Islands and provided they can reach there in three days they can get their hands on vast amounts of cash (the details aren’t clear - it may be some money laundering scheme). 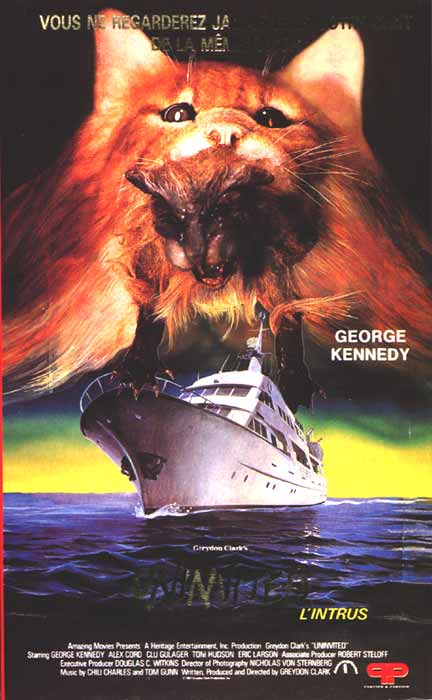 Suzanne also brings aboard a cat which she has rescued from a dockside trash can. Also on the boat is henchman Albert (Clu Gulager: Return of the Living Dead, Nightmare on Elm Street II) plus Rachel (Dirk Benedict’s then-wife Toni Hudson: Texas Chainsaw Massacre III), the boat’s captain whose father once owned the vessel.

Now, the key to all this is the cat. Back in the 1980s when I occasionally performed stand-up comedy, one of my routines involved demonstrating how Alien was actually a remake of Ten Little Indians and proving that the murderer was actually the cat. And on this ship - it actually is the cat! We know this because of a prologue at some scientific establishment where the cat escapes while being injected and then kills several people (the doctor in this scene is Greydon Clark himself).

The cat has some sort of deadly mutant creature inside it which climbs out of its mouth, but it takes a long time for even the audience to realise this because the effects are so hopelessly inconsistent. Is this thing just sticking its head out of the cat, or is it climbing out completely and then back in, or is the cat itself mutating when it attacks? In fact, the mutant thing does crawl out of the cat, yet somehow when it hurls itself on its victims moments later it’s twice the size of its host! A&A Special Effects are the people responsible for the hilarious hand-puppet which rips people’s throats out, apparently.

When the cat-thing attacks, it’s not only strong and vicious but also has poisonous saliva which contaminates the victim’s blood and causes them to break out in not-terribly-convincing bladder prosthetic effects (courtesy of the imaginatively named Makeup Effects Lab). Albert is first to go, then Mike, and gradually the crew is whittled down. 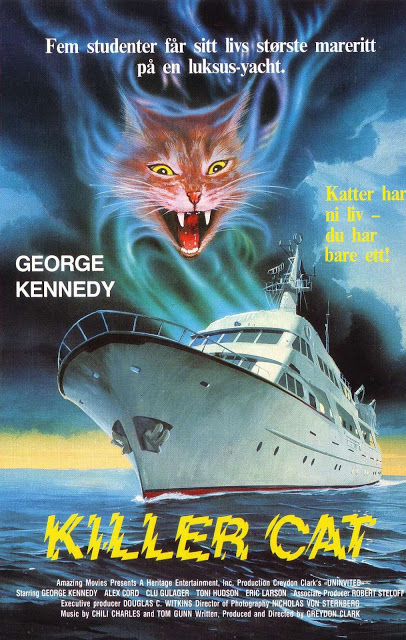 Meanwhile the engine has broken down (the cat’s doing of course!) and Walter has shot up the radio. The ending (and it’s not too difficult to spot which couple will survive) is a ridiculous let-down, and in an extraordinary editing cock-up, at one point there are two consecutive takes of the same dialogue!

This is not the worst monster-on-a-boat movie I’ve ever seen - that honour goes to Creatures from the Abyss - but it’s pretty bad. There’s no actual nudity though Bobbie and Suzanne do spend most of their time in tiny bikinis, and when they’re fully dressed it’s in the most awful 1980s fashions. In terms of wardrobe, this really is symptomatic of the Decade That Good Taste Forgot.

A film to be watched only late at night while very, very drunk. Unfortunately I saw it sober in the middle of the afternoon.

Email ThisBlogThis!Share to TwitterShare to FacebookShare to Pinterest
Labels: 1987, USA