It doesn’t take long to spot that this is a David DeCoteau film (from his later period). Six young men, all of whom look like they are auditioning for the lead role in a TV movie called The Jude Law Story and who spend a considerable amount of time shirtless. Hey, why not? If it was a half dozen young ladies wandering around in their skimpies, no-one would bat an eyelid - but the film would be indistinguishable from a million others.

Besides, there’s the gorgeous Debra Mayer (Prison of the Dead, Hell Asylum, Decadent Evil) to distract those not interested in the masculine eye candy.

Riley Smith (Alien Arsenal, Eight Legged Freaks) stars as Christopher Sawyer, a young man who enrols in the mysterious Carmichael Bible School which has a maximum of six students and two staff: glamorous thirtysomething widow Mrs Bouvier (Mayer) and the eponymous Reverend Carmichael (Chad Burris, not a great actor and apparently now working as an agent). Her late husband, we learn, investigated zombies in Haiti and discovered the scientific basis behind them. The Rev has founded his own weird church and has devised a form of confessional booth which draws out its occupants’ sin by some pseudoscientific means.

Sawyer joins his five almost identical room-mates in the small dorm which they share. (Frequent stock establishing shots show the building to be very large, so you have to wonder what goes on in the parts that aren’t the dorm, the classroom/chapel, the dining room and Mrs B’s quarters. Carmichael, we are told, lives down the road.) Anyway, we have hunky Rusty Sankervitch (Huntley Ritter: Wishcraft), blonde, rebellious joker Billy Parker (Kevin Calisher, who seems to have no other screen credits apart from an episode of Roswell), plus Mike McCready (Ben Indra: Raising Dad), Paul St.Clair (Drew Fuller: Vampire Clan, Charmed) and Sam Vollero (Travis Sher) who are somewhat short on identifying characteristics but make up for it by being abnormally good-looking.

The previous sixth student was Blake Godfrey (Rhett Jordan: Crocodile) whom we saw in a lengthy prologue being seduced by Mrs B while Carmichael looked on, rubbing his chest in lustful excitement (he’s not that much older than the boys in his charge). Some sort of weird magical ritual was attempted but it evidently failed, Blake was ‘disposed of’ and his schoolmates were told that he had been summarily dismissed after being found smoking a joint.

During class, Rusty is invited into the confessional booth. At dinner that night, he appears wearing a white vest, straining somewhat to contain his pecs, instead of the customary shirt and tie. Mrs Bouvier doesn’t seem to mind and allows the boys to drink a glass of wine each, which Christopher declines. That night Christopher sees the others tossing and turning and then moaning as, still asleep, they rub their hands all over their firm young torsos.

This goes on for some time. 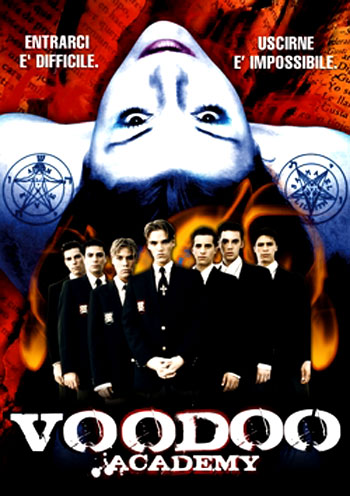 Apparently the VHS version is about 20 minutes shorter than this 92 minute DVD, most of the missing material (snipped by executive producer Charlie Band for being too homoerotic) being from the prologue and this very, very long sequence. To be honest, even if nubile young nymphets had been doing exactly the same thing I would have got bored after, I don’t know, eleven or twelve minutes of it.

While Sam, Paul, Billy and Mike are writhing semi-naked on their beds, Rusty stands up and sleepwalks upstairs to Mrs B’s apartment, furtively followed by Chris who witnesses the unholy and weird ritual that the school’s only two staff are perpetrating. The next morning, Rusty has disappeared and the others have adopted his ultra-casual look. Can Chris save his friends from succumbing to the satanic practices of the Reverend and Mrs B?

Voodoo Academy was shot in four days (even quicker than Decadent Evil) and that shows in the limited cast, limited sets and lengthy scenes. There is a half-decent story buried in there and DeCoteau’s direction (under his own name) cannot be faulted; most of the acting is good too. The story doesn’t make an enormous amount of sense, completely ignores huge questions (there is, for example, only one passing reference to the boys’ parents) and requires great leaps of logic. But there is some sort of sense there: it seems that Mrs Bouvier requires six completely pure souls in order to achieve... whatever it is she’s attempting to achieve. I think she mentions at one point that if she is successful she will have the power to raise a zombie army and rule the world. Or something. The script is by Eric Black who also wrote Bikini Goddesses and co-wrote and co-directed (with Matthew Jason Walsh) The Witching. 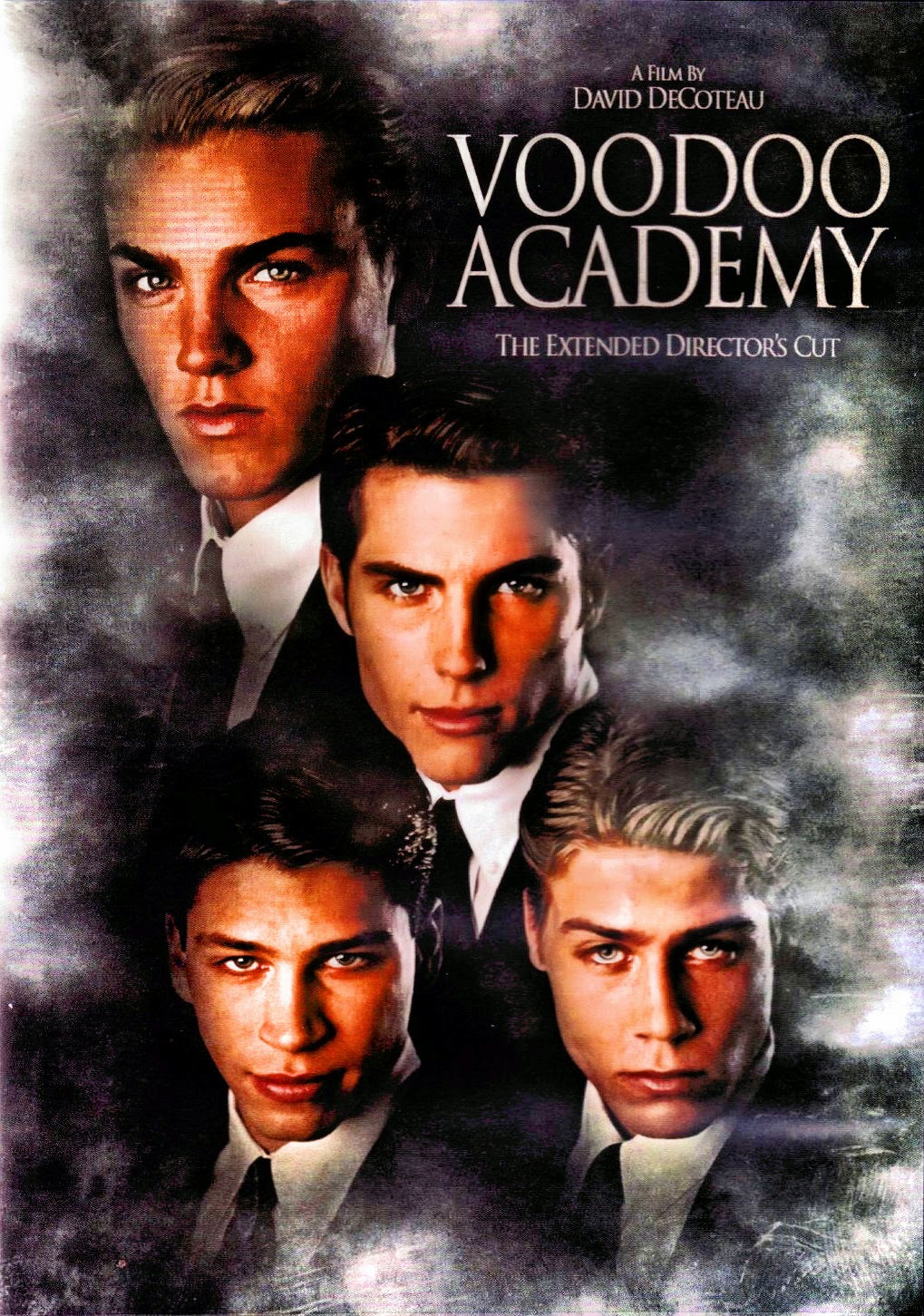 Opening with a ‘Cult Video presents’ caption, this is nevertheless identified in the closing credits as a Full Moon film although curiously the only appearance of Charlie Band’s name is the credit for Bennah Burton-Burtt (“assistant to...”). DeCoteau went on to direct more homoerotic horrors for his own Rapid Heart company and used his ‘Richard Chasen’ pseudonym on the shortened version of this which, according to some sources, was retitled Subhuman. This was one of the last credits for producer Kirk Edward Hansen (The Vampire Journals, Frankenstein Reborn!, Witchouse, Totem, The Dead Hate the Living).

Cinematographer Howard Wexler also lit Ancient Evil: Scream of the Mummy, The Brotherhood, Totem and Leather Jacket Love Story for DeCoteau and now spends most of his time working on ‘erotic thrillers’ such as Sapphire Girls, Visions of Passion and Model Lust. (‘Model Lust’? ‘Sapphire Girls’? It’s like they’ve run out of sensible two-word titles and now just open the dictionary at two random pages). Though the photography is good, the image itself is incredibly grainy in many places though this may be a transfer fault. There are also some noticeable scratches on the print which is unusual for a straight to video movie!

Regular Charlie Band effects guy Christopher Bergschneider (Totem, Witchouse, Blood Dolls, Leeches) and Jeffrey S Farley (Babylon 5, Leeches, Scanner Cop II and the Red Dwarf US pilot) together provide ‘prosthetic and puppet effects’ - and yes, they do involve dolls. David Lange (Ozone, Jigsaw, Bad Movie Police) is credited with ‘special visual effects’. All the significant effect shots are featured heavily in the trailer which should probably be seen after the film. However, one cannot avoid knowing that Mrs Bouvier turns into a sexy horned demon because that is how she is depicted on the front of the bloody DVD sleeve.

Not a terrible film by any means, Voodoo Academy is a brave attempt to subvert the genre by substituting gorgeous guys for sexy gals. It raises the questions of what the film would have been like if the students were female. The seducer would probably still have been female and there might have been some actual lesbian fondlings whereas, for all its homoeroticism this movie’s hunks are as pure as driven snow and limit themselves to fondling their own muscles, never even sneaking a hand inside their bulging Calvin Kleins. Nevertheless, you can kind of see why Band snipped the film down to 70-odd minutes: not just to reduce the homoerotic content but also to give the thing some pace and stop it getting bogged down in endless (well lit, well shot) sequences of young men rubbing their chests.