In April 2008 I solicited a half-dozen e-mail answers out of my mate Tristan about his short film I Love You. Was this really two and a half years after our previous chat? Good grief.

What features were you working on immediately before and after (or during!) the production of I Love You?
“Before starting shooting I Love You I had pretty much just finished working on the new film from Clive Barker’s Book of Blood series - the film has the same title - which has been shooting up in Edinburgh. I was providing various prosthetic effects for that.”

What did you learn on Plastic Reality and Pixel that was useful to you on this film?
“I learnt to work with actors more this time round. Also with my crew; I feel I am starting to gain more confidence with my ideas and how to deal with my crew to get the image I am looking for.”

I notice that there's no writing credit on I Love You. Does a film this simple in concept have a script in any conventional sense and, if not, how do you convey what you want to your cast and crew?
“There wasn't a script as such, more of a treatment. It was always so heavy visually that I didn't feel a need to write a full, super-detailed script. I knew my crew trusted my crazy ideas and would go with it despite the lack of a full script. Leslie Simpson and I talked about what the part was and we both felt that it was always going to be a visceral and spontaneous piece of work - drawing from what we could drum up on the day of shoot.”

How closely did you work with Duncan Jarman on the prosthetics?
“Duncan helped apply all the prosthetic work on the film whilst I did the prep work, inbetween making dead people on Clive Barker’s Book of Blood!” 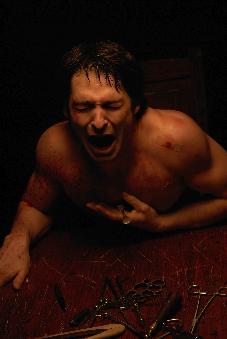 I was impressed with the sound design - what sort of input did you have on that?
“I knew what I wanted from the sound early on; quite basic really, with plenty of ripping flesh sounds to make you feel what he's going through even more. The music was always going to be low key but effective in its atmosphere and tension which Ian Morse my music guy did perfectly.”

Why has I Love You been finished before Pixel, which started first? When will we see Pixel?
“Ha ha... Pixel was shot first, but it is still having the finishing touches done to the CGI effects in it and I just couldn't wait any longer before making another film. I Love You was born from the frustration in me, in needing to get a film out there for people to see. I hope that Pixel is finished soon, before I get too hungry for more and make something else!”