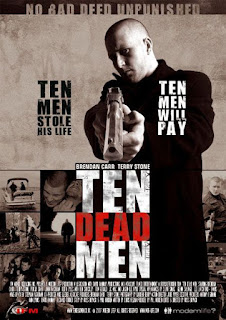 Ten Dead Men (or 10 Dead Men as the US distributor insists on calling it) is a brutal, violent film in which unpleasant people hurt each other very badly. It is also skilfully crafted and adroitly directed with some excellent performances and a thoroughly professional look.

Like the previous feature from director Ross Boyask and producer Phil Hobden, Left for Dead, this is a gangland revenge tale in which a bloke who makes his living by hurting and killing people decides to give it all up and settle down, only to find that his bosses want to punish him by, ah, hurting and possibly killing him. So he goes away then comes back and, ah, hurts and kills them. The morality of the central character is distinctly dubious but then it must perforce be in any gangster film.

Certainly, Boyask and Hobden’s films don’t glamourise the lifestyle like studio produced gangster films do. These characters are unpleasant men living miserable, unhappy lives. But whereas Left for Dead was borderline fantasy and devoted most of its action to fancy kickboxing, Ten Dead Men is much dirtier and more realistic. There are a few spin-kicks towards the end but you certainly couldn’t call this a martial arts picture. Last time I checked, slamming someone’s head repeatedly into the floor was not actually a martial art. 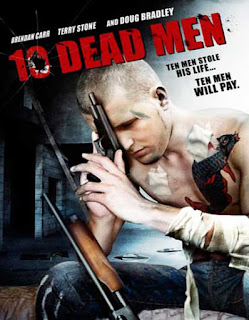 Brendan Carr (who played a ‘spectacular warrior’ in Intergalactic Combat) stars as Ryan who has actually left all that and settled down with a wife and a mortgage. But he finds himself pulled back into the darkness and shortly afterwards, mob boss Hart (Terry Stone: Doghouse, Jack Said, Kung Fu Flid) has Ryan executed after first forcing him to watch the murder of his wife Amy (some excellent, terrified acting from ex-EastEnder Pooja Shah). Ryan’s bullet-riddled body is wrapped up and thrown into the sea but somehow... somehow... he survives and makes it back to the beach.

This is the closest that the film gets to the not-quite-realism of its predecessor. Although I did wonder at some points whether this whole thing was flashing through Ryan’s brain in one second as the bullets take his life away, I think that ultimately we just have to accept that somehow... somehow... he has survived.

So actually, Left for Dead would have been just as good a title here. Possibly even more apposite. But the Modern Life? team had already used it once.

What follows is basically a sequence of revenge killings on the ten men who were directly involved, in one way or another, in the death of Amy and the pseudo-death of Ryan. These include professional cage-fighter Bruiser (Tom Gerald), pathetic body-disposer Axel (John Rackham, writer-director of Bloodmyth), compulsive gambler Harris (Lee Latchford-Evans, formerly of ghastly plastic pop combo Steps!), corrupt cop Detective Inspector Keller (Ben Shockley) and the closest thing that the film gets to comic relief: a bickering couple named Parker and Garrett (JC Mac and Jason Lee Hyde, both in Stagknight) who are probably gay although this is never explicitly stated. There is also a smartly-dressed, sinister sadist simply called the Projects Manager (Keith Eyles, who played the father in Ross Shepherd’s award-winning short Kingdom of Shadows) who becomes the main villain, Hart himself keeping well out of the way of any actual violence. 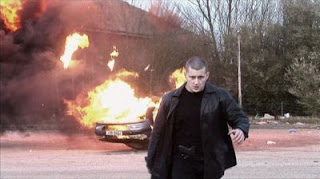 Obviously that’s not ten men but the others such as Stone (producer ‘PL’ Hobden) aren’t as clearly defined and seem like rather interchangeable, shaven-head thugs. The film’s website has brief character bios which mention, for example, that Stone is Hart’s nephew but this is never stated in the film.

All this would be a frankly tedious sequence of one fight after another - simultaneously violent and picaresque - if the film was told in chronological order. But where the script by Brighton-based Chris Regan (Jenny Ringo and the Monkey's Paw), working from Boyask and Hobden’s story, works brilliantly is in chopping up the tale and mixing it with slices of earlier events so that we only learn why this is happening as we’re watching it happen. Cause and effect bundled together into one remarkably coherent and logical plot.

Not that the viewer could necessarily work out precisely what is going on without a little help. Hence the drily detached narration by Doug Bradley - which at first seems, as narration invariably does, tacked-on and gratuitous. As the film progresses, as we start to realise which bits of the story happened before or after other bits (including, later, some bits which we saw out of context at the start), Bradley’s narration becomes not only worthwhile but indispensable. 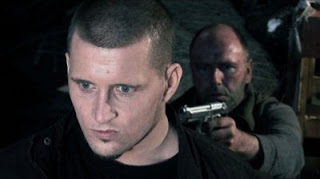 Ten Dead Men eschews the voyeuristic glee of so many gangster films in favour of powerful character conflict and fights which, though realistic, remain watchable and serve a narrative purpose. It is an imaginative, well-crafted British gangster thriller which, if there was any logic in the world, would have had a theatrical release instead of whatever tedious, inferior reworking of Lock, Stock Guy Ritchie has churned out this month.

Also in the generally very fine cast are Jason Maza, Silvio Simac (Transporter 3, Intergalactic Combat), Adrian Foiadelli, Cecily Fay (who was inside the TV series Marvin costume in the awful Hitchhiker’s Guide movie) and Glenn Salvage (The Silencer). Many of the cast were in Left for Dead and/or Boyask’s earlier film fIXers; quite a few were in Bloodmyth and/or Rise of the Footsoldier. 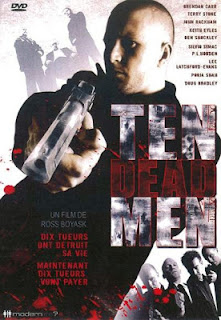 Scott Benzie (Soul Searcher, Room 36) provides the score. The cinematographer was Darren Berry and Ross Boyask did his own editing. The very busy stunt co-ordinator was Jude Poyer (Stag Night of the Dead, Beyond the Rave) whose early work in Hong Kong includes the likes of Star Runner and Gen-Y Cops.

Not just another British gangster film, Ten Dead Men is proof that there is life in the genre yet, despite the paucity of imagination which normally infects these films.