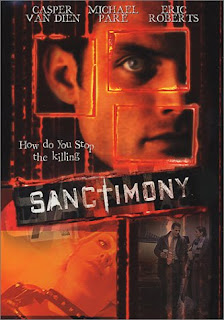 Seattle detectives Renart and Smith (Michael Pare - Space Fury, Lunar Cop - and Jennifer Rubin: Nightmare on Elm Street 3, Little Witches, Last Lives) are on the hunt for a serial killer dubbed the ‘Monkey Maker’ by the press. So far he has killed an impressive 15 times(!): the first six had their eyes gouged out, the next six had their ears cut off, and the most recent three had their tongues cut out. That’s one sick puppy.

Meanwhile yuppie stock trader Tom Turner (the far, far too good-looking Van Dien: Starship Troopers, Sleepy Hollow, Revenant, Dracula 3000), who works in an extraordinary, ultra-modern, darkened office with only a bank of high-tech monitors and a telephone headset, is getting bored. He visits an underground fetish club where a select few can, in a back room, watch snuff movies being made. Renart has a tip-off about the snuff studio but arrives just too late to catch anything or anyone, so he returns to his heavily pregnant wife (Oxenburg, who is of course Mrs Van Dien in real life and played Princess Diana in at least two telemovies).

The Monkey Maker claims another victim, and this time there’s a witness - Tom Turner - whose story is full of obvious holes but who has a good lawyer. Despite being warned off by their boss (Eric Roberts: The Shadow Men, that Doctor Who TV movie), Renart and Smith investigate further into Turner’s world - but who is controlling the game? Them or him? Sanctimony builds to an extraordinarily nasty third act, which sees one of the main characters hideously murdered, another almost murdered in a staggeringly sadistic trick, another murder shown live on TV and a poetically filmed two-gun rampage in a restaurant. 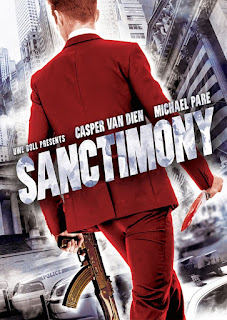 It would be very easy (and lazy) to see this as a lower-budget spin on American Psycho, which came out around the same time, but the only similarity is that the killer is a yuppie, and we know his identity pretty much from the start. Sanctimony is a gripping detective thriller with a side order of serial killer horror; not a whodunnit but a willtheystophimfromdoingitagain? Boll had previously made a German serial killer movie, Run Amok, and subsequently directed the zombie-packed movie of the Sega game House of the Dead.

Also in the cast are David Millbern (Slumber Party Massacre, Deep Freeze), Crystal Lowe (Children of the Corn: Revelation), Dolores Drake (who was also in that Doctor Who TV movie) and Ken Camroux who has the bizarre claim to fame of having made two movies in 1999, both called Y2K.

A minor gem, Sanctimony is exciting, scary and highly recommended.