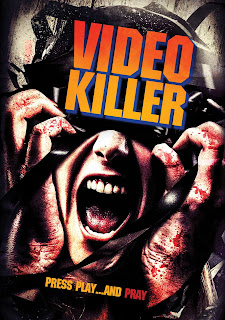 The latest feature from the director of The Secret Path, The Mothman Curse and Wolfskin is as idiosyncratic, distinctive and downright creepy as one would expect. An actress named Victoria Falls (really?!) stars as Amy, a young woman living alone who receives an anonymous gift of a manky old VHS tape. She gets her old VCR out of the loft (by standing on a Workmate adjustable bench, which you are explicitly not supposed to do!) and watches this.

It turns out to contain simply animated child-like drawings (think Charlie and Lola, but a bit rougher) which show a boy dying horribly when his kite hits power lines – after he is distracted by a dark figure with bleeding eyes.

Amy receives further tapes with similar unpleasant animations and also starts to glimpse an unnerving figure – who may be the one depicted in the cartoons – on the periphery of her vision. More disturbing still is that the tapes include brief live action clips which seem to show someone being killed. 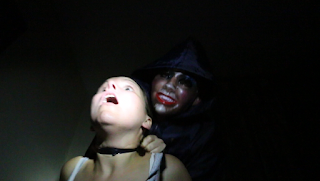 We also meet Michael (Darren Munn: The Mothman Curse, Paranormal Sex Tape and vampire feature Drink Me, produced by Richard but directed by his husband, Daniel), who has evidently been receiving these tapes for some time and believes that the answers lie in a local country park (the same one where The Secret Path was filmed). Both Amy and Michael record their thoughts on their iPhones although this is thankfully not found footage. Mansfield adroitly cuts between the characters’ video selfies and more conventional camera-work.

By uploading her videos onto the web, Amy establishes contact with Michael. We have also met some other people who are similarly haunted by this dark figure, also filming themselves. Gradually our understanding of what is happening in these people’s lives deepens until Amy and Michael meet – briefly – and he gives her a bag of tapes, leading to a powerfully ambiguous (if slightly predictable) conclusion. 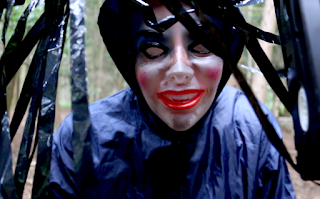 Our glimpses of the figure throughout (or perhaps there’s more than one) just show us a hooded anorak or parka and a creepy mask. (It’s actually a face for a Resusci-Anne CPR training mannequin. Richard reckons that the cost of this mask, plus a can of spray paint, constituted the film’s entire budget.) There are also a couple of very effective dream sequences in which someone is attacked by a big bundle of loose video tape, crawling across the floor like a giant amoeba then wrapping itself around the victim, smothering them. This effect has of course been achieved by pulling the tape away then reversing the footage but it is amazing how good it looks, even with that knowledge at the back of one’s head. 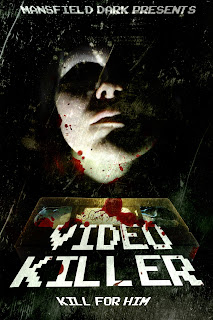 Mansfield hasn’t skimped on genuine film-making techniques, with plenty of establishing shots, different angles and cuts, the sort of camera-work and editing that distinguishes a real film from something lazily cobbled together. Care has been taken to tell a story, albeit one that raises as many questions as it answers. The result is genuinely creepy, a fascinatingly unnerving tale of justified paranoia (helped by an absolutely cracking performance by 'Falls', full of credibly wide-eyed terror). You may occasionally wonder: well, why doesn’t she go to the police, but what is there to report? “Someone rang my doorbell and left a VHS tape of strange cartoons on my doorstep, and now I think I am catching glimpses of some sort of supernatural entity.” Not much to go on, is it?

There’s something of an unavoidable J-horror influence in Video Killer but there’s much more at work here. If forced to sum this up as a high concept ‘X meets Y’ idea, I’d say it’s a four-way mash-up between Ringu, The Last Horror Movie, The Blair Witch Project and Whistle and I’ll Come to You. Richard Mansfield is of course a huge MR James fan and the monstrous entity here is definitely James-ian, while the scene of Michael giving Amy his bag of tapes has a certain ‘passing the runes’ quality to it. 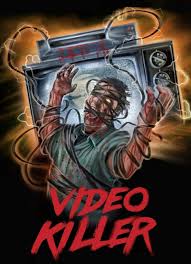 The cast also includes Henry Regan (Theo in The Secret Path and narrator of some of Mansfield’s animated shorts), Michael Lieber (Rancour), Jennie Fox (The Scared of Death Society, The Sickhouse) and Jenny Lee (whose scenes were shot by Mansfield’s husband Daniel). The three actresses were also all in Daniel Mansfield’s drag queen comedy You Crazy Bitch!

Wild Eye Releasing put out a US DVD of Video Killer in September 2016 and it is also available through Google Play. Richard’s next feature, in among his continuing work on animated shorts, should be Scare Bear while Daniel is in post on a thriller called Watch Me (not to be confused with this 2006 Australian film).