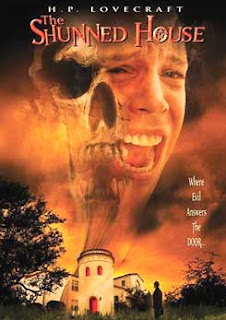 Ivan Zuccon, without a doubt the most exciting young genre director in Italy, has stuck with the works of HP Lovecraft for this, his third feature. But whereas The Darkness Beyond and Unknown Beyond were generically Lovecraftian, La Casa Sfuggita (co-scripted with Unknown Beyond writer Enrico Saletti) adapts three specific HPL short stories.

Rather than a straightforward anthology, however, Zuccon and Saletti have set all three tales in the same building, interweaving them to achieve a dreamlike sense of horror. So in the present day we have paranormal journalist Alex (Giuseppe Lorusso) and his sceptic girlfriend Rita (Federica Quaglieri) in an adaptation of ‘The Shunned House’ itself. Alex is investigating an old inn which has seen scores of mysterious, often violent deaths over the previous three centuries. Much to Rita’s displeasure, they are going to camp out in the derelict building until Alex has finished his research.

In the same building, 50-60 years earlier, Luigi Montella (Emanuele Cerman) is a young mathematician, who is investigating the non-Euclidean geometry of the inn’s plans and playing chess against his neighbour Nora (Silvia Ferreri). This part of the film is based on ‘Dreams in the Witch House.’ Finally, right back in the 1920s, a writer name Marco del Vespro (Michael Segal - not the British actor who was in I Claudius etc) becomes bewitched by the haunting violin music emanating from the next room, where lives the beautiful but mute Carlotta Zann (Cristiana Vaccaro). That’s ‘The Music of Eric Zann.’ 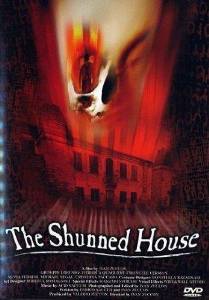 With three stories set in different times - perhaps more: who/what/when is that mysterious masked figure? - The Shunned House is not an easy film to follow, which is entirely in keeping with the complexities of Lovecraft’s work. Zuccon (who also edited the film) doesn’t just mix smoothly between stories; the whole point of the film is that these three tales interact, as characters from one time see/hallucinate those from another. It would be pointless for me to be specific; the film must be seen as a whole.

And there’s blood. And dead people. And people get killed in awful ways. This is a horror film in the grand tradition and confirms Zuccon’s place as the natural successor to Lucio Fulci. Luigi may be a somnambulist child-killer; Rita sees dead people; there’s a mysterious girl repeatedly hitting her bleeding forehead against a wall; and when Carlotta’s last violin string breaks... Christ, it’s horrible! It all comes together in a bloody, scary conclusion.

Zuccon’s camera, often roaming around a room, brings the audience right into the world(s) of these people. There is nothing workmanlike here. Every shot is just right: the angle, the movement, the lighting, the cutting. It’s just a shame that this was shot on video and not film. Please, someone give Ivan Zuccon the budget to shoot in 35mm! 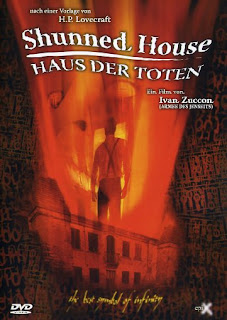 The cast all cope well with the English dialogue. Particularly notable are Cerman (also in both Beyond films, as was Segal) whose boyish good looks and sensitive-yet-unnerving performance reminded me of Brendan Fraser in The Passion of Darkly Noon, and Vaccaro, who overcomes (in fact, uses) her lack of dialogue to bring exceptional depth to her role as the troubled violinist. Massimo Storari’s make-up effects are as gruesome as ever, and kudos also to costume designer Donatella Ravagnini and set designer Roberta Romagnoli, and indeed everyone involved with this marvellous film.

Ultimately, what does it all mean? I’m not 100 per cent certain (and I’ve read the script!) but frankly the film wouldn’t be true to the Lovecraftian source material if I was. It is all (I think) connected with the mathematics of the inn’s design, thus putting The Shunned House into the tiny subgenre of mathematical fantasy horror, along with the brilliant Pi, the disappointing Solid Geometry, and a handful of other titles. I think that ultimately the building itself is ‘the monster’, much like The Fall of the House of Usher or The Shining. But I strongly suggest that you take any opportunity to see this film and decide for yourself.

MJS rating: A
(Warning: this film contains some scenes with strobe effects.) 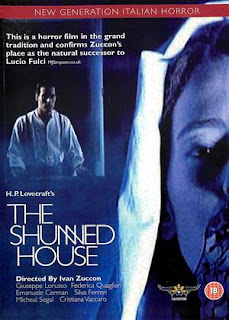 Addendum: The Shunned House is now available on DVD in the UK from Salvation. The disc includes an ‘original trailer’ (a short teaser), an ‘international trailer’, four short deleted scenes, a stills gallery and two essays by Salvation boss Nigel Wingrove. The one about HP Lovecraft is okay but the one about Italian horror is rather a waste, saying nothing about why the genre flourished in Italy or why horror fans hold spaghetti spook-flicks in such high regard. Also, the text of the essays is small and hard to read and, on my machine at least, flickers somewhat.

The extras are rather difficult to navigate and I found myself having to go back sometimes because of the confusing and inconsistent navigation system. (I know this is picky, especially as I was given the disc for free by Ivan, but it’s irritating and would be easy to solve for future releases.)

Also on the disc are trailers for The Bunker (which was written by Clive Dawson) and The Playgirls and the Vampire (an odd pairing of films!), a Jake West-directed video for a song called ‘White Slave’ by The Nuns (all gothic lesbian fetish vampires - quelle surprise!) and Philip Ilson’s rather dull short Blood.