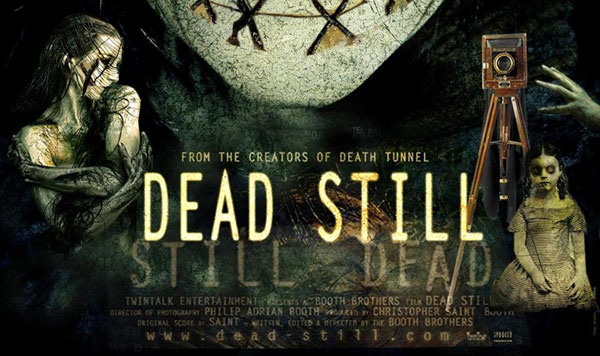 It would be wrong of me to suggest that Dead Still is, by any reasonable set of standards, a good film. I would be a damned liar if I implied that it is in any way scary or entertaining, or that it gripped me to any measurable degree. And I would certainly be bound for Hell if I were to let you believe, for just one moment, that anything in this film makes a lick of sense.

Having said all that…

Dead Still does at least have an original premise. And it is not insultingly stupid. And you know, there are precious few SyFy original movies that can tick both those boxes.

The idea of a haunted camera is a distinctly groovy one – and surprisingly unexplored. A quick google turned up only a series of three Goosebumps paperbacks called Say Cheese – and Die! So I was intrigued to see what writer-director Philip Anthony Booth could do with it. 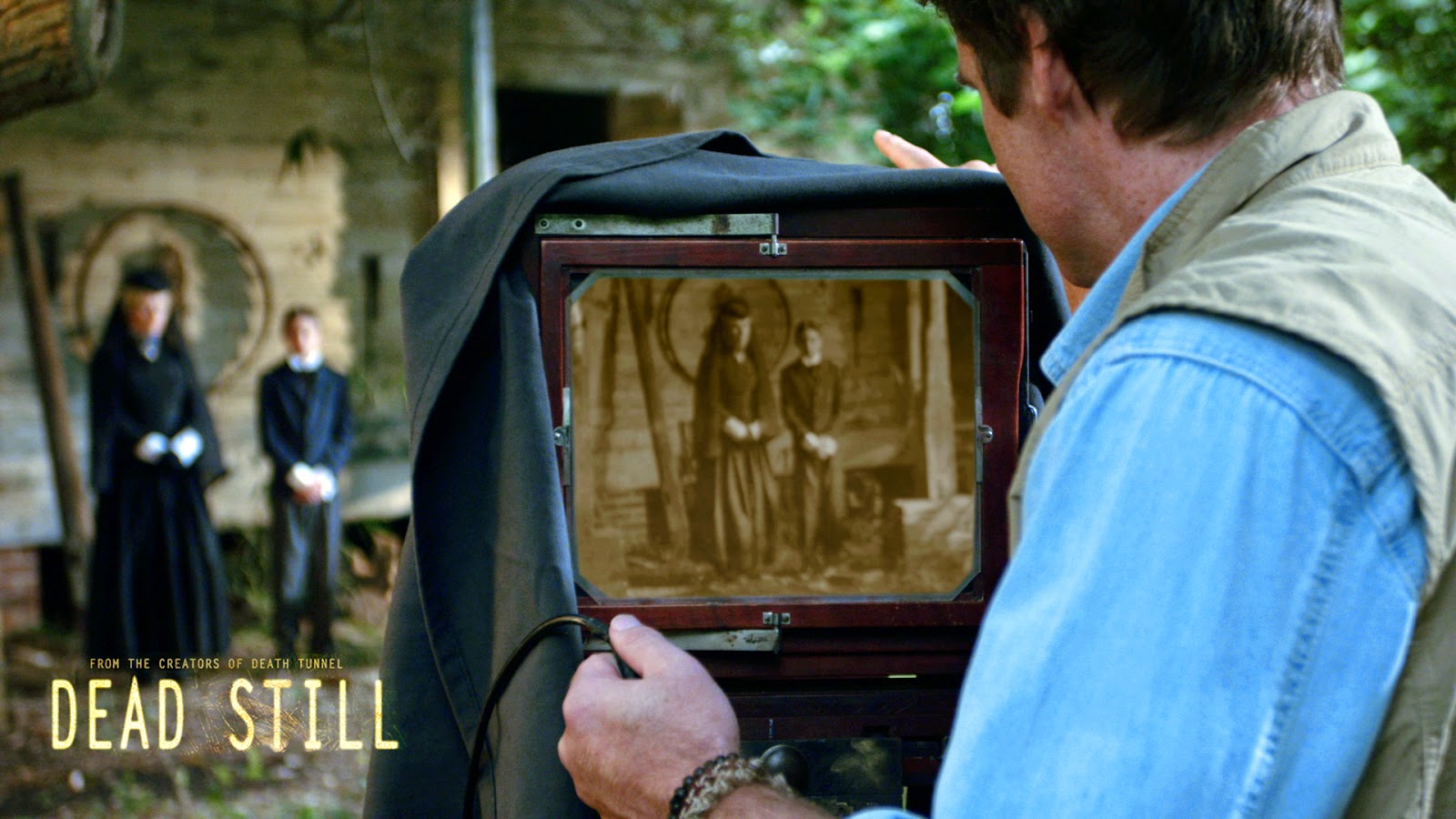 Apparently, what he could do with it is just knock it around with a baseball bat for a bit then throw it hard at a wall and hope that it somehow sticks in a way that creates a picture. Which it doesn’t. Dead Still clearly thinks it has some sort of narrative but really it’s just a random jumble of stuff, much of which either comes out of nowhere or goes nowhere. Or both.

Ben Browder, off of Stargate and Farscape, plays Brandon Davis, a jobbing wedding photographer who lives and works in a large, rambling shack that looks, from the inside, like a bunch of painted wooden flats in a film studio. When he was a kid, his father dropped him off somewhere and then crashed his car and died in a way that somehow traumatised Brandon, except it didn’t and that seems to have no bearing on anything at all in the story, except to explain why Brandon inherits his grandfather’s house directly.

In among the items in this creepy old mansion is an antique camera (and presumably a supply of unused glass plates – although we never see these or the large bag required to carry them around, possibly because the writer didn’t think it through). This camera – and indeed the movie - is concerned in some way with ‘death photography’.

Death photography was a real thing. There was a fashion in Victorian times to take photographs of the recently deceased, dressed and groomed and posed in a lifelike fashion. Child mortality being extremely high, even among the wealthy, this was a way in which families could preserve a memory of a dead baby or child. Often the parents or siblings would pose with the deceased, who might be arranged as if sleeping or resting, or propped up with some sort of brace. You can find some examples of death photography on the web and they are definitely very, very creepy. You can see why a horror film-maker might want to do something with this genuinely unnerving historical phenomenon. 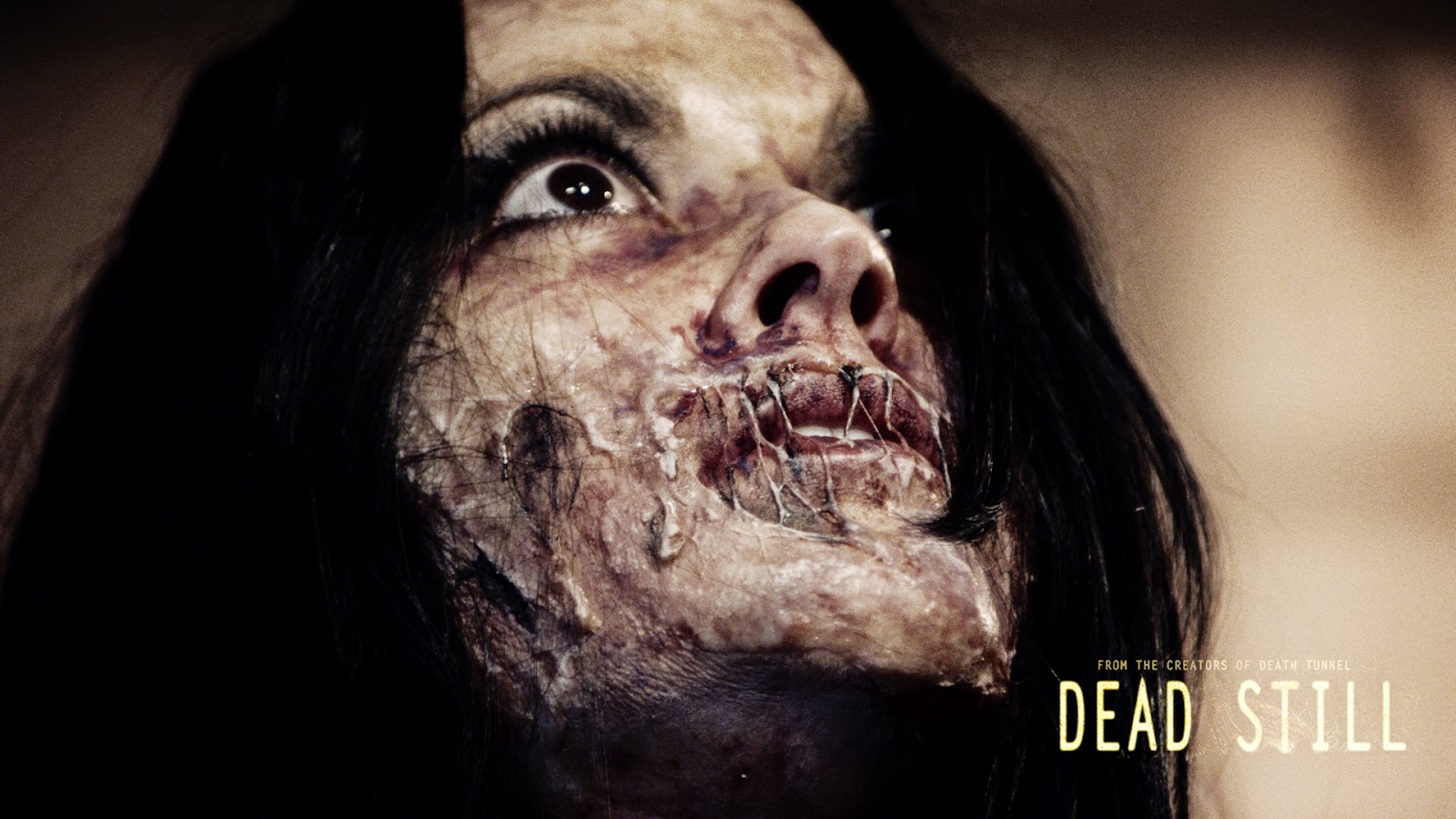 If only Philip Anthony Booth knew what he wanted to do with it.

It seems that Brandon’s ancestor Wenton Davis (Ray Wise: Swamp Thing, original RoboCop, Twin Peaks) was a celebrated death photographer, and this has somehow cursed this antique camera, which Brandon starts using to take both professional and family snaps, starting with a random homeless guy he drags in off the street. Because you would, wouldn’t you?

The pictures, which are hung up on strings in Brandon’s dark room, despite the fact that they ought to be on heavy glass plates, show the subjects as damaged, tortured souls, although this isn’t discovered - by Brandon’s goth girlfriend/assistant Ivy Monroe (Elle LaMont: Machete Kills, From Dusk Till Dawn TV series) – until after a newlywed couple and two of their guests have died in hideous ways. As indeed does Ivy. In a particularly stupid scene, Brandon comes home to find cops in his house who simply lift up a sheet corner and ask him if he knows the deceased. Yes, that’s what happens at murder scenes.

Wenton’s soul has somehow become trapped inside the camera, as some sort of punishment for the death photographs he took. Because, for some reason, instead of using real corpses, he photographed living people who were drugged to appear dead and, as a result, died. Some of these subjects suffered further: one is shown having large, visible clamps screwed onto his head so hard that blood dribbles down his face. Another is covered in leeches.

What the hell? The whole point of death photography was to make the dead appear to be still alive. What was Wenton trying to achieve by making living people appear dead? What did he actually achieve, apart from killing them in the process, thereby rendering the whole thing moot? What the hell is going on, and why? 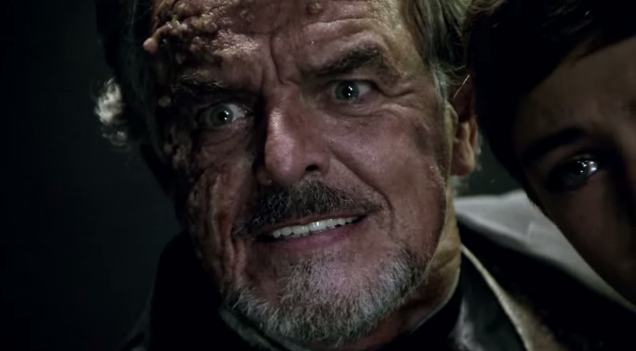 Brandon is separated from his wife Jenna (Carrie Lazar: Gingerdead Man 3) and they have a curiously effeminate eleven-year-old son Bobby (Gavin Casalegno: Noah) who is mute and converses in a Stephen Hawking voice via a speak’n’spell app on an iPad. When Bobby is alone with the camera, he is tricked (presumably by the ghost of Wenton, who is inside the camera) into standing in front of the lens. The camera takes a photo by itself which sucks Bobby inside it, into ‘the negative zone’. Which is not in any way, manner or respect actually negative. It’s not filmed negatively, nothing is the wrong colour or back to front or anything. Just one more random idea thrown into the mix without any thought or planning.

Meanwhile Brandon has gone back to his grandfather’s house where he finds a strange young woman (Natalie Mejer) lighting candles around a quasi-Satanic symbol on the floor. She tells him what is going on, because she knows, because she is a direct descendant of one of Wenton’s victims, who died when she was a little girl, which doesn’t make any sense or anything. Seriously, what the hell? And who is she anyway? And how did she get in? And why?

Brandon then somehow gets himself inside the negative zone where he somehow rescues Bobby from the clutches of Wenton, along with the Victorian girl (Evelyn Boyle: Sorority Horror House) who was the strange woman’s ancestor who is alive in there. Whereas the rest of Wenton’s victims are dead and are now represented by a completely random selection of admittedly nasty and creepy horror make-ups. 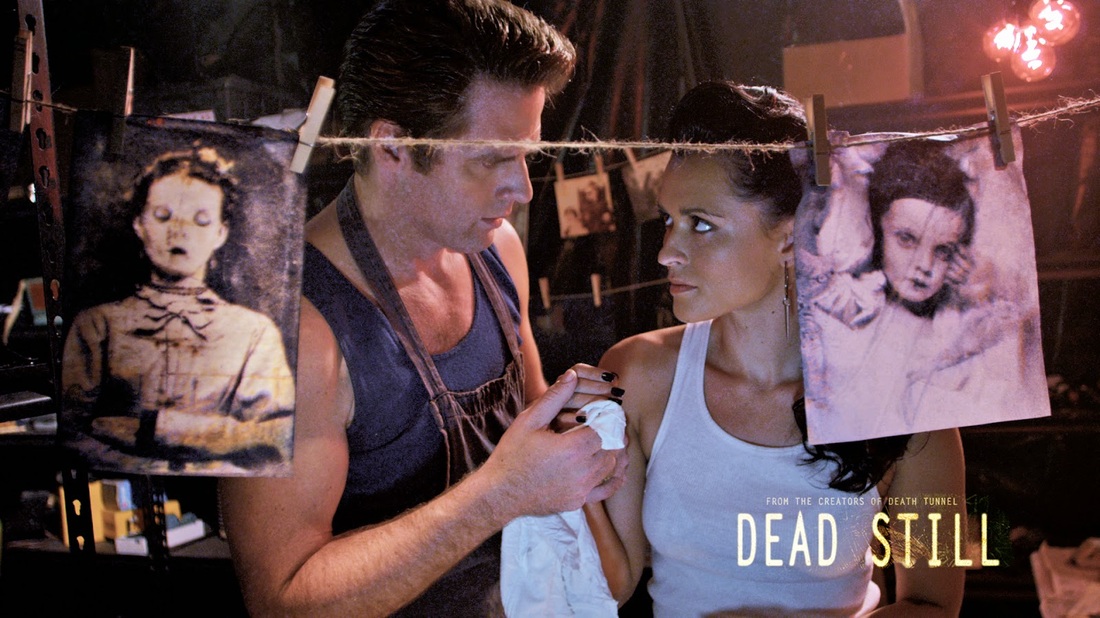 Seriously, absolutely not one thing in this film makes any sense at all. I haven’t even mentioned Professor McKlaren (Eric Ruff, overacting so much you wonder whether he took the role for a bet), an old tutor of Brandon’s who is writing a biography of Wenton. Ivy meets him in an antiques shop where he is also a customer, then later breaks into the shop after dark to speak with him (so, what, he owns the place now?). But he’s not there, but then he is, and later he is possessed by the camera (which he has never been within half a mile of) and starts chopping his fingers off with a cigar cutter.

What. The. Absolute. Fuck.

Let’s also chuck into the mix not one but two scenes where people open padlocks by simply sticking a straight bit of metal into the keyhole and waggling it a bit. And the camera, or possibly Wenton’s ghost, possessing Bobby’s iPad and making it say creepy things. And the movie’s obsession with the word ‘destiny’. And spooky voices everywhere saying, "Memento mori." And, and, and… oh I give up.

Dead Still takes an original, intriguing, historical, creepy concept and totally pisses it up the wall with a mishmash of random horror ideas that only intersect when they take the trouble to contradict each other.

Not helping matters is Booth’s directorial style which is jumpy and jittery and so packed with micro-flashbacks to things either before the film or previously seen that it would be almost impossible to follow what was going on even if something coherent was actually going on. Seriously, this is such a pip-packed pomegranate of flashbacks that I would estimate at least 10-15 minutes of the 85-minute running time is stuff we have already seen, jarringly inserted into the film to remind us that we already saw it about 20 minutes earlier.

Philip Adrian Booth and his identical twin brother Christopher Saint Booth are ‘the Booth Brothers’, a film-making duo who have between them crafted a dozen or so previous features including Children of the Grave, Soul Catcher, Death Tunnel, Ghouls Gone Wild, The Exorcist File, Children of the Grave 2 and a bundle more you haven’t heard of either. Posters for a couple of these are on the wall of Brandon’s apartment because, why not. Alongside writing and directing (I use both terms loosely), PA Booth handled cinematography, editing (with Adam Michael Johnson) and digital effects. CS Booth was one of three producers and was also responsible for the production design, which is pretty much painted hardboard flats throughout, even in the negative zone, some of the costume design and the music. In fact, he’s quite an experienced composer, having spent the 1990s providing soundtracks (under the pseudonym ‘Saint’) for pornos including a couple of Ginger Lynn Allen lingerie videos and a Traci Lords workout vid (!). I have actually seen at least one of the titles on his filmography, an Asia Carerra flick from 2000 called Search for the Snow Leopard. It had a wafer-thin narrative about women turning into cats when they weren’t having sex (or something), but it still made more sense than Dead Still. 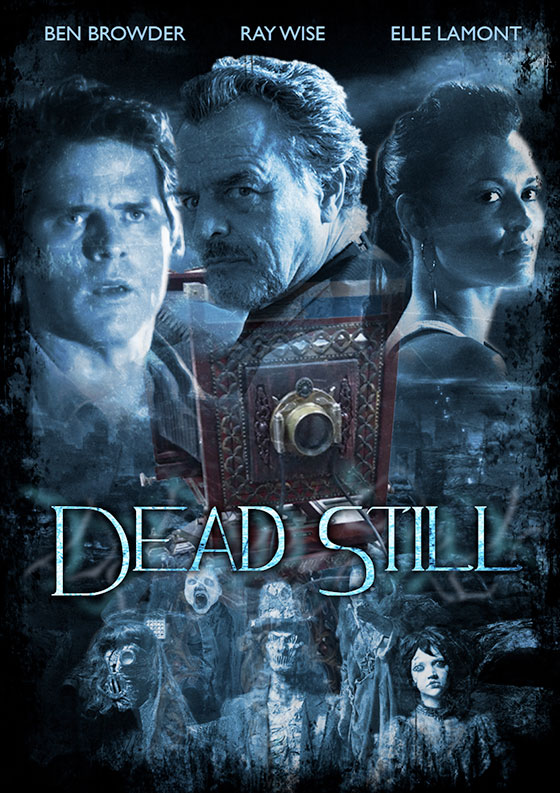 Ben Browder, who was also in that Doctor Who western episode, is one of a small army of producers, variously executive, associate and co-. The cast also includes Steffie Grote (House of the Witchdoctor, American Vampire), Han Soto (Ghost Shark, Ender’s Game, Fantastic Four redux) and Corey Mendell Parker (Spider-Man, Scream 2) plus two boys credited as ‘Bully #1 and #2’, suggesting there’s a cut scene somewhere of Bobby being teased. I know characterisation is important but seriously, that’s not what this movie needed to save it….

First broadcast in October 2014, Dead Still was released to VOD in February 2015 but is not yet available on DVD anywhere. Some people might enjoy it: Ben Browder fangirls will wet their pants and undiscriminating gorehounds will relish some surprisingly gruesome deaths. But none of them will have a clue what's going on. Because neither did the writer-director.

There’s a terrific horror movie waiting to be made based around the idea of death photography. But this ain’t it.

Email ThisBlogThis!Share to TwitterShare to FacebookShare to Pinterest
Labels: 2014, USA