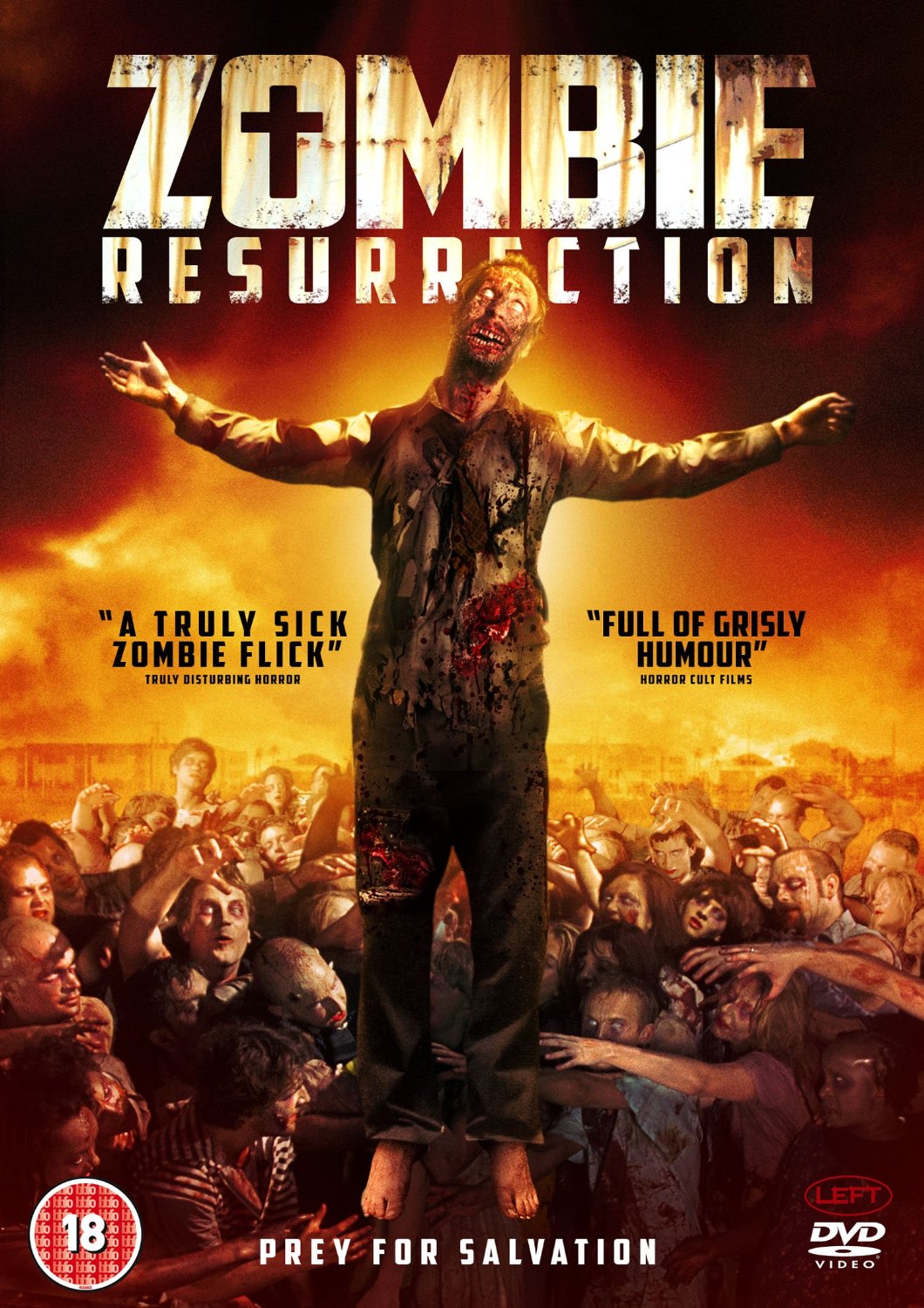 Every week there’s a new zombie film. Many of them are pretty much identical. Some of them are completely new and take the subgenre in different directions. Others are the standard zombie picture but with one distinct selling point. Zombie Resurrection falls into the third category, in that the bulk of the film is yet another motley collection of survivors trying to continue surviving, who then discover something new, but what they discover is something original that you won’t have seen in any previous zombie film (I think).

In any movie like this, the strength of the picture is the characters and the relationships between them. Zombie Resurrection does a great job here, somehow managing to introduce us to eight characters at the start of the film without leaving us confused. (There is a pre-credits sequence but it’s kind of dark and what I could see didn’t seem to relate to the main story so I’d skip over that if I were you.)

So: roll call. The nominal leader of the group is Major Gibson (Joe Rainbow: Stag Night of the Dead, Sisters Grimm, Night Junkies), a young officer in the TA (or whatever the Terriers are called now) who is, not to beat about the bush, an officious little twat. Outranked, but far more practical and pragmatic is foul-mouthed Glaswegian brick shit-house Sergeant MacTavish (Jim Sweeney: Idol of Evil). 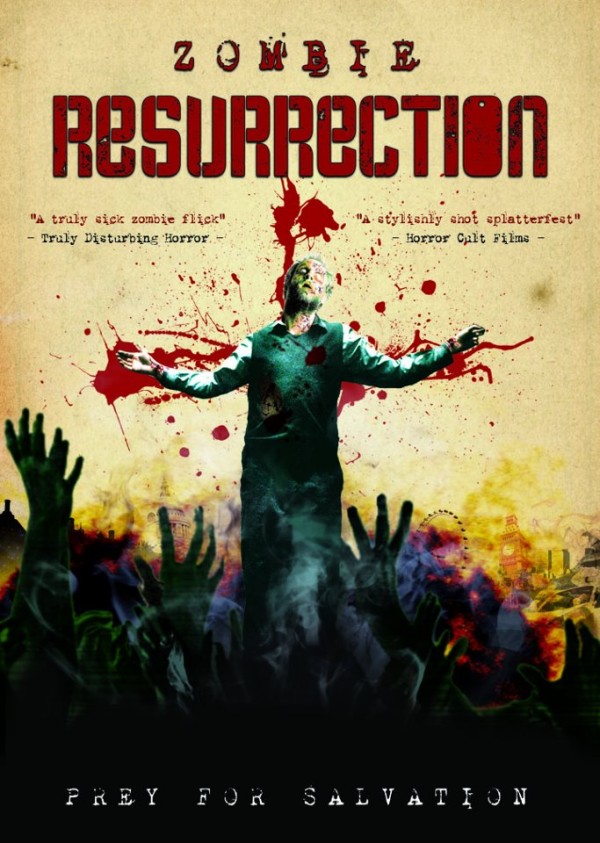 Beaumont (Danny Brown) is a respectable middle-class family man with taped spectacles and a handy golf club, who keeps a protective eye on his teenage daughter Becca (Rachel Nottingham). As well he should because opportunist wet blanket Gandhi (Simon Burbage: Extinction, Tear Me Apart, Torn: A Shock Youmentary) has his eye on Becca too. Harden (Jade Colucci aka Jade Gatrell) is a potty-mouthed chav with a positive attitude who has formed an unlikely alliance with Beaumont and is therefore a sort of surrogate mother to Becca.

Then there’s Esther (diminutive, Zimbabwean Shamiso Mushambi), a heavily pregnant evangelical Christian given to explaining the apocalypse by spouting scripture (which, you know, almost makes sense). Finally there is Dr Sykes (Eric Colvin: ‘The Man’ in Adam Mason’s Broken), one of the scientists who created the virus that caused the zombies in the first place. He is being transported as a prisoner, in orange jumpsuit and chains.

This group of unlikely bedfellows are making their way across Britain on foot, heading for ‘Imperium’, the largest of the protected settlements which have been built up since the zombie virus destroyed civilisation about 15 months ago. Gibson is convinced that once they get there, Sykes will hang.

The zombies themselves are pathetic, in a literal sense. Emaciated, shuffling things which can be fairly easily destroyed with a well-aimed blow to the head, they don’t present much problem to the team and are colloquially referred to as ‘shitsacks’. A bite from one is still fatal, but it's pretty easy to avoid that bite under most circumstances. 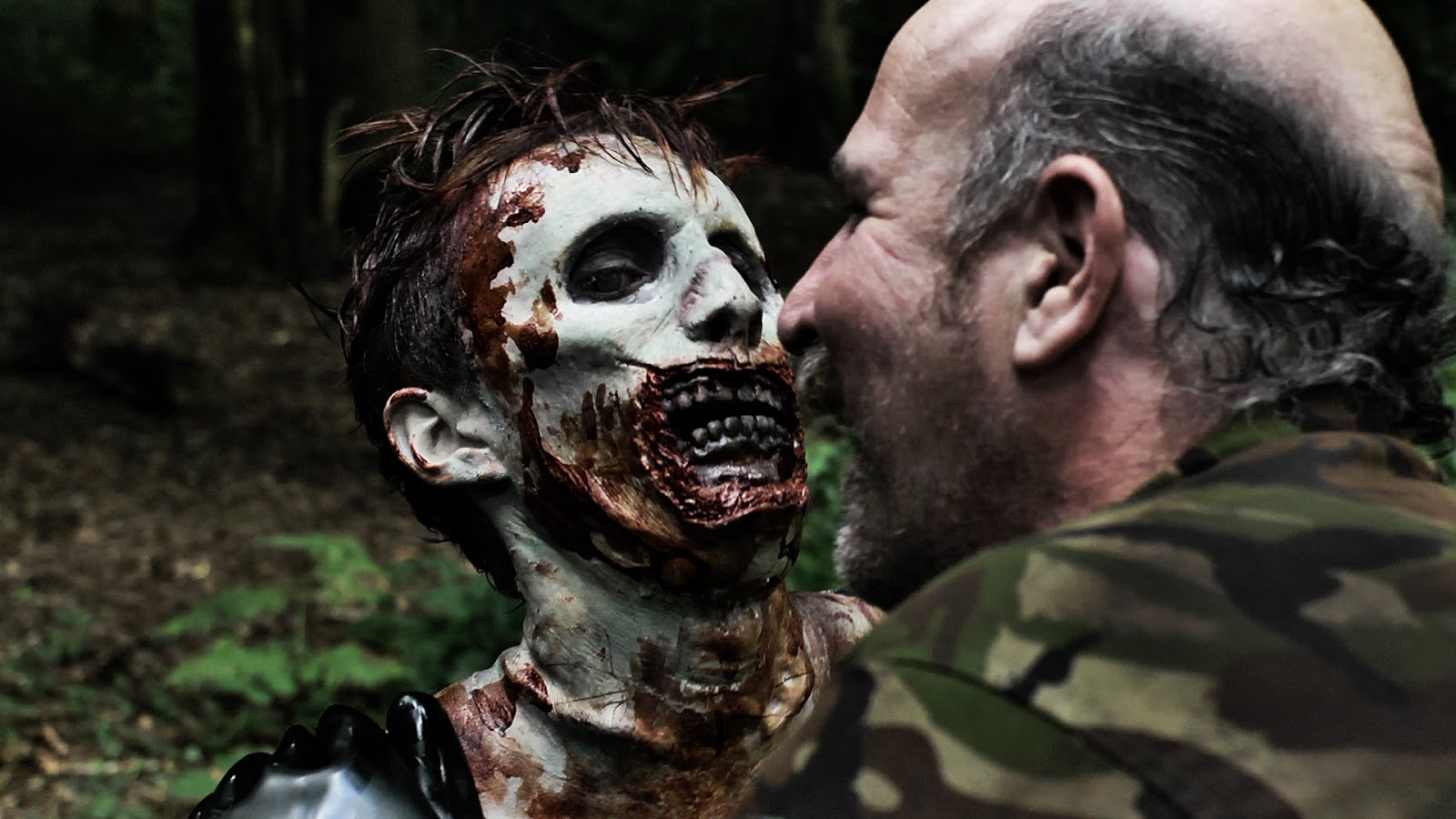 When one of the group sustains a serious injury, they take temporary refuge in an abandoned school, which is where they encounter the first ‘fresh’ zombie – fast-moving and deadly – that they have seen for a long time. Sykes estimates it was turned less than a day ago. Further investigation reveals a large crowd of zombies, milling around a single male zombie who is some sort of zombie Jesus (Rupert Phelps), capable of bringing people back from the undead.

Now, truth be told this whole ‘zombie resurrection’ schtick (hence the title, which you might otherwise assume was just a generic phrase) is explained much more clearly in the synopsis on the film’s website than it ever is in the movie itself. I could get that the special zombie was special, and that some of the team witness a zombie turning back into a person, but the details are a bit vague. A female survivor located within the school (Georgina Winters, who had a bit part in Jupiter Ascending) is, I guess, supposed to fill us in on what’s happening but, again, what I learned about her from the online publicity was significantly more than I got from the actual film. 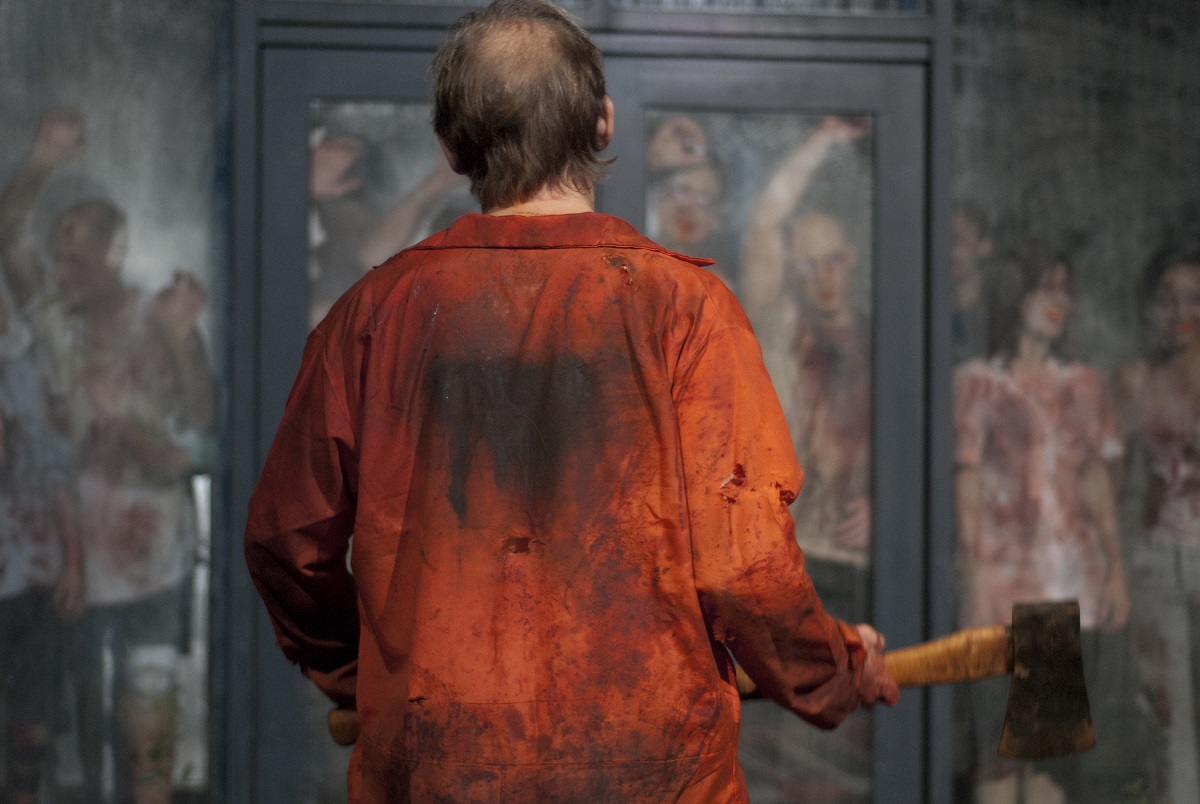 It’s clear that Jake Hawkins and Andy Phelps have worked out something clever and original here, but they’ve been a little too obtuse in showing that to the audience. Not to worry, because Zombie Resurrection is nevertheless a tremendously entertaining picture. The first half is darkly comic with some genuine laugh-out-loud moments. Later on, as members of the team start to fall away, things get a bit more serious, but the transition is smooth and effective.

Solid acting from all concerned makes us care about these people (even Gibson) and skilful direction keeps the story flowing as the character development, ah, develops. We are told enough about the post-apocalyptic world to understand what is going on, but not so much that we get laden down with back story.

Zombie Resurrection is the debut of Phelps and Hawkins who share ‘directed, produced and written by’ although Phelps alone is credited with ‘screenplay’. Hawkins was the DP, a role he previously handled on a micro-short called Zombeez. Robbie Drake (The Seasoning House, Cockneys vs Zombies, Evil Calls) designed the prosthetic make-up which was applied by Heidi Clarke. The cast also includes Kate Korbel (File Box, Piggy) and Ian McIntyre (who was in an episode of Red Dwarf) plus P&H themselves among the zombies. Several BHR names get thanked in the credits including Johannes Roberts and Jim Eaves.

I can honestly say that I really enjoyed Zombie Resurrection. In this day and age one tends to have low expectations for zombie pictures, especially if they have such seemingly generic titles. Consequently, when one encounters a well-written, well-directed, well-produced feature with some original ideas, interesting characters and a solid mixture of fun and thrills, it’s a pleasant surprise.