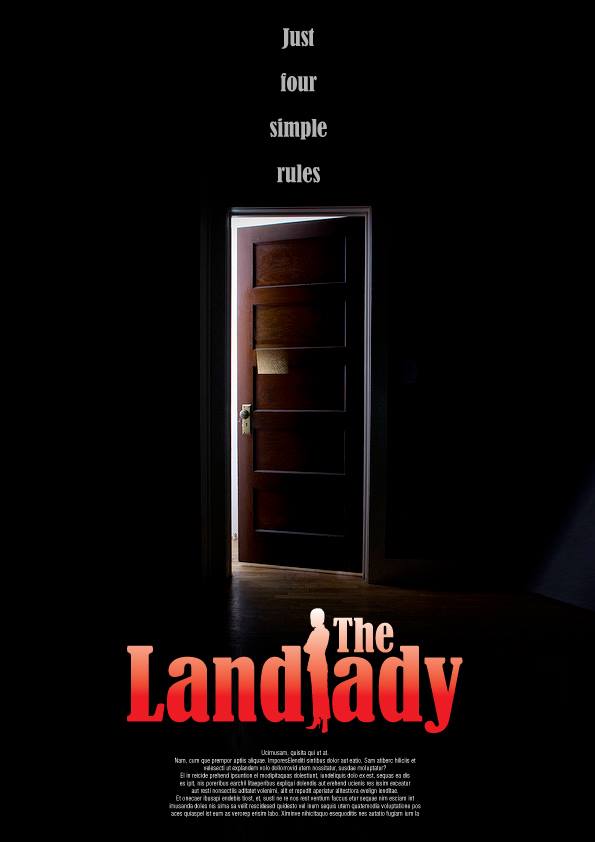 The Landlady (not to be confused with The Landlord) is a bit of fun, a British horror bagatelle with an EC Comics vibe and the name value casting of Bond/Hammer hottie Caroline Munro.

Last time I saw Ms Munro was at the Festival of Fantastic Films a few years back when I spent a pleasant evening chatting with Caroline, the equally lovely Martine Beswick (who also ticks the boxes marked JB and HH) and suave, debonair filmmaker-about-town Mark Redfield. Caroline’s great: she strikes that balance of accessibility that can be so hard for those who were stars in earlier decades. She’s not reclusive yet not so ubiquitous that attendees at film fairs and horror conventions think, “Oh gawd, she’s here again.”

Plus, of course, she’s still a fine looking woman. And damn good company. And what’s more, she’s evidently prepared to help out indie film-makers by giving their projects that all important name value. In the past couple of years she has filmed roles in two Toni Jopia pictures - Crying Wolf and Cute Little Buggers – and this short for Rory O’Donnell and Jason Read of Robo Films. 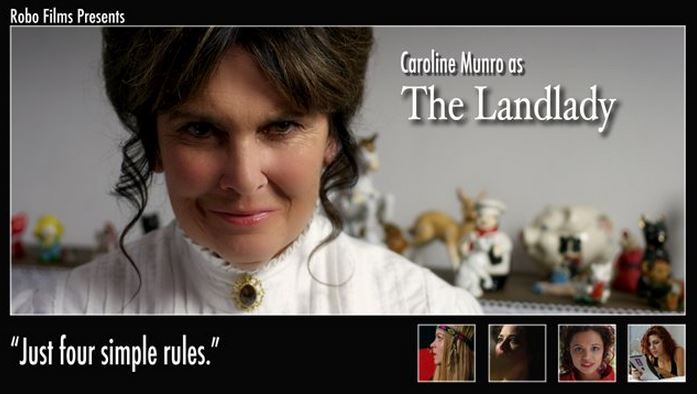 Despite running a mere 25 minutes, The Landlady is an anthology: four vignettes set across four decades, in each of which a young lady takes a room in the lodgings of the unnamed title character, played with starched Victorian primness by Caroline. There’s a hippy chick in the 1960s, a punk in the ‘70s, an ‘80s babe and a present day girl. The 1990s and 2000s have been skipped over, which is reasonable because they were spectacularly bland decades devoid of anything memorable or iconic.

Each segment is structured the same way. The Landlady listens to classical music on her antique wireless, then finds another station playing some modern rubbish. A young woman arrives, suitcase in hand and is shown up to the room. There are just four rules in the house, explains CM: no smoking, no loud noises, no pets and no company after midnight.

Each new tenant makes herself at home and promptly breaks one of the rules, quite deliberately. After which, the Landlady puts one of her little magic figurines into the room which enacts supernatural revenge on the miscreant.

Without giving too much away, the first two girls are compelled to do something to excess which kills them, creating expectations that the others will suffer a similar fate but in fact girls 3 and 4 are delivered of more obviously fantastical punishments. Each death is sort of connected with the rule that was broken, but to varying degrees. There are some anachronisms, unavoidable at this micro-budget level (you certainly couldn’t get cider in ring-pull cans in the 1970s!) but that would be picky. The whole film is slightly mannered and is in no way aiming for realism.

Fun though it is, and undeniably well-made and smartly directed, the main problem with The Landlady is that there is no progression and hence no pay-off. The four segments were posted individually to YouTube over the course of a week in December 2013, with the full version following a couple of days later. At the end of Part 4, we are in exactly the same situation as we were at the end of Part 1. Nothing, decade aside, has changed. There’s no twist and no punchline. What the film really needed was a final segment which confounded our expectations by being different to the others.

What it could have done was have the 2013 lodger follow all the rules, not because she’s honest and polite and well-behaved but because young people today are so bloody boring. That would leave the Landlady herself, who never changes her appearance in 50 years and is presumably some sort of supernatural entity distributing overzealous, righteous justice to the badly behaved and inconsiderate, stuck with a lodger she can’t actually get rid of. Structurally that’s what a story like this needs: the tables turned in an unexpected, ironic way.

Well, that’s what I would have done.

Jason Read and Rory O’Donnell shared the directing gig, with the former helming Parts 1 and 2 and the latter taking over for the home stretch. O’Donnell wrote the screenplay, going halves on the story. The four tenants are, in chronological order, Marian Elizabeth, Zoe Grisedale (Bloodshot, The Thompsons), Gina Jones (who was in a DirectGov advert and a Comic Relief ident) and Sarah-Jane Howard. Their friends include Richard Ochampaugh (Three’s a Shroud) and Holly Rivers who was Drusilla in The Worst Witch.

Cinematographer (and good hand at scrabble) Zoran Veljkovic (Tales of the Fourth Dimension) shoots the picture well within the very constrained situation of basically a stairwell and a bedroom. And I was particularly impressed with the sound: recordist, Tomo Davies; editor, Alistair Lock.

The IMDB says he worked on a bunch of Doctor Who spin-offs including Shakedown: Return of the Sontarans directed by my mate Kevin Davies, who was also involved with the Illustrated Hitchhiker’s Guide. Plus I’ve just watched a clip on the Robo Films YouTube channel of Rory O'Donnell directing Sophie Aldred in their next film, The Sitter, and reminiscing about the time they worked together many years ago aboard HMS Belfast, which is where Shakedown was shot.

Eventually I resorted to Google where I located the answer in – oh irony – the Googlebooks cache of my own first book The Pocket Essential Hitchhiker’s Guide. Before The Illustrated Hitchhiker’s Guide was produced (it was the big silver hardback with digitally done photo stuff that was wow back then but can now be done by eight-year-olds on an iPad) a test photo was taken of Simon Jones and David Dixon, from the TV series. Except that Simon was unavailable so Kevin asked Alistair Lock to stand in. And that’s where I know him from. Bloody hell.

I also liked the music in The Landlady, which was overseen by Jason Read. I particularly enjoyed the drum solo version of In the Hall of the Mountain King. 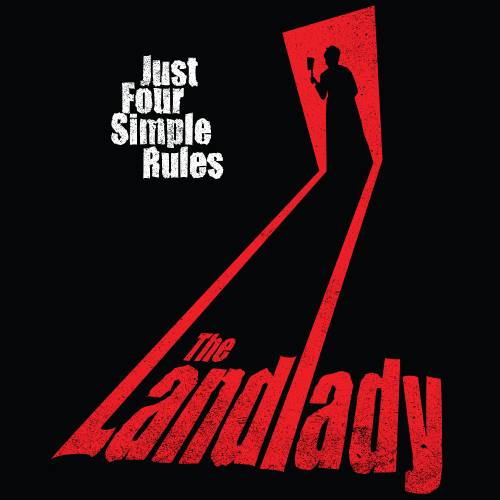 Rory O'Donnell has a bunch of casting director credits including BHR entry The Last Man and a recent feature called Little Deaths which confusingly isn't this one. He also runs training courses for Raindance. Jason Read has directed a bunch of music videos etc. Inbetween this and The Sitter he made a horror short called Face Book.

Shot over four days in August 2013, The Landlady premiered at the Misty Moon Film Festival in London on Halloween that year. In January 2014, the film had a second big-screen outing as half of a Caroline Munro double bill, paired with 1980s daftness Slaughter High, at a one-day horror event in Bournemouth also attended by Emily Booth. Robo Films also pressed up a bunch of DVDs in February 2014 for those people who had funded the film on Indiegogo.

So: lots of fun and a nice little aside among the barrage of features which I have to plough through every month.