In October 2002, a couple of years after my big interview with Ted Elliott and Terry Rossio, Terry kindly agreed to answer a few quick questions in a follow-up mini-interview just as they were starting work on the first Pirates of the Caribbean movie.

How has the success of Shrek (and your BAFTA) affected your standing in Hollywood?
“Our standing is about the same - we've had hit films before, even number one films before. Hollywood usually treats writers well; it's the writing itself that gets trampled on. It remains to be seen whether that will change.”

What aspect of Treasure Planet are you most pleased with?
“I'm most pleased that Ron Clements and John Musker finally got to make the film they wanted to make for fifteen years, and that it turned out to be an astonishingly beautiful and powerful work of art.”

What aspect of Pirates of the Caribbean are you most looking forward to?
“Maybe nobody noticed, but we were allowed to write a big budget summer movie that's mostly about character, with room for people to tell stories, and with fun roles for secondary characters, just like in the old days. If that stuff gets through all the way to movie screens, we will have accomplished something great, in this era of non-story blockbusters.” 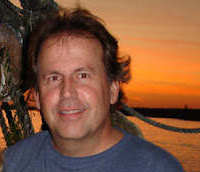 To what extent did having written one SF/fantasy Disney pirate movie contribute to you getting the job on another SF/fantasy Disney pirate movie?
“I can honestly say - none. We wrote the first draft of Treasure Planet in 1992 for the animation department. Pirates of the Caribbean was written in 2002; I don't think anyone associated with Pirates knew about Treasure Planet. Oddly, we also worked on the Sinbad movie at Dreamworks (that was around 1998); it's pure chance that the three pirate pictures are all being released within seven months of each other.”