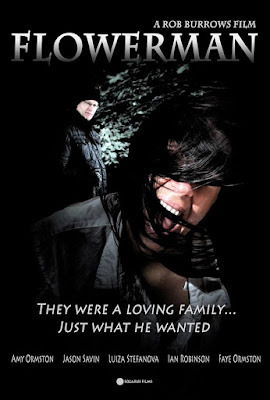 This suprisingly nasty psychothriller starts out inoccuously enough, introducing us to Amy Ormston as Sarah and Ian Stewart Robinson as her husband Andrew. They’re blissfully happy, married with two kids (Mark Burrows and Ellie Ormston) who love their parents as much as the parents love each other. The first 10-15 minutes really lets us know how warm and loving and supportive and happy this family is. To be honest, it makes you sick.

But we signed up to watch a horror movie, so it ain’t gonna last. So that's alright.

Sarah works in a flower shop where one of her regular customers is Nigel (Jason Savin) who couldn’t be more obviously villainous if he twirled a waxed moustache and said, “I’ll get you, my lovely!” Still, there are people who look villainous and then there are stone-cold sociopathic sadist nutjobs. And that’s Nigel. 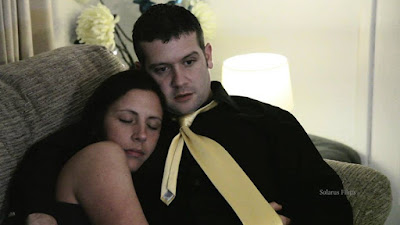 First he breaks into Sarah and Andrew’s home and steals a few personal items, making sure to dress entirely in disposable overalls and overshoes. Very careful and methodical this one. Then he kidnaps Sarah and whisks her off to his farm outside town where he chains her up, cuts off her clothes and forcibly tattoos her with his name and the name he thinks she should have: ‘Wendy’.

Over the course of the film, Sarah will be abused and humiliated by this psycho, who flips between hammy explanation and brief surges of savage anger. It’s an interesting performance by Savin, reined in just this side of pantomime villain and all the more scary for it. But what really sells the film – especially given that some of the supporting cast are, well, not great – is Ormston as Sarah.

We really feel her terror and her pain, her loneliness and her broken will. It’s a belter of a performance, it really is: utterly credible and utterly pathetic in the truest sense of the term. But where many films about men torturing and abusing women are misogynist trash, Flowerman is much more sensitive and astute. This is a film about the suffering of the victim, not the power of the abuser. 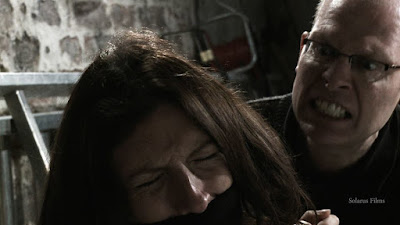 And abuse of power is definitely the theme here. Nigel has warped plans to force Sarah to marry him. He sends texts from her phone to Andrew, saying she has left him. They even get as far as a solicitor. Nigel has Sarah’s passport from that earlier robbery, and she is so under his control by then that she can only meekly agree to his promptings.

Even when, later on, she does manage to effect an escape, Sarah is still terrified of Nigel and convinced, as abuse victims often are, that it is somehow her fault. So although she makes it as far as the house of a helpful Polish prostitute (Luiza Stefanova), she doesn’t call the police. Some commenters find this action unbelievable. They need to learn a bit more about manipulative abusers: not every woman is Sarah Connor.

What of Andrew? He is sure that Sarah would never leave him but the two coppers investigating the case (writer-director-DP-editor Rob Burrows and Emma Marshall) think it’s just a domestic disagreement and that Sarah has simply walked out on him. This idea is supported by a neighbour (Denise Burrows) who is convinced that Andrew is having an affair with a work colleague, Jenny (Faye Ormston). The irony is that he wasn’t - but he is now. Jenny has been carrying a torch for Andrew for some time and swiftly makes her move, becoming a surrogate mother to the kids. Nevertheless, Andrew still loves Sarah and is convinced all is not right. 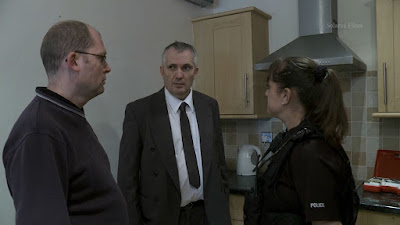 By the third act, three people have been brutally murdered by Nigel and he plans to destroy Sarah’s will even further by making her watch as he kills her family. Clearly by this point he has crossed a line – I mean a line much further along than the one he crossed by initially kidnapping and abusing Sarah. Something will stop him, sooner or later. The resolution, when it comes, is somewhat out of nowhere but not completely deus ex machina and the film just about gets away with it.

Flowerman is one of those movies that begins unpromisingly but picks up when it starts getting very nasty, not because of any salacious appeal of gender-based violence but because Sarah represents abused women everywhere. It’s not her actual husband abusing her, but it’s a man who thinks he is her ersatz husband and can become her real one. Nigel's obsession manifests itself first in stalking – he has a wall of photos he has taken of Sarah – and then in a belief that he can force her to love, honour and obey him through violence and intimidation. She, as far as he is concerned, belongs to him, body and soul. Thematically therefore this sits with The House of Him and The Devil’s Vice in the ‘domestic abuse as horror’ subgenre. 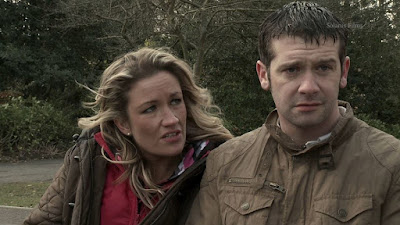 The movie is not without its faults, principally some wooden acting (it’s never a good sign when so many of the cast share surnames) plus it’s too long at 97 minutes. We don’t need the top’n’tail scenes of Sarah writing the story longhand in a book, and a subplot about Nigel’s brother (Richard Batey) goes nowhere and serves no real purpose that I could see.

The other problem is the accents. Every single character speaks with a really strong Northeastern accent (it's actually set in Durham, according to the on-screen police cars) and there were several moments when I literally had not a clue what was being said. The only exception is Stefanova, but her Polish accent is just as thick! The version I watched (on TubiTV, free but with adverts) had close captioning but it was out of synch with the image by about a minute so not really much help. 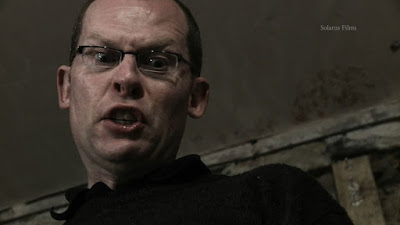 Flowerman won two awards at the Tenerife International Film Festival in July 2015 and also played Milan in November of that year, with an R2 DVD in December. The actual first release was across various VOD platforms in March 2014. This was Burrows’ third feature after Dead Frequency and Entwinement, and he has since made a fourth, Temporal. Several of the cast were in those other films, as well as Warren Speed’s Coulrophobia and also The Legend of the Chained Oak, a half-hour horror short from Mark Mooney and George Watts.

Powerful enough to overcome its shortcomings and with some genuinely horrific moments, yet rooted in solidly British domesticity, Flowerman is certainly worth a watch.