The Rise of Jengo 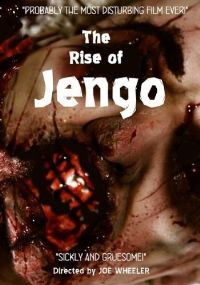 The Rise of Jengo is an extraordinary film, a film you really should see if you have a genuine interest in contemporary British horror cinema. This is not, however, a film for everyone.

Multihyphenate (or, if you like, one-man band) Joe Wheeler writes, directs, produces, photographs, provides effects and music – the whole bit. He also stars (as ‘Jake Weaver’) and really it is his incredible performance which makes this film so essential and fascinating.

Jake is possessed by a demon named Jengo. When Jengo takes control, Jake brutally murders people, wearing a mask made from the face of an earlier victim. And to be honest, that’s about it as far as narrative goes. This isn’t a film about plot and it’s certainly not a film about dialogue. For much of the time, Jake/Jengo/Joe is alone on screen (or shares it with a terrified, screaming victim). He grunts, he screams, he howls, he laughs, he cries, he leaps around, he screams some more. Really, this is the most amazing, intense performance I think I’ve ever seen in a low-budget horror film.

There’s no hint of embarrassment or reticence, but there’s also none of the theatricality that one might get from a professional ac-tor. Wheeler simply throws himself heart, body and soul into portraying an insane, amoral, violent lunatic. It’s powerful and disturbing and alarming and everything that good horror should be.

Jake/Jengo kills a plumber who comes to check the boiler. He kills a couple of ghost hunters invited round to the flat because of mysterious happenings. He kills a woman who comes for a photo session. Each in turn arrives at the flat, is let in, then finds themselves attacked from nowhere by this British Leatherface. All of this happens against a continuous soundtrack, ranging from choral to industrial, polyphonic to atonal, which barely lets up and drags us even deeper into the nightmare scenario on screen. Wheeler himself, hence also Jake, is shaven of head and baby of face; in scenes without the mask his innocent expression (among splashes of blood) makes the violence and screaming, demented anger all the more scary.

At some point amid the mayhem we have to take stock and ask the $64 million question: is any of this real? Is Jake really possessed, or is he an extremely disturbed young man with major mental health issues, acute schiozophrenia manifesting itself through extreme violence? Well, you can ask this all you like. You won’t get an answer, and that’s one of the film’s greatest strengths.

Jake shares the flat with his girlfriend, Jodie (Natalie Graham), who reveals herself, about half an hour in, as a Satanist who has summoned Jengo and conditioned the hapless Jake to submit to the Demon’s possession when triggered by key phrases. But does this really happen? Is Jodie actually one of Lucifer’s acolytes or is this sequence the product of Jake’s disturbed imagination, finding a rationale for his behaviour? Jodie disappears during the middle act but reappears near the end when her sister comes to stay. Eventually Jake and his sister-in-law flee to Mexico after having killed three police officers. But an epilogue sees Jake wake from a nightmare back in the flat.

What is reality? What is Jake’s reality and what is real reality? Is Jodie’s admission real? Is Jodie even real? Are any of the killings real? We’re left to make these decisions for ourselves. There are no easy answers here. The Rise of Jengo is a unique movie and one that you won’t easily forget.

Well, I say unique but actually, as far as I can tell, this is a remake of Wheeler’s first feature The Evil Outside Your Window which was self-released on DVD in October 2010. The Rise of Jengo was shot in September/October 2011 and swiftly released in December. Wheeler sold the disc through a now defunct website and also posted a lo-fi version online, which can still be viewed at archive.org. To be honest, the lessened quality ironically works in the film’s favour, in my opinion. The photography is a mix of close-up handheld shots that waver in and out of focus, and a few locked-off tripod shots where the focus is fine but obviously the framing is subject to the vagaries of the actors’ movements. Both of these are deliberate artistic decisions and both work, helping to disorientate the viewer. So a small, soft image doesn’t actually make me want to see this larger and clearer. (A one-off theatrical screening in December 2011 was announced but I'm not sure whether it actually happened.)

At the end of 2013 Wheeler remade the film a second time as Jengo Hooper, expanding on the idea to provide a framing story of Jake Weaver locked up in a mental hospital, further blurring the waters regarding whether this is a tale of demonic possession or mental illness (or indeed, both). This actually played a festival in November 2014 and picked up a couple of awards. The DVD is available from the director’s website, and the film is also available VOD via Indiereign. 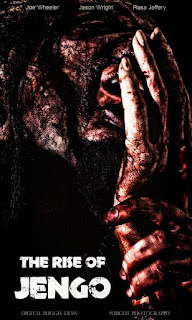 The Curse of Jengo, a prequel to Jengo Hooper, is apparently in the can but hasn’t yet been released. Two further titles, Jengo Hooper Returns and Jengo Hooper’s Cannibal Café(!), are listed as future projects on Wheeler’s IMDB page. Among a number of documentaries that he has directed in the past few years is one non-Jengo horror film, The Curse of Ba’al, although I can’t find any evidence of that having a release of any sort.

A few of this film’s cast play the same roles in The Evil Outside Your Window and/or Jengo Hooper. Several actors have no other IMDB credit except this. One of the few with non-Wheeler credits is Meaw Davis who was also in Le Fear and Thugs, Mugs and Violence.

Joe Wheeler is one of those fascinating names that make the British Horror Revival so fascinating. He clearly has his own following (I can’t believe he’s just selling these films to family and friends) but even serious, hardcore British horror fans have never heard of him. Well, they should. The Rise of Jengo is made with passion, creativity and unwavering dedication and commitment, and the result is something artistic and worthwhile.